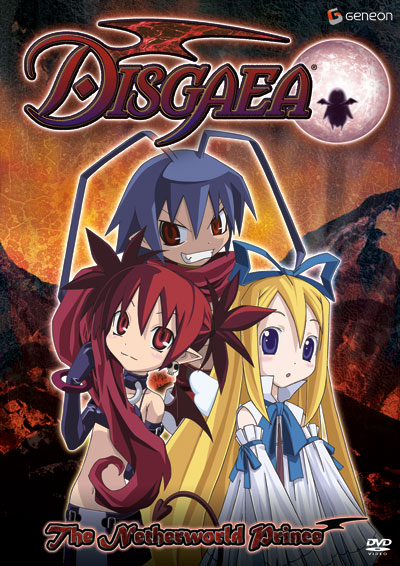 Story:
So the story for Disgaea the anime differs a bit from the game, at least in the progression of the plot. On a mission to assassinate the Demon Overlord king, the angel trainee Flonne visits the underworld. She finds a coffin with the imperial seal on it, but it’s actually Laharl’s, the overlord’s son. Apparently the overlord died two years ago, the exact amount of time that Laharl’s been sleeping.

Obviously something fishy has been going on. Flonne decides to follow Laharl around to show him the meaning of love. Laharl just wants to get the throne back. Oh, and there’s also Laharl’s vassal, Etna and her squad of prinnies. They’re like demon penguin things.

Laharl will have to endure a ton of obstacles, like Vyers (Mid-boss), a rival demon, Captain Gordon, defender of Earth, and filler plots!

Analysis:
To be honest, the plot of the video game wasn’t really that strong, but it was still funny! I can’t understand why the creators of the anime had to completely throw that out and make other crap up. I guess they had to figure out a way to introduce Flonne at the beginning (since Flonne is hot), along with Captain Gordon, Thursday, and Jennifer.

But some of the episodes are pure filler! The anime is only 12 episodes anyway! Why do we need stuff like the episode with the wacky museum? Although it is pretty enjoyable seeing Flonne and Etna reverse costumes…

Some of the episodes are pretty funny, but I think a lot of the charm of the video games is lost in the anime translation. There aren’t even any lines about zombies with horse wieners! I’m also noticing a distinct lack of Pleinair that is very disturbing. Very disturbing.

Character Designs and Art:
The original character designs for Disgaea are great. I love ’em. But the designs they used in the anime are horrible. I understand they need to simplify things to make it feasible to animate, but they really made the characters look weird! Compare the anime cover art, and the Japanese cover art that uses the original character designs. I had this same problem with the manga adaptation of Disgaea, too. Maybe I’m just overprotective of Harada-sensei‘s work…

I’d say that the quality of animation is average. I really like how most demons who have large mouths can talk without even moving their jaws. Really convenient for the animators, eh? There’s some use of CG that I don’t really care for either. For the most part, the animation is consistent, at least.

The Actual DVD:
One thing I noticed off the bat with this DVD was that there was really obvious artifacting in the encoding. Kind of disappointing. After a while I stopped noticing it, though. It’s most apparent when Laharl is shooting off some kind of CG spell. Besides that, the picture quality seemed okay.

The DVD had a few extras, the coolest of which was part of an interview with Laharl’s Japanese voice actress, Mizuhashi Kaori. This is only part of the interview that showed up in the Japanese promo DVD that came out last year. In it, one of the developers(?) tries to get the VA drunk so he can sleep with her. And they talk Laharl’s voice. Pretty entertaining, right?

Another super cool thing about the DVD is that the reverse side of the cover has the Japanese art on it. Y’know, the Japanese cover art that I previously pointed out? Needless to say, I switched it immediately.

For this volume, I watched the entire anime in the English dub. Crazy, I know, but I actually found it okay to listen to. Probably because I had played the game, and it forced the English battle cries, even when Japanese was picked. Apparently most of the voice actors for the English version of the game are in the anime, but Etna. Which is sad because I thought the English Etna had done a pretty good job. The English Laharl, on the other hand, seemed kind of annoying to me. And Mid-boss sounded strangely like a muppet. Seriously!

Conclusion:
I really love Disgaea, so I sort of have to love this anime. It isn’t the highest quality, but damn it, it’s Disgaea! My fanboyism comes first, and it tells me to like this anime. So I will! Honestly, the anime isn’t that bad, but compared to the greatness of the game, it pales. Does that make sense?

Many thanks to Geneon for sending me a review copy of Disgaea Volume 1!

Yeah, I had the same problem. Shindo’s manga was okay, but Hekaton’s manga was good, and all that jazz. A part of me wants me to buy this though, for the same reasons as you.

To tell the truth, I’ve always viewed the Disgaea anime as just one large plothole. Got the DVD anyway because it’s, well…. Disgaea. Fanboy-ness all around, huh?

If you really want to be disappointed, look at the preview for the anime on the Disgaea 2 videogame. I wish we had gotten that instead.

well i dont like the anime .. peh.. i wonder why they didnt continue it though its weird .. are they?? anywho have you seen that mangaka guy chounikku?? i wish he could of drawn the disgaea manga! you should see his work!! ^^

pl bring me the books and doll