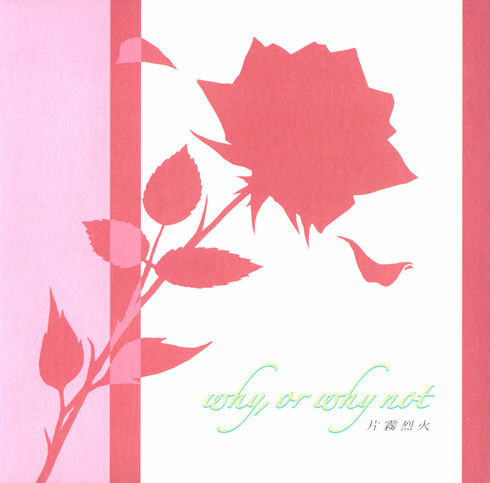 A lot of anime have funny engrish in their OP and ED themes. The ironic part of this is that English fansubbers have to figure out exactly what is said in the Engrish of the Japanese songs! Sometimes the lyrics are pretty straightforward, and sometimes it’s impossible to figure out what is being sung. When the latter happens, the conditions are prime for an Anime Fansubber Engrish Showdownâ„¢!

Since “why, or why not,” the Higurashi no Naku Koro Ni ED, theme was released recently, the song’s lyrics are no longer a mystery! I believe that only three groups had attempted to sub Higurashi: Ayu, Triad, and wind. I’ll give each group one point for each correct line (or line closest to being correct). Get the MP3 if you don’t have it, and let’s go!

Triad and wind tie for getting the closest, two points each!

wind gets the point for getting it exactly correct!

Triad and wind tie again with the exact lyric. Ayu adds a syllable…

Triad gets a point for the exact lyric. Sorry, wind. Close, but no cigar. Ayu has some weird fascination with flying.

Triad gets another line exactly! wind is close again. Ayu wants to be a river now…

Yet another point for Triad! Way to go! Ayu drops a syllable.

Triad gets the closest, so a point to them. wind’s translation is the most touching, though. Ayu’s lyric makes sense, at least.

Triad takes another point! Ayu thinks the ED is referencing scenes from the episode?

Triad gets closest. wind gets a point for being honest. Ayu still wants to fly.

Triad gets the last line and wins it! wind’s lyric conjures up the image of happiness on a boat! Ayu sounds like Yoda!

Final Thoughts:
Triad did a really great job of figuring out what the heck Rekka Katakiri was singing. wind got close on quite a few occasions, and Ayu was in intergalactic space. Despite this, Ayu’s translation actually sounds the most Engrishy. I also liked how wind just gave up on a line and put “(insert line here ;_;)” Note that this competition is all in good fun, and does not necessarily reflect the true quality of a fansub group.

Until next time, Let’s singing!

You just made my day! I laughed so hard reading this!

This is hilarious stuff.

I laughed so much at this entry; amazing! You’re so witty. XD

On a side note, I really love this song. The full length completely blew away all of my expectations.

I have to hold my laughter so hard reading this, since I can’t be seen or heard laughing so hard in my current place..
“Intergalactic space”.. I can still giggling so hard when I think about it..
XD XD XD

You know, I was just thinking the other day how nice it would be if fansubbers would just give up on trying to translate OP/ED lyrics… at least until the single is released and the lyrics can be confirmed. That way, we’re spared both the ridiculous translation and the clutter of subtitles and karaoke effects.

I’ll probably have to keep on wishing, though.

[…] Surprisingly though, these Engrish songs have nice melodies that make up for the lack of comphrehension the listeners and fansubbers face. As a side note though, this song was way better than Black Lagoon’s OP, Red fraction. At least the lyrics retained semblances of human intelligence. […]

You forgot to mention, that WinD changed some lines with upcoming episodes, and came closer to the original lyrics. What you checked was from the first 2-3 eps.
And it looks like Triad dropped the series, they made only the first 4 episodes.

Though surely the point is thathe is not all shrine gods, but a specific shrine god ^_^. Maybe I’ll just download wind’s subs while I’mwaiting for Triad. From the lyrics it looks like they work pretty hard…

ROFL!!! Ayu’s translations cracked me up xD:;
Gosh this post made me laugh so hard (and I’m at work lol @[email protected];; )

Lol! This entry is fantastic.

I always liked Ayu’s subs but after seeing the results here,
I’m a bit wary of their translator now. Hahaha.

I haven’t seen it been announced anywhere(eg. their website) that Triad has dropped the series, perhaps you didn’t bother to actually try to read up on any news about that. So it seems like the project is active but they’re probably just going at their own pace etc.

Now that I listen to the song, I realise that it’s really hard to get the English words out of the song. Credits to the fansubs for even trying to put up the karaoke.

Tell me why or why not complain in your word to mean. Maybe I overlook something better for we.

I found the last two lines were much closer to this, which I found elsewhere..
And after I heard the song closely, I think that yours last two lines appears on the next half of the song.. Not on the first half (anime ED)..

I always knew that Triad’s translations rocked. Now I know for sure!

I keep reading people mention translations. But of what? The song was already in Engrish so there’s no need to translate anything. All the groups have done is transcription. How you can judge a group’s translation on their performance in the transcription of a song with really bad Engrish I don’t know.

Disclaimer: I’m not involved with Ayu nor do I watch their subs. I’ve stuck with Triad’s version since they started. And they have released ep5 btw so they’re still going, aimed at whoever it was that made the comment about them dropping it.

They’re not, you’re missing the point. The point is that this song is so horribly accented that its hard to tell what the heck is being said. It was all in the spirit of fun.

hmm, i compare the lyrics in the album with the song,

the lyric
wind: maybe my happiness set sail waiting for me.
Actual lyric: maybe I overlooked something fatal for me.

i REALLY disagree with the “actual lyric”
my EARS (and my 7 friends) hear really clear, that Rekka Katakiri sing something like “SAIL”

“maybe my overlook set sail waiting for me”. is the correct lyrics, (althought its still not make any sense)
not “maybe I overlooked something fatal for me”

Yes, but for the line “Tell my why, or why not. Complaining way too much,” she pronounces the word “much” to have a freaking “i” sound (which is no wonder why Ayu heard “live”). I think she just has horrible pronunciation, evidently.

>> wind: maybe my happiness set sail waiting for me.
Actual lyric: maybe I overlooked something fatal for me.

Bad lyricist on their part.
Maybe Wind should be the lyricist instead.

[…] The OP sounds really cheesy. It also kind of reminds me of the boss fight music in Final Fantasy VI. I think the guy tries too hard. The ED is better. It has Korean and some not so bad english in it, which is always a plus after hearing songs like “Why, or why not.” […]

WinD changed their lyrics a bit over the episodes. Other than some minor punctuation changes and getting the “guilty of so many incurable sins” line correct (plagiarizing from Triad? =P), there is one major change to highlight:

Actual lyric: Give me a reason why not to adopt in this way

strange.i hear
give me a reason why now do i act in this play.
no matter how many times i listen it,i don’t hear the word adopt

where this actual lyrics came from?

plus
or judge me to be guilty>here comes alone?

he he… Funny stuff but I agree – pointles at sense…Maybe they should’ve all tried to translate credits instead lol?

My that was great. Saw this entry a little late though, didn’t I? xD
Gave me a good laugh… very bad for when I should be asleep and it’s 3am though. Nonetheless, it’s hilarious.

lol, I was searching for it, Thank you very much
I love this song till death, Oh my.. Oh my!! XD

well, I actually hear all the lyrics rightly, except for one word:
“live” instead of “much”
(in the line “complaining way to much”)

PFFFF. You know a song is Engrish-y when Even The Subtitler Is Stumped.

I can’t figure out for certain the lyrics to this line, so I’m going to make up my own version of what I “believe” she said.

I actually managed to get almost (excluding that line XD) all of that correct on my own though I had to ignore the subtitles most of the time!

The sad part is that Ayu’s subs SOUND more accurate…