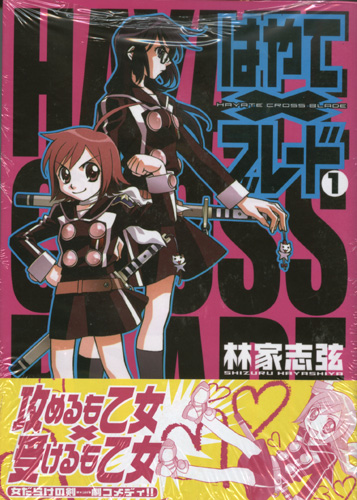 So a few months ago, I got an order from yesasia.com which consisted of yummy manga goodness. Among all of these manga was one called “Hayate Cross Blade.” Unluckily for me, the manga didn’t include any furigana, so I couldn’t read it (I’m kinda bad at kanji)! Just recently, a scanslation group released the first chapter of Hayate Cross Blade, so I was able to use that as a sort of script to read my manga.

It worked out pretty well. Whenever I read furiganafied manga, I tend to ignore the kanji. With this one, I had to look at the kanji, so it helped me memorize (or at least solidify) a few more that I had forgotten. 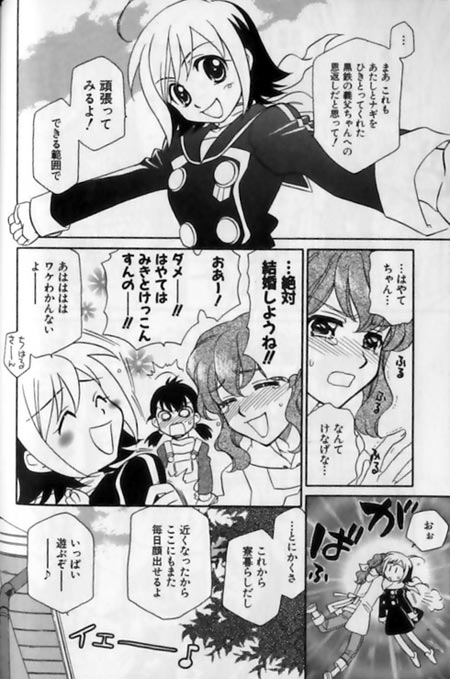 Hayate Cross Blade is the story of a girl named Kurogane Hayate… I would’ve guessed as much. She’s filling in for her twin sister Nagi at Tenchi Academy, who’s currently injured. The Academy seems to be some kind of swords woman school.

There’s some weird system set in place where girls pair up to fight other pairs of girls. They need to collect the others’ “stars” (sorta like a badge) in order to get money and fame. I’m not sure exactly how that works, but they’ll probably explain it in later chapters.

Along with Hayate, we’re introduced to a cool meganekko swordsman named Mudou Ayana. It appears that she’ll eventually become Hayate’s “partner.” Oh, did I mention that this manga falls under the “Yuri” genre?

At this point, there hasn’t been any actual yuri action, but there were a few hints. The excerpt above has a mother and daughter fighting over who’ll get to marry Hayate. Near the end of the chapter, Hayate catches herself falling for Ayana (she’s so kakkoi!). 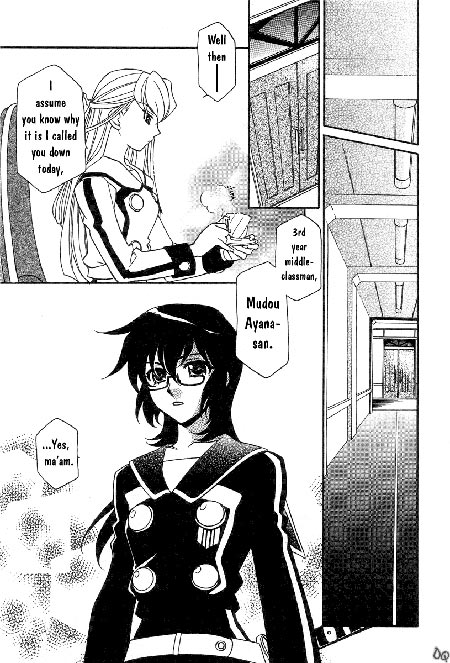 The character designs are really cool (I mean, c’mon, all girls school? Everyone has a sword!?). Hayate is the cute genki girl who’s about half of everyone else’s height. She also goes SD a lot, which is way cute. The meganekko, Ayana, is just really cool. I also really like the uniforms they wear. Giant buttons FTW!

After having bought Hayate Cross Blade without a method to read it, I’m really glad someone decided to scanslate it. The story seems really cool, and I like the art, too. I’m really hoping they’ll turn this into an anime. If not, I guess I can either wait it out for the next scanslation, or buy a kanji dictionary + flashcards…

If I’m not mistaken there was a Hayate Cross Blade anime aback i nthe winter season, sadly no one subbed it.

@Kozu
Nah, that was just a commercial. Everyone was fooled by it though, including me! Hopefully they will turn it into an anime someday…

Hmm…there’s a good chance they will turn it into an anime because “yuri” is in nowadays from what I observed. For some reason, this manga screams “Mai Otome” or “Strawberry Panic”. LOL I guess it’s the yuri…

Mai Otome has Yuri in it!? This may just convince me to watch Mai Hime and Mai Otome…

That insert on AniDB I found earlier really confused me… before I saw the comments on this blog about it being a (fake?) commercial. It shouldn’t say it started on the 31/01/2006 if it didn’t… hopefully it won’t be long before they make an anime version due to Kannazuki no Miko, Simoun, Strawberry Panic, ~Girl meets Girl~ (whatever the Jap name is…), Marimite (couldn’t be bothered to watch past the first ep), that girl from He is my Master and Shizuru x Natsuki in Mai HiME/Otome, all of which were made in the last few years. I think there’s one or two others but I can’t remember the names as I haven’t watched them…

It really irritates me though… why is it that hardly any of us guys are open-minded enough to watch shoujo-ai in comparison to girls watching shoujo-ai and their shounen-ai stuff (which I wouldn’t watch if you er… paid me Â£10? :p)… which just makes shounen-ai more popular than shoujo-ai…

I wish it was some other group that had taken up scanlating HxB though… Otenba are very slow. Usually they take at least a month per chapter… but this project seems to be far more popular than all their others and some person seems to want to help translating (looking at the comments)… so maybe this will be quicker.

Too bored to say anything else. ^^

[…] else? I guess Stray Little Devil and Shinobuden have some yuri “elements”… I have Hayate Cross Blade in Japanese but it’s got […]

I am from Finland and i can only finnsh!

Hayate and Spirou are get married? 😉

[…] not too interested in the novels, but I really do want to read Hayate Cross Blade. I bought it a while back but I later found out that it doesn’t have furigana, which basically made it unreadable for […]

this is a really good manga :D:D just downloaded first 5 volumes of this manga but its RAW can anyone translate it ?? if you really can then e-mail me on [email protected] I’ll send you all 5 volumes but when you finsh translating make sure am the first one to send it to 😛 you are free to share it with anyone too ^^

cool so i’m not the only HxB fan ^^ i think it’s weird that this manga is so unknown and hasn’t become anime. i mean, there are wierder mangas who still become anime