I finally got my Revoltech Yotsuba figure that I ordered at the beginning of the Summer from Yesasia. And NO! I’m not taking this thing to the beach just to be ridiculed by non-weeaboos. I play with my figures from the security and privacy of my own home, thanks very much!

I’ve never really gotten a figure before (the closest I’ve gotten was probably those Disgaea mini figure things) so this writeup will be from a noob’s perspective. 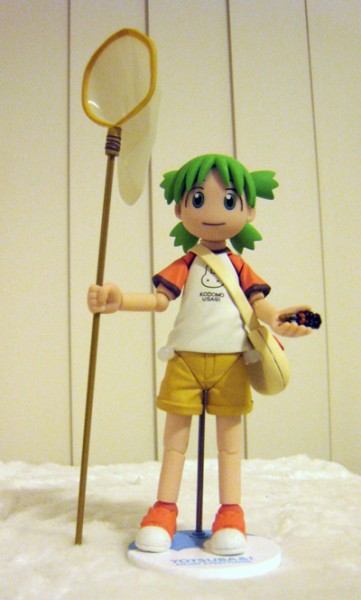 First off, it’s pretty alarming to open the box and find a bunch of disembodied heads and hands. I guess that’s the only way you can change out the features. But still! Maybe put them in a bag or something so they’re not so clearly in view of the complete figure! 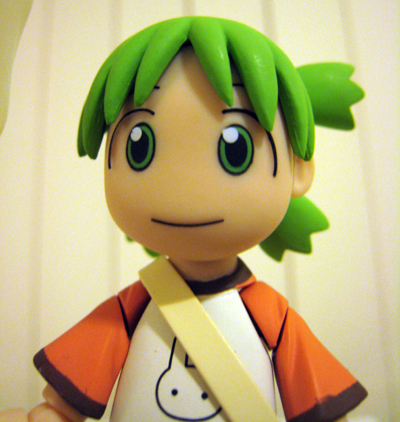 This figure is cool because all the limbs are movable. I mean, the figure is poseable. I didn’t really get very creative, but the box has some pretty interesting poses for Yotsuba. I found that it’s pretty difficult to get Yotsuba to stand upright without falling over. Luckily she has a stand that helps her stay up.

There’s a piece in the package that I have no clue how to use. It’s like a joint, except it has two joints instead of one. Does anyone know what it’s for? I thought it might be to make Yotsuba’s neck really flexible like some kind of Japanese Yokai. Does anyone know the real purpose for the piece? 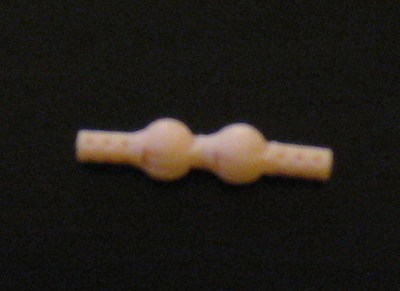 I’m usually not into collecting figures, but this Yotsuba one rocks! Now I just need a few enemies for Yotsuba to fight. Suggestions?

The global economic slowdown that or a Prinny.

Kabitzin: With both denotes it’s lack of usefulness and how it hurts the body when its inflamed.

Are there any other Revoltech figurines of other Yotsuba characters? It would be epic to see her against Yanda or Jumbo, for example. 😛

Besides the Danboard one, there aren’t any poseable Yotsuba figures of other characters, which kind of lowers the potential for fight scenes.

Still, does anyone know what the heck that extra piece is for?

Perhaps the piece is an extra hip joint? From the Kaiyodo web site, the figure includes: “6mmãƒ€ãƒ–ãƒ«ã‚¸ãƒ§ã‚¤ãƒ³ãƒˆÃ—1ï¼ˆè…°éƒ¨åˆ†å·®ã—æ›¿ãˆç”¨ï¼‰” I don’t have any Revoltech figures, so I can’t check to see if it looks like it could be a hip join, but it’s listed as a “double joint”, and what you pictured looks double-jointed to me.

I remember reading about your Disgaea gashapon set several years ago, but never thought I’d see another figure review on here!

If you like poseable figures, then the figma series is for you. And they are perfect for combat. >:3

hmm, i’m getting mine soon too. Just place my order in ebay.

am getting Revoltech’s previous release of Yotsuba too (http://www.play-asia.com/paOS-13-71-8x-77-8-49-en-15-yotsuba-70-2f8v.html), the design seems different compare to this “Summer Vacation” edition, too bad for that. But, hopefully the parts comes with it compatible with both version, talking about more posing possibilities 🙂

Yeah, that’s an extra hip joint that allows you to make your Yotsuba flex more, since the default hip joint is made for strength, but not flexibility. It also comes with the normal Yotsuba Revo, but quite frankly I’ve never replaced mine yet.