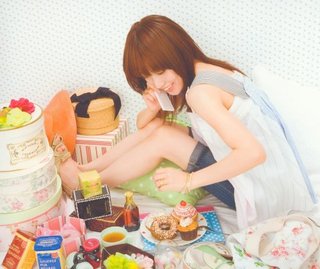 My favorite J-pop-ish group (featuring Nino) is back with a single called “Koi Wo Shiteru.” For a while I thought they had died since their last album was out in August 2006!

So Koi Wo Shiteru is just a short single with three songs and two karaoke versions. Here’s my take on the new songs:

So this song is definitely in Round Table’s “disco” style of playing. I don’t typically like their disco-ish songs. Another example of a similar song is “Dancin’ All Night.” A few extra listens to this song and it’s sorta grown on me though, I guess. The hook is pretty good. I guess my problem with this track is that it’s a little too “pure” in its disco sound. A lot of Round Table songs are more fusion-y. Not really so with this one. It’s also kind of super repetitive.

Symphony is in the Round Table genre of “R&B.” You know, with the clapping percussion and stuff. This one kinda reminds me of Rainbow. Unfortunately I’m not a huge fan of the Round Table R&B genre, either.

This one’s pretty neat. It’s got acoustic guitar and shakers! Nino also does her Nino voice stuff in this song pretty well. You know, the stuff that Nino does. With her voice. This is apparently a demo version, so I’m looking forward to the produced version!

So all in all, kind of a disappointing release. I prefer the Round Table driving rock genre (like, Beautiful or Sunny Side Hill), personally. Hopefully the full album arrives with the type of song I like from Round Table (feat. Nino). Isn’t it about time they just incorporate her into the band?

I also heard this song from Round Table (without Nino) on Nico Nico Douga called “Every Every Every” that was pretty sweet (and in the driving rock style I mentioned earlier, actually). Round Table seems to do well without Nino, so I could probably pick up a few of their old albums if I get tired of waiting for them to release new ones…

I wonder why Round Table doesn’t just let Nino in. I mean, they always seem like they’re doing songs together anyway.

I was thinking about it. Maybe Nino prefers to be “feat.” so she gets her name in the title. Otherwise she’d just be lumped up with Round Table. Either that or Round Table is still testing her out. They were around for a long time before Nino, apparently. Maybe she has to pass a Round Table Proficiency Test or something.

Wow, Last I heard of them was from NHK ni Youkoso, with ~Puzzle~.

Hopefully this’ll be as addictive.

I thought the single was pretty good (Round Table feat. Nino fanboy here! ^_^), but I understand what you mean by a lack of the “driving rock” style. At least we know they’ll create new content!

Hmmm, I sort of like the name “Round Table feat. Nino”. Its somewhat funky and out of the ordinary like their groovy songs! Also, when you stick with a name too long, it sort of grows on you. For instance, when Namco and Bandai (another example is Activision and Blizzard) merged, they couldn’t just think of something new or cancel out one of the groups name! It must be even! Yin and Yang (although I’ll be honest with you, the merged name of “Namco Bandai” and “Activision Blizzard” suck!)

please. the lyrics of song (Koi Wo Shiteru)… thankss