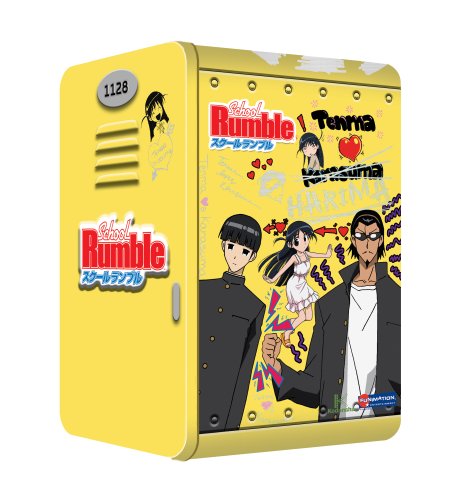 You might think from the title that School Rumble is an anime version of Battle Royale! It is, sorta, except it’s a love battle!

Story:
Tsukamoto Tenma loves this guy named Karasuma. And Harima loves Tenma. This is what I like to refer to as a “love triangle.” Tenma is fairly dense, and so is Harima. Comedy ensues. Need I say more? If you’d really like to know more, here’s the official description:

High school can be hard enough with just academics alone, but when love enters into the picture, it can unravel into a comedy of errors. Tenma has fallen for her oblivious classmate but hasn’t worked up the courage to express her feelings to him. She continually tries unorthodox ploys to confess with a frustrating lack of success.

Meanwhile, the class delinquent has fallen for Tenma and is making similar attempts. While this unlikely trio winds their way through the pitfalls of love and high school life, their friends and classmates become caught up in the chaos.

Analysis:
School Rumble is just a dumb romantic comedy anime. It’s just about generic as you can get, really. What makes it unique are the character designs (I <3 Tenma!). There's a load of cute girls (and guys, I guess, if you're into that) with a balance of cute, stoic, hawt, etc. I can't really decide which one is my favorite. Tenma really is adorable, but no one likes her. 🙁 As of the first volume, we've only seen a lot of Tenma and Harima (and Karasuma, I guess) but in future episodes we'll be getting some Eri action, along with more Yakumo! And those other girls, too, I guess. There are quite a few ways to pair these characters up, but I still like the good ol' Harima and Tenma. People say Eri and Harima are good, but I say: NO WAY! School Rumble is also sorta nice because of the random gags and parodies that occur. I think the gags are probably best in the early parts of this series, then later it opens up to more relationship stuff. You can't beat the reference to Initial D (which I totally understand now)! Other plot devices include Tenma getting stuck in the girl’s bathroom, and Harima getting stuck on an old folk’s bus. Yes, the comedy of School Rumble is definitely not high-brow.

DVD + Extras:
I got the locker starter set thingy to review. It’s pretty cool, as far as metal boxes go. I mean, seriously, what am I supposed to write about a metal box? Besides the box and a small booklet (yearbook), the starter set is the same as the normal DVD. The DVD package itself contains a number of School Rumble magnets! These are actually pretty cool, but somewhat cheap looking. Like something you’d find in a Cracker Jack box. I don’t wanna complain too much about them though, since tacky magnets are much better than no magnets at all. 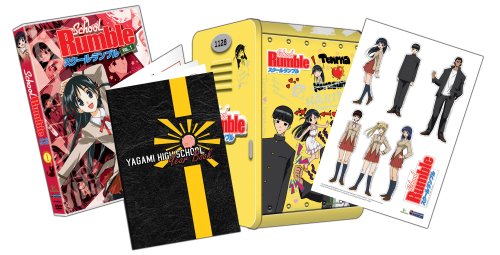 Regarding the actual localization, I have a few issues. I can understand not translating some jokes (like when Tenma tries to write “suki” and talks about skiing), but there were others that totally would’ve worked! There’s the character Harry Mackenzie that shows up later in the series that a character uses to confuse Harima Kenji. The setup works because “Harima Kenji” sounds like “Harry Mackenzie.” But they decided to introduce Harima with the first and last name switched, so he’s like, “I’m Kenji Harima!” Ah, well…

One thing they did get right for the localization was the voice acting! Tenma’s English voice actress is actually cuter than her Japanese one! I usually don’t like the English dubs of anime, but School Rumble’s was actually very, very good. And it was still funny, despite the untranslated jokes (maybe because I still remember them from before, and from reading the manga).

The DVD extras are: Interviews with the Japanese voice actresses for Tenma and Yakumo. They both have fairly bad teeth. Umm, that doesn’t have anything to do with the interview quality though… There’s also some clean OP and ED (I love the ED) and TV spots and trailers.

Conclusion:
If you can’t tell from my blog’s header image, I am a School Rumble fan. Despite being a fairly generic (okay, completely generic) high school love triangle anime, School Rumble is actually really good. I think it has to do with the drool-worthiness of the female squad. Right now it’s only about Tenma and Harima, but I’m telling you, patience will pay off. The Eri episodes (Erisodes?) are worth waiting for. You can just smell the tsundere yet to come.

Many thanks to Funimation for sending me the School Rumble Vol. 1 Starter Set!

I dunno, I always saw School Rumble as a parody on the generic romance set ups, rather than being generic itself. lol, I’ll never forget that Initial D parody. What a nice drift!

I’d consider it a parody, except that I buy way too much into the actual story itself. Like I soooo want Harima to win. Not that it’ll actually happen or anything, but a guy can hope.

This is nothing but good news for me; I recently became a fan of the series and decided to shell out for the DVDs. I typically enjoy dubbing, but if someone who typically doesn’t, enjoys this one, it can only mean that there’s something special about it! Therefore, I’ll definitely be looking forward to finally getting into the DVDs sooner or later.

I for one wasn’t exactly gobsmacked by School Rumble – the first season was okay, the second, less so – but man, does that box look great. Good for you!

How is Yakumo’s English voice actress? Does it have the same soothing timbre as Mamiko Noto’s?

Oh yeah, I forgot to mention that Yakumo’s English voice actress was pretty good too. Though still not as good as Tenma’s.

I agree with Totali that a large part of the show’s humor is the way it subverts the usual romcom tropes and turns your expectations on their heads. That combined with the usual slapstick comedy, and the way they take one-shot gags and run with them, somehow working them into the overarching plotline, and there’s never a dull moment.

I’m quite curious to hear how they did with the dub. I’ve gotten so used to Noto Mamiko, Koshimizu Ami, and Takahashi Hiroki that I have a hard time imagining the dialogue in English. :O

School Rumble is truly amazing. I guess it’s because it’s Laugh-Out-Loud funny every momment, until it’s Cry-Out-Loud sad every momment.

There is lots of character developement, and the main character Tenma is so cute.

It really isn’t that generic. I mean, of coarse it is, but it’s TRYING to be a total parody of them.

School Rumble is awesome, and I can’t wait for the 3rd season.