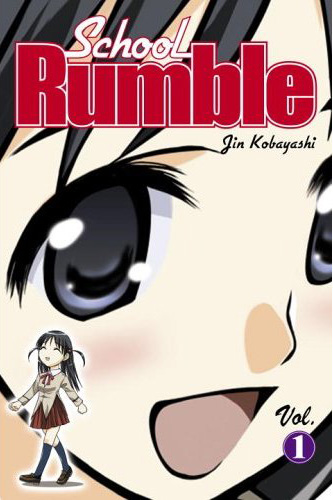 I wrote earlier about the differences between the School Rumble manga in both Japanese and English. Well, I finally finished the first volume after about two months! It wasn’t like I was in a real rush…

I only had the patience to read about one chapter every day, and I didn’t read every day. This is the reason why it took me so long. Sure, I could’ve just read the English version in an hour, but what’s the fun in that? I learned a few kanji and vocab words, so I’d say it was worth it.

School Rumble is just another schoolkids comedy manga. I guess you might compare it to Azumanga Daioh, except that there are both boys and girls, and they act somewhat more normal. This is relative to Azumanga, mind you. The whole coed element means there’s room for romantic comedy! For the most part, though, the romance is just a vehicle for the slapstick comedy.

The main characters of School Rumble are Tsukamoto Tenma and Harima Kenji. Harima likes Tenma, and Tenma likes a guy named Kurasuma. I’ll refer to this original type of scenario as a “love triangle!”

Most of the chapters in this volume deal with either Harima trying to get Tenma’s attention, or Tenma trying to get Kurasuma’s attention. Wackiness ensues. This could mean that Tenma uses a letter attached to an arrow to confess to Kurasuma, or it could mean that Harima dresses as a cop to impress Tenma. Sure, it’s stupid, but I like stupid humor!

In addition to the main two characters, there’s also a billion other side characters. Tenma’s sister Yakumo, the school princess Sawachiko Eri, the tomboy Suou Mikoto, the super mysterious Takano Akira and the kendo guy Hanai Haruki are all introduced in this volume. Judging from the anime, there’s still quite a few characters who need to be introduced.

While the story is somewhat minimal, the interactions between characters is really what makes School Rumble interesting. School Rumble’s character designs are the series’ strong point. Tenma is really cute in that incredibly dumb kind of way. Yakumo is a different kind of cute altogether. Harima is likeable as the tsundere punk with a heart of gold. The ultimate love polygon hasn’t formed yet, but it should in later volumes.

As far as the translation went, I’d say a lot of effort went into making it true to the original. In fact, there were a few parts where I thought the translator made parts a bit too literal! I guess I prefer this to the super liberal translations that come out sometimes. I’ve been told by others that Del Rey is the best manga publisher right now. Having read the manga side by side, I think they’re doing a really good job.

Since this is only the first volume of School Rumble, I can forgive things like Hanai being drawn weirdly or most of the chapters being used for introductions. I’ve seen a lot of the anime, so I know it gets juicy later.

School Rumble Volume 1 isn’t bad by any means, it just gets much better with all of the characters interacting. Volume 2 is already translated, and Volume 3 will be released later this month. I already have the Japanese version of Volume 2, so I’ll probably get the English version to help me through it. Hopefully I’ll have enough experience after that to read the next volume on my own.

I still need to start reading my copies though it’s more likely I’ll wait till I have my grubby little paws on volume 3 to start.

Now that I look at it, the art style really changes a lot. It was more cutesy back then.

I only have two more volumes of the manga left before I have the whole set. Pity I have yet to finish volume three of it. >_

lol. I’m guessing you’ve learned alot of Japanese variations to the word “suki” from this volume. ^_^

tj han: Now that I look at it, the art style really changes a lot. It was more cutesy back then.

I agree. Though it’s not that surprising, considering this is Kobayashi Jin’s first work.