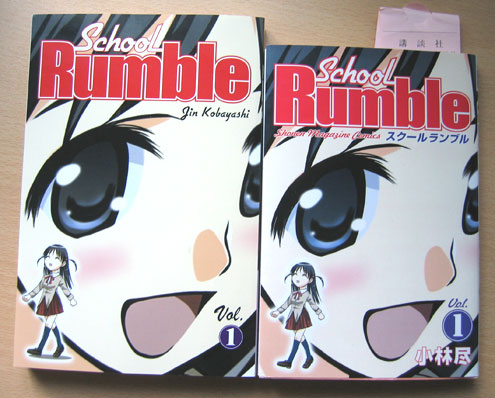 Around March of this year, while on a trip, I happened upon the import manga section at a Borders book store. For some reason, I don’t think that the Borders near my house has any import manga… Anyway, I bought the first two volumes of School Rumble, and they sat on my bookshelf for about 3 months.

Actually, I got through the first three or so chapters using my three years of college level Japanese, and this handy online dictionary! Still a bit too slow for my tastes, though. It took like, 5 minutes per page!

About a week or so ago, I got my Amazon.com order full of manga goodness! This included the first volume of the English translated School Rumble manga. I thought I’d compare the two since they’ve got quite a few differences (besides the obvious language difference).

Sounds like the domestic manga is the winner, right? Not necessarily. I found that the ink on the English version was darker than the Japanese, and thus, the contrast was too low. On some pages, Tenma’s jacket was totally black, and as dark as her skirt. Maybe I’m nitpicking…

The Japanese version also has a cool book cover with color on the front, back, and on the flaps. My new header image is taken from one of the flaps, as a matter of fact.

Let’s take a look inside, shall we? 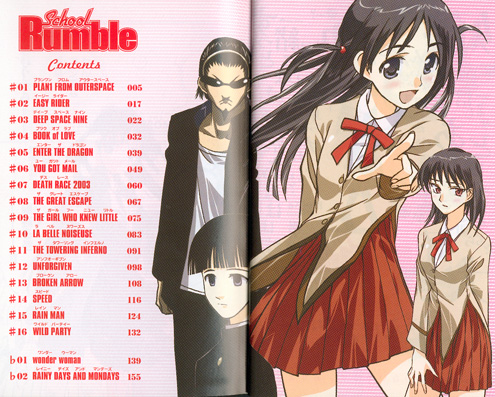 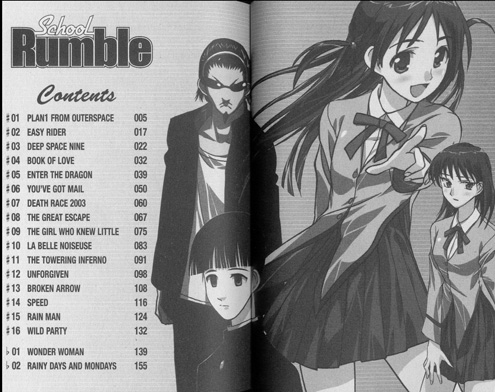 The English version only has color on the cover. Everything else is black and white. The Japanese manga has a few extra color pages which, in my opinion, are way sweet!

As far as content, both manga contain, well, the School Rumble manga… Let me explain how I’ve been reading the books. I keep the Japanese one and the English one open to the same page, and try translating the Japanese before falling back to the English translation. So pretty much I guess, and then check to see if I was right. Still pretty slow, but it’s helping my Japanese literacy tremendously.

The English translation seems pretty faithful (as far as I can tell), and when something is changed, it’s really well documented in the translation notes. While I’d rather have a literal translation with inline notes (since I’m interested in Japanese culture as well), I can understand why they need to change things around. At least the translator tries to keep things somewhat close. Example:

When Tenma is having a hard time writing “Suki,” she writes “Sukii wo shiteru sugata wo shiteru wo mitemitai desu” (I want to see you go skiing?). The English translation (for love instead of suki) is “I load my stuff into the mountains to watch you ski.” So at least it was still about skiing… 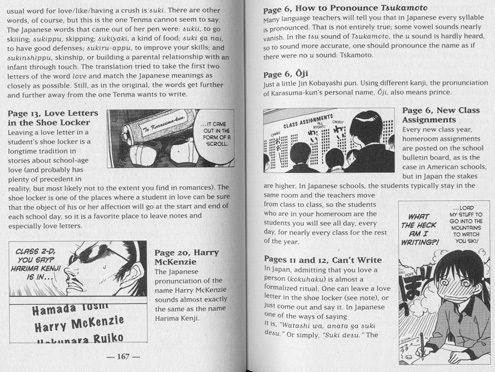 The English version also has translation notes which the Japanese version doesn’t have (duh). These are actually really helpful, because they explain stuff about Japanese culture that I would probably have a hella time figuring out.

I’d say that instead of judging one or the other as the winner, they’re both great together. The Japanese one is sweet because it’s the authentic one, and the English translation is cool, because it’ll help me get through the Japanese one and explain obscure cultural stuff. Overall, I think Del Rey did a good job with this (at least their translator explains his alterations and stuff fairly well).

Sure, together they cost me about $20, but I think after reading through a few volumes, I won’t need the English one anymore. At least, I hope so…

Oh, I should also say that School Rumble is a darn good manga (and anime). So buy it!

The englishv ersion looks good. I read the Chinese translated version and there are no notes at all.

I won’t debate on the merits of learning Japanese alone or with a teacher, but hey, if you want to go solo, might as well buy both manga!

(Seriously hoping to see a “moy” syndrome in you!!!)

And thanks for the comparisons. I think I’d consider the English manga in the future.

I have volumes 1-2 from Del Ray and the Japanese volume 1. The first thing I noticed was that, indeed, the JP version had noticeably smaller form factor. The thing is nearly pocket-sized. The second is that the page color is different from the EN version.

The EN version is a pure white colored pages whilst the JP version is almost a faded yellow on its way to white. It’s not because it’s older, but simply because that’s the way it is, as other import title I own have the same deal.

Also, the cover is a removable glossy softcover, which hides away an orange repeating text background (SHONEN MAGAZINE COMICS over and over) and the words, “School Rumble Volume 1”, and then the age rating.

I dig how the removable cover has a little extra art on the inside folds. The copy I grabbed also had a second piece of paper with an add for School Rumble Ni Gakki on it.

But joy of joys, rubi hiragana on nearly all kanji. Perfect for those of us who don’t know many~

Also…extra points to the JP version, as it came with a bookmark. :p

I have said it time and again, and I like to use my knowledge of Japanese culture and what I know of the language as a basis for believing me when I say it… Del Rey does a FABULOUS job bringing things over.

In fact, when I am looking for new titles, I tend to skip TOKYOPOP and especially Viz because they butcher things.

But, that is why I did my interview with translator David Ury. People don’t look at who is translating their books, or what company is doing it, they just grab up whatever, but using the company, anf further, the translator, you can start to get a feel for who is putting out good, and closer-to-original manga.

As a side note, I hate School Rumble. It hasn’t made me laugh once. Maybe I’m broken?

“Del Rey does a FABULOUS job bringing things over.

In fact, when I am looking for new titles, I tend to skip TOKYOPOP and especially Viz because they butcher things.”

Oh, for sure. They tend to leave much more of the original flavor, even if it isn’t the easy way out translation-wise, which I super-appreciate~

“[School Rumble] hasnâ€™t made me laugh once. Maybe Iâ€™m broken?”

That could be, or perhaps you are…fixed (for lack of a better word) and everyone else is happily broken~ ^_^

Yeah, I think my college’s Japanese program is pretty crappy, though.

Mostly the vocabulary is the part that confuses me. Grammar and stuff like that isn’t a big deal, so I have to look up every word I don’t know. Plus I’m pretty bad at remembering kanji.

Maybe 5 minutes is exaggerating. Probably more like 2-3, but I’m getting better!

I salute you guys. Sometimes it takes me a good 15 minutes to go through a single page of japanese to authentically translate it as a professional translator.