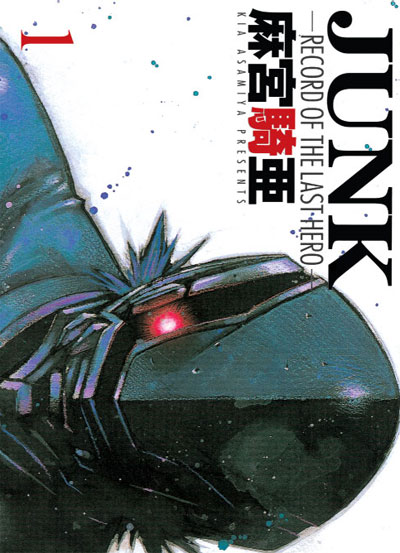 Book Blurb:
Hiro is a high school student refusing to go to school after a traumatic run-in with the local bullies. But his feeble life is forever changed when, one day, he applies online for a new gadget called “JUNK”. Once the mysterious package arrives, he activates the gadget and finds himself encased within a powered armor JUNK suit.

Apparently “the clothes DO indeed make the man” as Hiro is granted abilities far beyond anything the muscle-bound jocks at his school could ever dream. Soon after, he embarks on nightly rampages getting back at the bullies and destroying property until he discovers… There is anothe with a unit nearly indentical to is own.

The owner of the other JUNK suit is a woman who’s not too keen on Hiro’s abuse of his new super-powered threads, and smacks him around real good for it. To complicate matters even further, he accidentally destroys his home and kills his parents! Now, a naive boy must learn to fend for himself and choose to use his power for good or evil.

Analysis:
First off, I commend the author of Junk for naming the guy who is the “hero” of the story “Hiro.” I thought Heroes did this first, but obviously Junk was created before that TV series.

Junk starts off quite a bit like Rozen Maiden, but it’s not too long before the plots split off. Both feature hikikomori guys shut in their houses ordering mysterious things from the internet. While Jun gets a doll, Hiro gets a watch that turns him into a powered-suit wearing super man! I think Hiro is better off.

We quickly learn that when given super powers, hikikomori will become evil. Sure, he beats up a few thugs and the bullies who were the reason for him becoming a hikikomori in the first place. Those I can understand. But after that he kills his parents (probably accidentally) and doesn’t think twice about killing someone for getting in the way of his private autograph session with a famous pop idol. Well, maybe if it was Hirano Aya, I could understand… It’s a good thing Hiro didn’t go to Anime Expo…

Hiro finds out there’s someone else with the same suit as him. A girl no less, and in a white suit! What, so the black suit is automatically evil and the white suit is automatically good? Pshh… The white Junk fights at a higher level than Hiro, mainly because its operator read the instruction manual. I’m not even making that up. Hiro needs to swallow his manly pride and RTFM! He constantly gets pwned by the white Junk in the meantime…

I can understand why people like Batman. He’s the face of vigilante justice, kicking criminal ass above the law. But Hiro is just kind of an asshole. It’s probably somewhat realistic though, if you think about what a normal hikikomori (oxymorn) would do given powers. But still, I find myself rooting for the white Junk to win. I wonder if that’s a bad thing?

Character Designs and Art:
The suits are awesome looking, but the actual characters are FUGLY! Hiro’s cousin looks like a dude. I’m really not digging the character designs. But the actual art is great. Most of the manga is action anyway: explosions, jumping, slashing, punching. It looks good, and that’s what’s important. At least the idol is drawn somewhat decently.

Conclusion:
I don’t like the main protagonist of Junk. He’s like an anti-hero, but so anti that he’s basically a villain. Is this the reaction that the author’s trying to get? Maybe the next volume will shift the protagonist’s viewpoint to the white Junk? That’d way awesome, but I don’t think it’ll happen. I do see a twist occuring though, where maybe Hiro’s cousin or the idol are the true pilots of the other power suit! Dun dun dunnnnnn!

Many thanks to DrMaster Publications for sending me a review copy of Junk Volume 1!

I thought the “Junk:” portion of the title really signified the manga was Junk o_o

Shyeah, that’s also a valid interpretation. I’m sure the hikikomori in Japan love Hiro as their anti-hero, but I can’t really relate at all.

I could not stand the “hero,” either. I didn’t enjoy the book as much as I could have because he’s such a jerk!

I suspect the first Hiro-hero was Hiro Protagonist, the Deliverator, in Snow Crash.

just picked up volume one and two and i must say i am not that disappointed. The artwork is up to par and the storyline is not shabby. Its a good read. will be waiting for volume three.