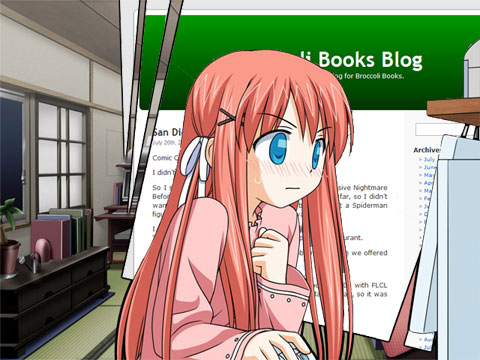 I agree with you on the Del Rey blog stuff – I think they should continue. I don’t know that Del Rey Manga on its own is an especially large company in terms of staff though.

And Newtype sort of has one on their front page. As a magazine owned by ADV, do they count?
http://www.newtype-usa.com/

The Vertical blog is a regular stop for me. Anne Ishii finds some wild stuff, often major publication writers that read two mangas and have seen Akira, so they are now the local expert on Japanese media. Funny stuff.

@Sarah: Cool, thanks for the links. I guess I’ll have to do a follow up. I didn’t realize Icarus was a publishing company. I just thought it was a regular manga blog…

Can someone tell me where this picture is from.
i think i know it, but i can’t remeber.
thanks. 🙂