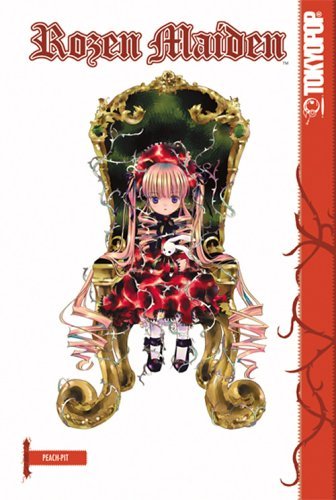 Story:
Sakurada Jun is a middle school hikikomori. He should be in school, but he prefers to hang out in his room mail ordering random stuff and returning it right before the grace period. His sister takes care of him, even though he’s really mean to her.

One day, he gets some weird letter explaining that he’s won a special prize. He claims it (with wind up action), feeling this will be really good luck. The next day, a suitcase comes with a really sweet doll in it! No, not one of those dolls…

Jun winds up the doll and it suddenly comes to life, slapping him for not holding her correctly. She explains that her name is Shinku and demands that Jun bring her tea. Talk about high maintenance!

From this point forward, Jun pledges loyalty to Shinku. This means a whole lot of fighting other dolls, going into portals and other general weirdness. Oh, and everybody’s favorite Suigintou makes an appearance!

Analysis:
I’ve seen the Rozen Maiden anime before, so I guess I can’t really review the manga without comparing. The anime stays fairly close to the manga, from what I remember of it.

The story is still developing, but you can get a good feel for what’s going to happen. There’s a lot of lighthearted comedy mixed with really serious issues. Like one second there’ll be a joke about how Shinku thinks the toilet is a cool looking table, and then the next Jun will be facing his social disorder. I think it’s a pretty good mix though it does make for a sorta schizophrenic experience.

Knowing what will happen next also means that I’m probably more forgiving to the manga than if I had never seen the anime. It seems to be going really slow. Like Hina Ichigo hasn’t even shown up yet! I need some Suiseiseki action stat!

Character Designs and Art:
I had never actually seen the manga art before compared to the anime art. I think for the most part, the manga looks a lot better. The art is just more refined. Plus I think Shinku looks a lot cuter in the manga than in the anime. She comes off as seeming kind of cold a lot more often in the anime than the manga. Like the anime, the manga goes into SD mode a lot. I think it’s appropriate for the effect they try to get. Plus SD Shinku is sooo cute.

The Actual Book
The cover for the book is really sweet. I think it has some kind of IR coating or whatnot applied. Too bad there’s no color inserts or anything. I also noticed there wasn’t a glossary to define terms like ‘hikikomori’ though I guess they never actually use the term.

Tokyopop left a lot of the Japanese sound effects in, but didn’t translate them. I really don’t think it would’ve taken that much more effort. I know a few sound effect, but not all of them, so it’d be nice if they translated them in future installments.

Conclusion:
Rozen Maiden is just a really high quality manga. The art is great, and the story is developing nicely too. There’s a good mix of humor and seriousness, though it might be a bit strange to transition between the two. I really like this manga. Hopefully the American releases will happen more frequently as the manga gains popularity. And yeah, I’m seriously awaiting the cardboard box fort battles.

Thanks to Tokyopop for the review copy of Rozen Maiden Volume 1!

I started reading the manga back around Christmas after watching the OVAs.

One thing you forgot to mention though was even in Vol. 1 of the manga Laplace showed up. Where as in the anime he didn’t show up till the second season.

Then in the 2nd Volume, all the Desu has been replaced by “yes”, it was a sad day when I discovered this.

But even still I’ve been enjoying the manga, and will totally force it onto my friends.

Whoa, whoa, whoa, “desu” replaced?? I guess it’s kinda expected.. but yeeesh, that really burns. You can’t really get much run out of “yes” as a catchphrase :/

I actually wasn’t too fond of the artwork for some reason.. but despite this I’ll try to go along with this, just coz the manga goes in a different direction to the anime apparently.. no desu tho… orz

The only person I can think of who says “yes” at the end of every sentence is Megatron from Beast Wars.

that sucks!!!!!!!! i don’t get it.. what’s that horribile drawing??
i’m better than that! i do manga books to but much better than that! trust me! and i’m still 14!…but the guy with glasses was hot..i think! well then…. sayonara! jane-jane!

..but the story was cute…and i didn’t want to be a”donky” with my comment!…i thing that’s all!

so try your best! ..if you don’t do it you must eat my dust,you dust eater!..i’m a girl but i’m very strong! so…watch out!
sayonara everybody..again.