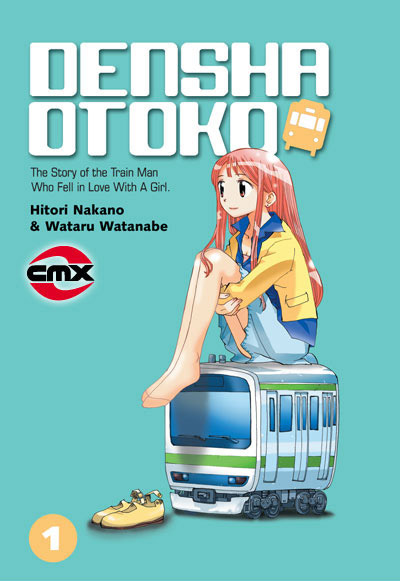 Densha Otoko is the story of the train otaku who found love with a little help from 2chan. I’ve never seen the live action or any of the 4 (FOUR!!!) manga that were adapted from the novel. First up is the CMX version, entitled “Densha Otoko.”

Story:
Train Man (we never learn his name) is a normal otaku. He’s kind of a wimp and has never had a girlfriend. I think we can all relate… Or is that just me? One day, while in Akihabara to pick up a “Frog Soldier” limited DVD set, he sees a cute girl smile at him on the train! No way!

Later, when a crazy drunk starts swinging his big fists around, Train does the unthinkable and fights back. He impresses all of the ladies plus the cute girl and gives out his phone number and address for thank you gifts. With no one else to talk to about his day, he turns to 2chan. Instead of getting totally flamed, he gets a lot of sound advice from jealous otaku.

Finally, one day a pair of cups arrives from the cute girl. The cups are from a designer brand called “Hermess,” and Train decides to call the girl this. Eventually, Train builds up the courage to call Hermess and set up a date. Astoundingly, she agrees! 2chan bustles with excitement and they all help Train get ready by suggesting restaurants and fashion.

At the end of the volume, Train meets with Hermess to begin their hot date.

Analysis:
Yes, the first volume doesn’t even contain a date of any sort. This story goes by really slow. Then again, when you’re an otaku, even having a girl smile at you is quite a milestone. Um, not from personal experience or anything…

I can definitely relate to Train, though not 100%. Because of this, I really think the story is fascinating. It really has a sort of universal appeal. People want to help this guy get a date because he’s an underdog who did something courageous.

It’s pretty funny seeing all of the different types of people on 2chan illustrated here. I’m pretty sure there aren’t really any bodybuilders or girls there. Obviously this manga is a work of fiction.

Character Designs and Art:
I really like the character designs. I think the other manga versions of Densha Otoko are a lot more shoujo-y than this. Like I stated before, the 2chan characters are pretty interesting, though totally unrealistic. Train himself doesn’t seem like that much of a “poison man” himself. I mean, do glasses automagically make a guy undateable? I hope not.

The art style is very sketchy with mostly hard lines. The attention to detail is pretty cool. Like Train’s room will be full of awesome nerd crap like unopened boxes of figures. I don’t have any complaints about the art.

The Actual Book:
The book itself is of fairly standard quality. The cover is pretty thin, making it feel more like a cheap novel, but there’s some nice folding color inserts!

Conclusion:
Densha Otoko is a story I can relate to, however sad that may be. You can’t help root for Train, since he’s trying his best to make a change in his life. The art is really good, and the characters are interesting, too. I believe the second volume of this manga is already out, so hopefully I’ll be reviewing it soon.

Many thanks to CMX Manga for providing me with the review copy of Densha Otoko.

Whoa, four manga from that one story?
Japanese love to milk anything as much as they can, don’t they?

The only variant I’ve seen so far is Ocha Machiko’s one-volume shoujo version. I decided to pass on that one – shoujo art isn’t exactly my cuppa – but I’m keeping my eyes peeled and my wallet ready for the CMX and Viz versions.

Boy can I relate.
The TV series was 10 90 minute episodes. I watched all of them. You can get them on youtube sometimes, if you are lucky. You can also order them over the web. They are great, if kind of teary.
It is realy funny watching the poor train man tear himself to pieces trying to change into something he is not. And she dosn’t want anything but the real deal.
Funniest part is when she introduces him to her mom. (He is way shorter than her)