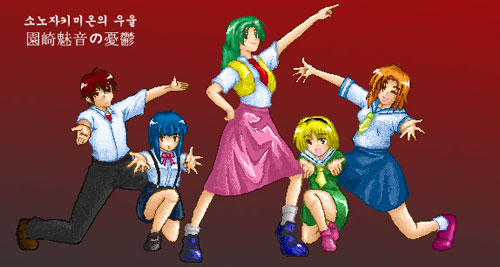 Okay, so maybe it would be best to wait until the season is actually over to announce the best anime of Spring 2006, but I wanna know now! We’re more than halfway through this anime season (for the 12 episode shows, at least), so I think that by now the anime will have shown their true colors.

Also interesting will be the difference between the pre-season anime poll I took and the current one. Back then, School Rumble Ni Gakki won it hands down. Next was XXXHOLiC and third was Strawberry Panic! What a difference actually watching the anime makes, huh? Actually, I still stand by School Rumble, but SP?

Suzumiya Haruhi no Yuuutsu wasn’t even on the list, and was really the sleeper hit. I’m not really sure about how well it’s doing now, though. I still like it, but watching Yuki read is not my idea of an awesome episode.

Higurashi no Naku Koro ni was also absent from the list, and it turned out to be pretty good too. Maybe that’s evidence that too much pre-hype will kill an anime, while no hype at all will help its chances of gaining fandom…

At this point, my top picks are still School Rumble, Ouran High School Host Club,
Suzumiya Haruhi no Yuuutsu, and Higurashi no Naku Koro ni. Kamisama Kazoku is starting to get interesting, too.

And as always, if there’s an anime that you want to vote for but isn’t on the list, drop a comment and I’ll put it on the poll (as long as it’s not Air Gear or Glass no Kantai…)

I have to been meaning to ask, but why does Fate/stay night (as well as a few others) never show up for these polls?

Anyways, while I have been seriously digging Ergo Proxy and Fate, they aren’t here. School Rumble Ni Gakki and Suzumiya Haruhi no Yuuutsu are the only true contenders for me. *Sigh* Heck, I’m going to go with School Rumble this time. It certainly isn’t a wrong choice by any means~

*Votes for killer lolis*
Kinda unfair to Haruhi having this poll soon after episode 9, since many people haven’t had the chance to see episode 10 yet…

Sadly I dont see Ergo Proxy on here, so Black Lagoon it is.

@morph
I consider Fate/stay night being in the Winter category, so that’s why it’s not on the Spring polls. I guess Ergo Proxy could be either (Didn’t it come out in Feb?)

@Lina
Unfair to which Haruhi? 😉

You left out Simoun… *sob*

Seriously. I love both of the Haruhis, but Simoun is just utterly brilliant.

This is a no contest…

The hell is Ergo Proxy and Blood at? Guess I’ll have to go with Haruhi because everything else on the list is a waste of time.

Garasu No Kantai. Sorry! (Not really sorry – I think it’s ace. It’s the only show I consistantly look for every week). It hasn’t got the best animation. In fact, it’s often pretty bad. It’s plot is pure cheese. But I really really like it. I think it’s well pitched melodrama, with the right amount of humour played straight.

(Haruhi isn’t even on my radar; I couldn’t care less that everyone else is talking about it; it’s a growing-steadily-unfunnier one trick pony. I’ll stick to my steady Glass heresy. ^-^)

No Ergo Proxy? It’s not as if I’d vote for it right now, but episode thirteen has been nothing short of awesome. Check my site for the summaries. I’m going to vote for it if it consistently delivers like it did with ep. thirteen.

“watching Yuki read is not my idea of an awesome episode”

Well, i hope watching Yuki doing… what she does in ep.10 IS your idea of an awesome episode 🙂

Even if the season ain’t over School Rumble ni Gakki is tops!!
Then Ouran High School Host Club comes in a close second.

And the only anime that had me downloading a raw was Ergo Proxy…though I stopped at only one episode since I could only completely understand two sentences. Maybe I should start getting serious about my Japanese studies now…

No Aria? Oh well… I guess it’s a second season. Then again, so is School Rumble.

This was actually a tough choice, but before I knew it, I had cast my vote for Nana. Can’t argue with my sub-conscious, I suppose.

I guess I’ll vote for Suzumiya Haruhi, which really is the best anime of this or any recent season (and episode 9 was the best so far, for me). But a close second is Simoun, which has a lot of human depth, a real SF story, and is extremely well made. As Futaba said, it’s really quite brilliant.

I don’t watch fansubs, so perhaps I’m not entitled to a vote, but two series I’ve been watching people talk about are “Binchoutan” and “Renkin San Kyu Magical? Pokaan”.

I don’t get the impression that the second one is anything other than a fluffy fan service vehicle, so maybe it doesn’t belong on a “best of” list. But most of the reviews I’ve been seeing of “Binchoutan” have been enthusiastic.

2 votes for Simoun? Okay, I added it and adjusted the poll accordingly.

At the moment, it’s The Third, though that can change any time.

I’d indeed like to see such a poll when the spring season is completely over. In this case, this would mean around the end of the year, when Saiunkoku Monogatari finishes.

Heh, the reason why Fate Stay Night could not be on the poll is that it obviously won’t get any votes ^_^

I vote for School Rumble Nigakki, Its been the most consistently good anime this season…none of the episodes has been a letdown

wait there’s no ergo proxy?! ahh!! its hard to pick with just both haruhi’s and rena around.. also revy’s not bad either.

How about adding Soul Link? If not, I’ll vote for Ouran High School Host Club.

“I consider Fate/stay night being in the Winter category, so thatâ€™s why itâ€™s not on the Spring polls.”

Gah, I didn’t catch that~

I have to say people are down on episode 9 (or the ending in Haruhi’s version) but I say it’s the episode that won me completley over… Before I loved the series but didn’t care so much for Haruhi, now that I seen her other side… She’s won me over and that’s all thanks to episode 9…. Making this series the top this season among some good series.

I voted for Ouran. It’s become one of my favorite anime ever.

I go for Black Lagoon because it’s unlike anything else out there. No school girls, nothing cute, no mechas, no ninjas, no anime cliches but down to earth and it doesn’t even take itself too seriously.

I know I am totally alone in this, probably, but… WHERE IS HIMAWARI?!

Come on! That show is a bit slow to start, but it’s still a good bit of fun. It’s on my “watch as soon as it comes out” list along with FSN, Haruhi, Utaware and Magipoka. So, I guess you had most of my picks on the list, so ignore me and I’ll just vote for one of the other ones. I guess I will need to check out Higurashi No Naku Koro Ni now too. Oh, and Air Gear isn’t THAT bad for an Oh! Great story. I mean, Tenjou Tenge was a train wreck (manga and anime both). Mostly, I just want to know if the DVDs will be uncensored (damned crow).

@Randall
I actually really like Himawari too. But it would just depress me to see it on the poll with what, 2 votes? Plus I gotta make a cut somewhere (40 things on the poll would kick my sidebar’s butt).

No one mentioned Aria the Natural. I don’t understand. No one liked it?

I think ergo proxy is the most popular in the comments. I back that up!

Ouran was the best anime of Spring 2006 hands down.

omg
i love ouran high school host club!
its the best ever!!

Much has been said and discussed the crimes committed with the
aborigines from the white man, but it has to be remembered that the blacks
got great provocation. Father found its way to Melbourne a very sick man, and
the man immediately underwent treatment by specialists for
his throat trouble. Juni, als BombenanschlÃ¤ge in Kathmandu und anderen StÃ¤dten
Nepals acht Tote und 22 Verletzte forderten.