If there’s one thing I fear most while reading anime blogs, it’s spoilers! Whenever I see a potential spoiler, I scroll down as fast as I can and try to forget what I saw. Sometimes it’s too late, and the damage is done.

It doesn’t have to be this way, though! I found this wordpress plugin that can hide spoilers until the reader gives consent to view said spoiler. It’s really simple; you just use spoiler tags <spoiler> and </spoiler> with the spoiler inbetween.

Check out the plugin in action: 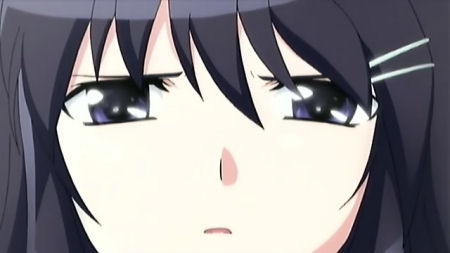 In Hantsuki, Rika-chan is really a guy, and her heart’s not really messed up; she’s actually getting a sex change operation! When Yuuichi finds out about this, he turns to Akiko and her friend for some yakuza three-way lovin’!

You can get the plugin here, or get the zip directly here (because the .phps file is less simple to install).

Note: I tried this plugin previously on WordPress 2.0, and for some reason it didn’t work. When I upgraded to 2.01, it worked fine. The plugin itself was designed to work for 1.5, so I don’t see why it wouldn’t. If you’re still running 2.0, maybe it’s time to upgrade?

PS: This plugin also supposedly works in the comment forms too, so spoil accordingly.

I had read about something like this, but thanks for posting the link!

Ohhh, lovely plugin! Thanks for the FYI.

[…] tag before spoilers, but sometimes that breaks things up in unnecessary ways. Thanks to Hung, Sea Slugs! is now using a plugin that allows for simpler spoiler-hiding. I did a few experiments, […]

[…] spoiler plug-in (by Leong Wai Kay, third hand via Hung) was a bit more tricky. I didn’t write the syntax correctly for spoiler in the kses.php file […]