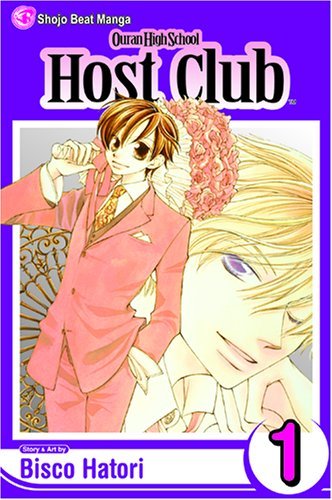 Today I take a look at another manga from my Shoujo Beat sampler: Ouran High School Host Club.

Ouran High School Host Club follows the story of Fujioka Haruhi, a poor female student attending a prestigious high school on a scholarship. While looking for a quiet place to study, she inadvertently stumbles into the Ouran High School Host Club. It’s sort of like a bizarro Otaku Maid Cafe where a bunch of pretty boys serve girls. She ends up breaking a really expensive vase and becomes an indentured servant to the host club. Did I mention that everyone in the club thinks she’s a guy?

Although the plot sounds painfully generic, the characters really liven things up. There’s the narcissistic club leader Suoh Tamaki, the Yakuza son Ohtori Kyoya, the Hitachin yaoi twins, the loli Haninozuka Mitsukuni, and the silent type Morinozuka Takashi. I’d guess that all of these “personalities” are just gimmicks to get more girls to patronize the club, but maybe these guys are really just weird like that. 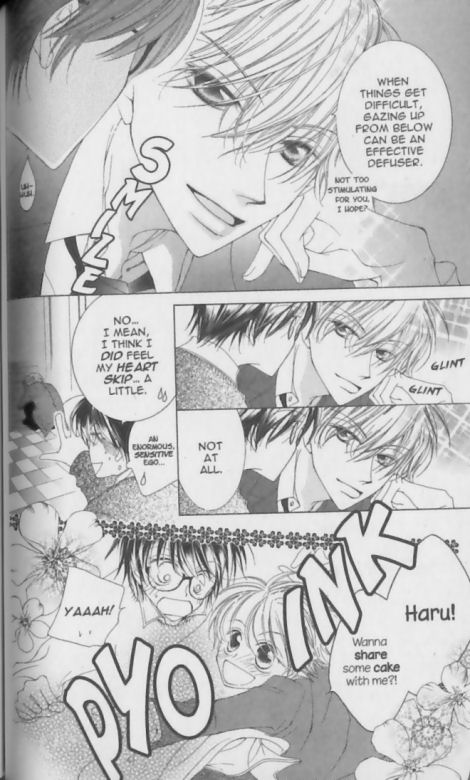 The artwork in the manga is pretty average in my opinion. I’m not really a fan of the bishounen look (and that’s probably a good thing). I prefer super deformed wacky characters, and there’s not much deformity in this manga (unless you count the super small loli guy). I also noticed a text overload on a few of the pages. It was hard to see what exactly was going on since there was more text than drawing. Some of the translations were also worded somewhat strangely (WTF is a “Dogsbody?”).

Overall, I’d say Ouran High School Host Club is somewhere between above average and good, mostly due to the craziness of the characters. I’m not a huge fan of the art, and I got lost in a few parts (did they flashback or jump to the future?). The plot, though generic, seems interesting enough, if the execution is done right. If I were looking to pick up some shoujo manga (I’m not), I’d probably give the first volume a shot. Otherwise I’ll just watch reruns of “Bosom Buddies” for my fill of transgender comedy.

“Dogsbody” is an English (as in England) word for someone who is forced to do all the dirty little jobs for someone, like cleaning up, going to get things, etc. It’s sort of like the American word “go-fer,” only worse.

I love this anime. ITs funny. Too bad ot lacks romantic parts but its hilarious. I want to read the manga though. All I have been doing is watching the anime.

Twincest Forever! What I love most about this anime are the characters are so different and putting them together really make the anime shine. Haruhi has to be one of the few female leads that I can tolerate because she’s not a conventional female lead. Anyway, I like it a lot.

Yeah, I noticed they used some types of “british” slang in their a few times. I have no idea why…unless I guess the editor is british?

[…] Penguin Revolution is a shoujo manga that contains neither penguins nor revolutions. But it does have a lot of crossdressing! If it worked for Ouran High School Host Club, it should work for Penguin Revolution, right? […]

is there any way to buy this in england? If not in shops…on the internet?!!

I love how the twins ‘Little Devils’ show their “brotherly love” for each other in front of the girls (that always drive them crazy). This anime/manga is so funny, has some drama, small bit of romance, and a great story line. I can’t wait til the anime comes out in the English version, but I wounder who will play the voices for each character in the series. They’d have to be good voice actors and know how to bring out the characters’ personality.

[…] Heavenly Hockey Club is like one part Ouran High School Host Club, and one part Mighty Ducks. Except in this version of the Mighty Ducks, the team sucks hard and […]

Ouran Koukou Host Club was one of those mangas that you have to read onward to like it… the first volume was okay, but i liked it a lot more when i got into the second volume.
and of course, the anime was fabulous. But the manga is better [strangely enough, huh?] it has more plot line and you only learn about the other characters in side chapters. The anime follows the manga well too.