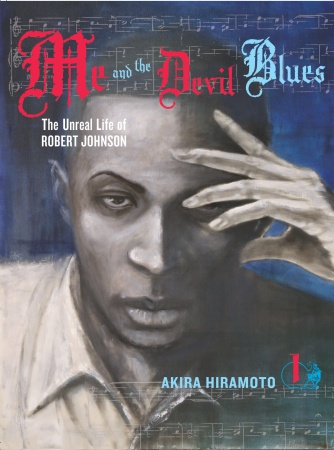 Book Blurb:
Legend has it that if you take your guitar and stand at a crossroads at the witching hour, the devil will appear. Heâ€™ll grab your instrument, play a song, and hand it back to you. Youâ€™ll walk away an expert bluesman, but youâ€™ll have to pay the price: your immortal soul.

The year is 1929. Deep in the Mississippi Delta, a young man named R J dreams of becoming a bluesman. R J is a simple farmer who can barely play guitar, but when he takes a midnight stroll, his life is forever changed.

A phantasmagoric reimagining of the life of legendary blues great Robert Johnson, Me and the Devil Blues follows the journey of a man who really did sell his soul to the devil. Why not come along for the ride?

Review:
I’m a pretty big jazz fan, and I also dig stories about people selling their soul to the devil. It’s just a theme that can be told over and over again, either literally or figuratively. I didn’t know much about Robert Johnson, but apparently this book isn’t really about him anyway. It’s just slightly based on the myth about his deal with the devil.

With his wife pregnant and expecting in a few months, RJ spends his days working on a farm and his free time “learning lullabies” at his local blues joint. RJ is a noob at guitar, but his goal is to become the greatest bluesman in the world! To do this, he doesn’t go through tons of volumes “powering up,” he just wanders around the crossroads and cemetery to make a deal with the devil.

The first part of the book is actually kind of confusing, mostly because RJ wakes up to find that he’s a total pro at the guitar and that he’s jumped ahead into the future! Also, his wife and baby are dead. I guess that’s the price you pay for dealing with the devil. Disowned by his family, RJ sets off to make his fortune as a bluesman. This is where the story really gets ridiculous. I guess I shouldn’t spoil it. I’ll just say that RJ gets into a heap of trouble along with an infamous criminal from the same era.

Generally speaking, this manga is pretty whacked out. The art goes from being somewhat comical at times to being uber-serious to being downright demented. The story takes place in the Southern States in the 1930s, so there’s some rampant racism and other social issues present. Since there’s so much about the real Robert Johnson that is unknown, pretty much everything in the manga is made up. It feels a bit like false advertising, though the cover does say “The Unreal Life of Robert Johnson.”

I think the book is more interesting as a cultural case study. It’s a manga about an American figure written by a Japanese person, then translated back into English. Not surprisingly, there isn’t a section in the book explaining honorifics and the meaning of “itadakimasu!” because no one in the manga uses Japanese mannerisms. Though honestly it would be pretty amusing to see RJ do the orz thing or bug his eyes out or have a giant sweatdrop appear on his head.

I think it’s safe to call this story fiction. Only a few actual facts and real people were used to seed the story. It can get a little cheesy at times since the topics are American (and therefore closer to history for me than to a Japanese person). But overall, the manga can stand on its own even without advertising itself as a pseudo-historical story. This volume alone was more than 500 pages, and apparently there’s at least four volumes, so I’m looking forward to more adventures starring RJ (not to be confused with the actual Robert Johnson).

Many thanks to Del Rey Manga for sending me a review copy of Me and the Devil Blues Volume 1!