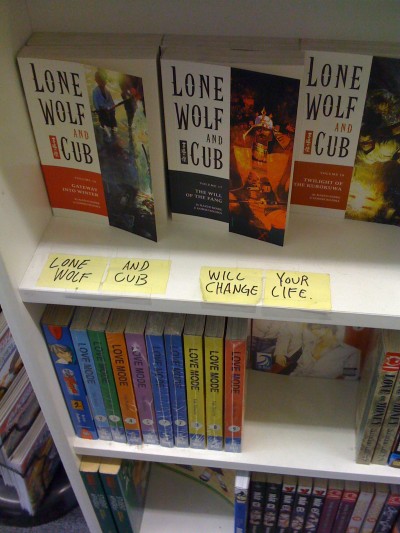 At least, that’s according to a local comic book (and other stuff) store. Found in the manga section. One good thing about these stores is that there aren’t random teenagers who sit in the aisle and read. At least, there weren’t any when I was there. Otherwise I would’ve had to step on some heads.

In other news, I acquired a Yotsuba&! volume 5 at that store. Since ADV is going under and all, I figured I should grab it before they become extinct/rare.

4 replies on “Lone Wolf and Cub Will Change Your Life!”

You saw those 100% truthful post-it notes for Lone Wolf and Cub and you didn’t buy it?

(I haven’t had the chance to pick it up because it’s never at the bookstores around here and I never remember to pick it up, but COME ON)

I didn’t know how my life would be changed. Maybe for the better, maybe for worse?

Probably for the better, it is Kazuo Koike after all.

I browsed through “Lone Wolf and Cub” at a local bookshop. I wasn’t too impressed with the art, so I set it back on the shelf and didn’t look back.