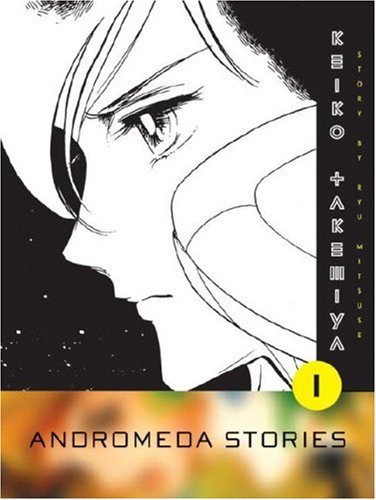 Long, long ago in a galaxy far, far away (though in this case it’s the closest galaxy to the Milky Way at least)…

Book Blurb:
Cosmoralia’s Prince Ithaca is about to wed Princess Lilia of Ayodoya and be crowned Astralta III. The apparently favorable celestial bearings mean he will be no mere monarch but holy king of a new “papacy”. Alas, the peaceful inhabitants of Planet Astria have no clue that they’re next in line for invasion by a ruthless machine force–a threat that seems to metaphorize the inherent perils of politics and desire in this multilayered saga. The tension slowly mounts to an unbearable pitch in this ominous first volume of three.

Review:
Andromeda Stories is the followup manga to Takemiya Keiko’s To Terra… The setup invokes memories of Star Wars. We’re reading about events that occurred 2.2 million years ago in the distant galaxy of Andromeda. The setting is a mix of traditional fantasy and high tech sci-fi. There’s dragons and robots, magic and guns. Unfortunately, this mix just comes off as seeming really, really cheesy.

The basic storyline is that some evil civilization has infiltrated the peaceful inhabitants of Cosmoralia. We slowly realize along with the inhabitants that their political figures are being manipulated by evil robot spiders from outer space! Cosmoralia’s only hope lies with an unnamed swordswoman who has fought the enemy before, and the newborn prince Jimsa, who happens to be just a toddler at the end of this volume. I’d say Cosmoralia’s F’ed!

To be honest, I couldn’t really get into this manga. Maybe it’s the whole dragons + robots thing messing with my mind. At the end of the volume (around 200 pages) I felt as though the story had only finished being introduced. But this is only a three volume story, so we’re 1/3 in and not much has really happened. While the idea of people with swords totally getting pwned by robots and lasers plays to the 12 year-old in me, I’m not sure how the whole thing will play out on paper. Luckily, I have the two remaining volumes, so I’ll just check those out and see for myself.

To sum it up, this first volume is very, very slow. The story seems a bit cliche (maybe it wasn’t when it was first published, but if so, it hasn’t aged all that well). At least the art is good. There’s no difficulty in interpreting the story from the art, if only the story was a bit more interesting… Hopefully things will pick up in Volume 2.

Many thanks to Vertical Inc for sending me a review copy of Andromeda Stories Volume 1!