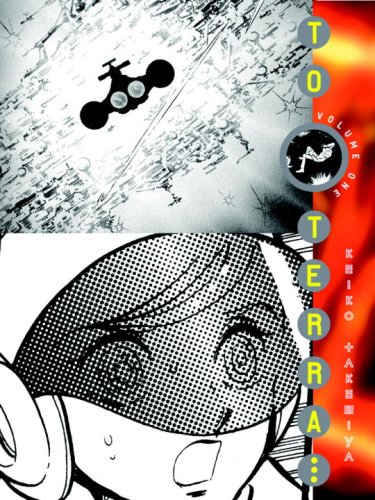 I finally got the Emo Manga, To Terra, that I’ve been meaning to get for the past few months or so. I even deliberately avoided watching the anime so I could have a pure emo experience! So was it worth it?

Story:
To Terra is a sci-fi manga that debuted in January of 1977. Following with Vertical Inc’s tradition of publishing classic manga like Buddha, To Terra could also be considered a classic, albeit a slightly more modern one.

After screwing up the Earth in the future (thanks a lot, humans!), an initiative called the “SD” was put into place. SD doesn’t stand for super deformed, but “Superior Domination.” Every facet of human life was put into strict protocol. In addition, humans were created from test tubes in order to create really hot babes! Or superior humans in general (but a side effect would be definitely be babes!).

Because of the crazy intense control over humans, a new race of human was created: the Mu. They’re basically mutants who have super psychic powers. More powerful than any man-made psychic computer.

To Terra tells the story of the new leader of the Mu, Jomy Marcus Shin, and his quest to lead his fellow Mu back… TO TERRA! Did you see how dramatic I made that last sentence? And how I incorporated the title of the series? Yeah, this manga does that a lot, too.

Analysis:
Vertical sure wasn’t kidding when they tagged this as an emo manga. The whole point of the manga seems to be that people are emotional creatures, and in suppressing the human need to express emotion, the Mu were created, rebelling against humanity.

While I was reading, I was reminded of a whole lot of other sci-fi stories, like The Matrix, Gattaca (you know, with Uma Thurman!?), Star Wars, and maybe a little bit of the X-Men. The reason I’m mentioning all these is because To Terra was totally written before any of these! It beat Star Wars by like, a few months.

As far as the story goes, while the story is very nice for the higher brain functions, I couldn’t help but think that I’ve been spoiled by fanservice. There was not one panty flash in the entire volume! Even Buddha had boobies! Well, not Buddha himself, but some of the ladies in the manga.

I also had some issues with the organization of the plot. The first half centers on how Jomy becomes the leader of the Mu. This part was actually really interesting and I enjoyed it a lot. The second half mostly dealt with the other side’s story, a human elite named Keith Anyan who is on his way to become one of the leaders of Terra. This part was a lot more boring. I think it lacked the background necessary to understand what the heck was going on. The last, short part featured Jomy again, and sorta linked the two parts together.

So yeah, the story was interesting and all, but it seemed a bit drawn out (no pun intended). I’m pretty sure everything could’ve been covered in about 70% of the pages without really losing anything. Except maybe a few emo moments.

Character Designs and Art:
Since To Terra is a manga from the 1970s, there’s a distinct look and feel to the art. The characters all have huge shoujo eyes, but the art’s a little too sci-fi to be shoujo. All the dudes look pretty effeminate, and there’s only one lead female character who’s blind, and totally not hot. I’m not a huge fan of the art, but I can appreciate it for what it is. The actual sci-fi parts are sorta cool; it’s the characters I don’t really dig.

The Actual Book:
The To Terra manga is about an inch or so bigger (in both dimensions) then the average trade paperback manga. It’s really amazing how much that extra helps when reading. My hands always start cramping up when I read a normal sized manga. This larger size totally rocks for prolonged reading.

The printing and paper quality is also really nice. It’s probably second only to Broccoli Books in my opinion. Also, in Vertical fasion, the book is ~340 pages, which is almost twice the size of an average manga volume.

Conclusion:
To Terra is definitely not a manga for everyone. I really like the sci-fi elements strewn throughout the plot, but the actual emo-ness of the characters and their designs are a bit hard to swallow. I liked the section with Jomy’s story, but Keith’s part was dull. I’m thinking there’ll be rivals of sorts, which should end up being interesting in the long run. Overall, a good introductory volume that should lead to a better story down the road. If you’re into emo sci-fi manga (with no romance or fanservice).