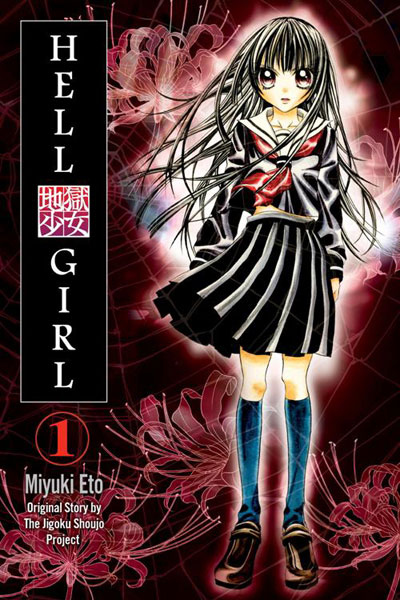 Story:
Apparently in Japan, people are real asses. They’re such asses that there exists a Hell Correspondence website where people can curse others who have done them wrong. But to curse someone is to dig two graves; once you have your revenge, you’ll end up going to hell yourself when you die. Bummer, dude. 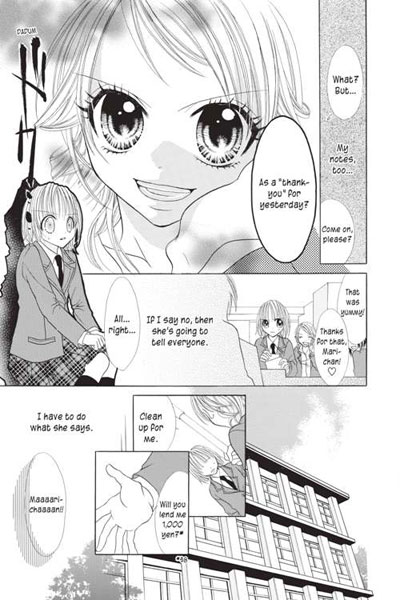 Analysis:
Hell Girl is like the Japanese Scooby Doo of anime/manga/live action etc. The general setup is that a character will be taken advantage of or bullied by someone. This can manifest in actual bullying, the stealing of cake recipes, sekuhara, etc. The victim feels powerless to seek revenge, but hears about the Hell Correspondence. After making a pact with Hell Girl, she and her buddies rough up and torture the bad guy/girl. The victim has been avenged and is happy, even though he/she is going to be eternally damned upon death.

So I have a problem with this on a few levels. First off, why not just murder the bad guy directly? I guess since we’re talking about a universe with a definite heaven and hell, the person would still end up going to hell for murder, maybe. But I’d imagine it’d be sweeter to get revenge firsthand.

Secondly, the perpetrator still sort of “gets away with it.” Since the person they’re tormenting goes to hell as well, if their original intent was to cause the target to suffer, they’ve definitely succeeded. For eternity. I guess it makes victory bittersweet when you’re just sorta stuck in hell for eternity, though.

I mean, can’t these people find their own way out? Calling Enma Ai is such a copout. Maybe I’m just thinking too logically here, but there must be some better way to seek revenge. I guess there wouldn’t really be a plot to speak of if everyone thought that way… 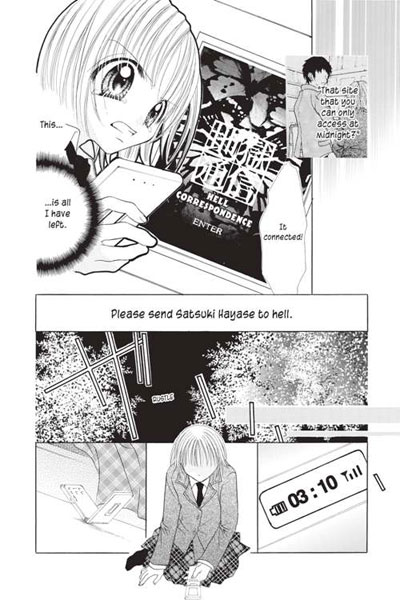 The parts where the bad guy gets his punishment are supposed to be delightfully horrific. But I thought they were a bit weak on paper. The evil veterinarian’s punishment was actually kind of funny. I think giant animals in lab coats just kind of evoke laughter from me.

Things also get really meta with the story about a girl who gets chosen to play Hell Girl in the Hell Girl live action drama! But then she gets attacked and becomes the Ex-Hell Girl. Then she has to get the real Hell Girl to seek revenge on the replacement Hell Girl! WHAT!?

The artwork for the manga itself is really nicely done. I like the occasional bold lines and SD transformations. Enma Ai looks really cute in the manga version. I always thought the anime version of her looked a little too plain. The manga version just seems cooler to me.

Moral issues aside, Hell Girl is entertaining for a little while. I definitely like the art, and the manga is a pretty fast read. I just think the stories get a little too predictable after the first one, and I can’t stop the nagging voice in my head that tells me that these characters are acting completely irrationally. One more thing: for a manga named “Hell Girl,” the titular character doesn’t get much face time at all. I guess they tried incorporating her into the various schools in the story, saying she was an exchange student. I think the manga could use an explanation chapter on who Enma Ai is, and why she does what she does. Maybe in Volume 2?

Many thanks to Del Rey Manga for sending me a review copy of Hell Girl Volume 1!

As opposed to the anime character designs, I actually don’t like the manga’s that much. Everyone else is fine, its just Enma Ai that’s the problem. In the anime her eyes are blank and her demeanor is cold. The design just gives you this sense of cool elegance. Compared to the glitery shoujo-y loli of the manga? Oh Haruhi, save me.

I agree with the previous comment, this kind of shoujo-ish character design is not suited for Hell Girl.
I think that it’s not that easy to take revenge by yourself. You should master the will to kill another human being. And you risk getting caught and spending the rest of your life in jail. Hell Correspondence is definitely a better solution.

I like the shoujo look. It’s sorta like, this super cute girl turns out to be the one to send you to hell! It’d be kind of obvious if she was, say, some girl with see-thru skin.

I’m not usually into manga, but this seems like a really interesting one to check out. Keep up the good work 🙂

And that shoujo-y look is the appeal of this manga, to second Hung. It kinda disorients your from the uncertainty that a ghoulish being will be the one to send you straight to Hell.

The point is,is dis hell correspondence thing true or just a make-believe? just curious. And if it’s real…so how could it be? Pls tell me if it’s true or not.

yeah I agree with the “dont like the shoujo-ish style”
I’ve seen the anime and the art was just brutal (in some parts…. in others they really let me down) and when I saw the manga I was like “WHAT THE HELL?!” I really didn’t like the shoujo style. not only in the characters but in the frame style too….
And I agree it get’s pretty predictable after a little

Watch the anime, especially the second season, in order to get the whole point of the series. It’s not always the “victim” that enacts vengeance, nor is it always a clear cut case of right and wrong. The second series goes more in depth wit the overall theme of vengeance, regardless of the reason being wrong. The way the series goes about it, rather than they typical idealistic happy girl whom is a defender of justice for the sake of all good, powered by the belief that “Friendship is the answer!!!!”.

Instead, Enma Ai is simply, to quote Boogiepop, “mechanical” in nature. She simply gives people their “vengeance” at the cost of going to hell at a later point themselves.

I never really got into this. I was more interested in reading Tsutoumu Takahashi’s “Skyhigh.”

This Volume was a grat volume that is way differnt and explains more than the anime does.

dis is quit interestin,,
but i want it more persice!

ive never read this but it looks interesting

I bought the first two volumes today, and read them in about an hour. I found it quite cute. Sometimes I have to agree and say that the plot was pretty predictable, but I was pretty happy that those meanies got what they deserved. (I get too emotionally involved in these. XD)

As for her character appearance, I felt it worked. It looked pretty cute, although she didn’t get as much time on the page as I thought she should have had. Its not about her, its about every other character. How about some character development people? But its cute, and I like it. Nice companion to the anime.

I think this type of anime is the best kind in the world. Once I saw it at the library, I instantly HAD TO buy it! Once I started reading, I couldnt stop. I’m already onto volume 4! I hope the creator keeps making Hell Girl books, they truly are amazing. 😉