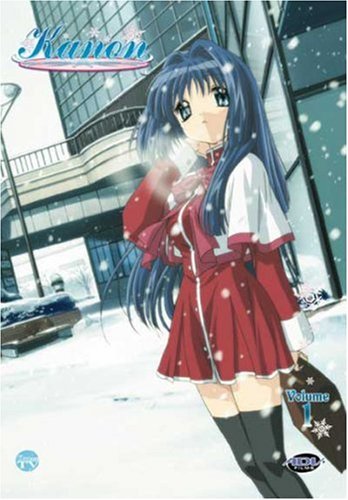 Are you serious!? xD

You gotta remember, back then anime wasn’t as fancy as it is now. It was poorly animated, and we liked it that way!

The old Kanon still had a good story, as does the new Kanon.

Great blog i just found it today! I also blog about anime 😀

Old Kanon also still holds a place in my heart as well.

But I’ve got to admit, it’s also very odd when the English dubs leave in those phrases like “uguu” or “gao” in Air. It just never sounds right like that.

I too was shocked when they decided to redo Kanon, but given the original was 13 episodes and the new one 24 episodes, they did actually cover a lot more story. I too also enjoyed the new Kanon a lot, though I’m not sure I can really pick out which one is better.

I don’t think there’s been one Key anime produced that I have not shed a tear for. The latest of course being Clannad.

when i first found out about kanon i searched it n found kanon 2006…then i saw 2002 version too….but after watching the first episodes of both kanons, i like to watch kanon 2006!!!…i dno y but i think its the quality of the anime that made me watch it…or it may be the cute girls in it xD but i did get tears while watching kanon T_T….so i think i like kanon 2006 better!!! i didnt watch the full kanon 2002 because i think it was telling the same story 🙂 and i like to picture kanon in my head as the 2006 version 🙂