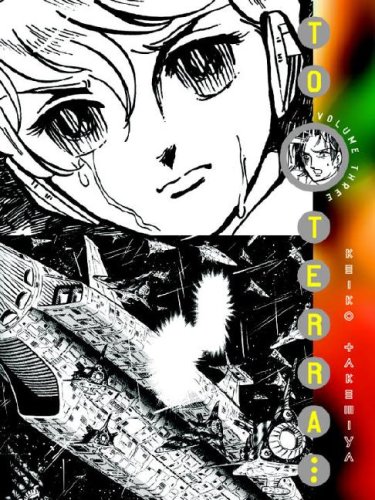 Everyone’s favorite emo manga, To Terra, ends in volume 3. Get your tissues out, this volume’s kinda sad…

Story:
Jomy and his merry band of mutants start their anti-Terra campaign by pwning Ataraxia. After that, they jump from planet to planet introducing the normal humans to their Mu bretheren. It turns out that after the Mu take remove the psychological hold of the computers over the humans, they start liking Mu, and even gain psychic powers of their own.

Taking a human planet is as easy as taking out the mind controlling robot, which also happens to have boobies. Seriously, those computers have cleavage and everything I just wish I had my scanner so I could demonstrate. I can understand cleavage-bearing computers controlling the minds of the male humans, but the females too? It gives a whole new meaning to the term “rack server.”

Anyway, things are going okay, and the humans finally agree to let Jomy “speak” with the mother computer who is controlling all of humanity. The computer, of course, wants to kill Jomy, and he wants to kill the computer. They have a fight, but unluckily for Jomy, Keith has it built into his DNA to obey Mother. Then Keith manages to blow up all of Terra. Nice one.

Analysis:
I think it was pretty obvious at the end of the last volume that To Terra would not end “well.” That is, there wouldn’t be an apparent happy ending where Jomy and Keith patch things up and the mother computer goes docile so Mu and humans can live in peace. And that wouldn’t be a “good” ending anyway.

What ends up happening makes sense, but I can’t help feeling a little unfulfilled. There’s a sort of feel-good epilogue at the end, but I’m pretty sure it doesn’t make everything better. I mean, pretty much all of humanity explodes at the end! But I suppose that’s what happens when you let computers take care of every little detail of your life. Cautionary tale noted.

It’s a very Japanese “good bad” ending, where immediately things go to hell, but in the future, things are okay again. Not that it really matters to the billions of people who died in the “bad” part, but hey, things are looking up!

Conclusion:
I did like the To Terra series, but this volume is probably my least favorite. I’m not a big fan of the ending, even if it does make poignant sense. To me, it’s not worth sacrificing all of the characters you’ve built up just to have that sort of ending. In addition, the ending just seemed a bit rushed, as if it was forced rather than occurring naturally.

Maybe it’s just a cultural thing, but these endings just make me emo. Oh wait, maybe that’s the point! Of course an emo manga‘s going to have an emo ending…

Many thanks to Vertical Inc. for sending me a review copy of To Terra Volume 3!