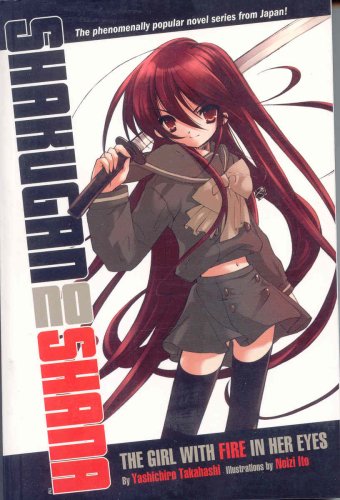 My Shakugan no Shanathon trilogy ends with my review of the Light Novel. Actually, I think it should’ve started with the novel, since it was the source material for the manga and the anime… Oh well.

Story:
Invaders from the Crimson Realm have come to Earth looking for something called the Power of Existence. Whoever possesses this profound power will control the very quintessence of reality. To the rescue comes an enigmatic young girl with fire in her eyes. She may be cute and petite, but she’s endowed with enough preternatural strength to save the entire universe. Plus, she’s got a really big sword!

Analysis:
Out of the all of the versions of Shakugan no Shana, the light novel contains the most story in the first volume. We get the complete arc involving Friagne and Marianne, his love doll. I noticed that a lot of the superfluous things that happen in the anime are left out, such as the appearance of the other Flame Haze, Margery Daw, or the stuff with the corpse collector. This was actually pretty nice since it kept the story concise and focused on the task at hand.

Like the manga, the disappearance of the real Yukari Hirai was left out (DiGiKerot was right). I still think that the anime version handled this better, where Yuji tried in vain to save Hirai but failed.

It may just be that I’ve been spoiled by the animation and manga versions, but the action scenes in the novel didn’t really do that much for me. It’s a lot easier for me to see stuff happen than for me to try and reconstruct Shana’s elaborate flipping and sword moves in my head. Maybe I have a bad imagination? The novel does better in describing the internal emotions and thoughts of the characters through dialogue and narration. I guess it’s a mixed bag, and you have to do all three to get the whole experience! Luckily I have all three…

The dialogue is especially useful when the book is trying to explain Shana’s tsundere-ness of not understanding her emotions of love, and getting all mad about it. Weird fact: I think Shana only said “urusai, urusai, urusai!” once in the novel. I guess it took a few novels for the catchphrase to actually catch on?

The Actual Book:
Not much to say here. There’s a few color illustrations in the beginning of the book to get the image of the characters in the reader’s head. These are a lot like the ones that were in the Boogiepop light novels. Then there are black and white illustrations here and there to keep things interesting.

Props for including the illustration of Yuji checking out his mom’s chest. For the torch, I mean!! But yeah, maybe I’ll check again, just to make sure… Nope, not a torch. Let me check again.

Conclusion:
If you’re into the whole Shakugan no Shana thing, the light novel is a nice read. It keeps the story a lot more concise than the anime, and it expresses the actual characters pretty nicely. The first part of Shakugan no Shana is by no means the most exciting part, but hopefully Viz will continue to translate the novels to the parts where the story gets rolling.

Many thanks to Viz Media for sending me a review copy of Shakugan no Shana: The Girl With Fire In Her Eyes – Volume 1!

4 replies on “Shakugan no Shana: The Girl With Fire In Her Eyes Vol. 1 – Light Novel Review”

I wish I could find that in any bookstores here D: