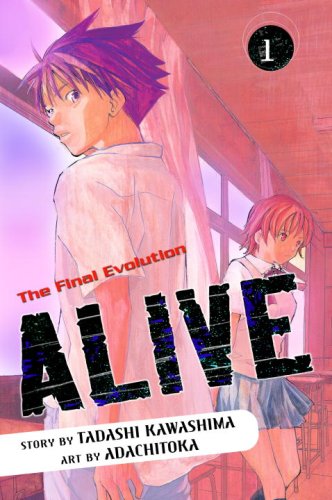 With a generic subtitle like “The Final Evolution” you’d expect Alive to be pretty substandard, right? Well, you shouldn’t always judge a book by its unoriginal subtitle. The cover is much better for superficial judging!

Story:
Alive tells the story of four main characters. Taisuke and his sister have been scraping by since both their parents died when they were young. Taisuke’s sister is the nurse at the high school that he attends. Hirose is Taisuke’s childhood friend who always gets bullied, then saved by Taisuke. Megu is Taisuke’s girlfriend, I think…

When mysterious mass suicides occur all over the world, no one can really figure out why they’re happening. Eventually a theory is hatched that a virus is causing people to kill themselves. But after a week the suicides stop.

Hirose is caught in the middle of this “nightmare week” when he’s found with the corpses (or what’s left) of the kids who were bullying him on the roof. Ummm. I blame suicide virus! Unfortunately the cops don’t see it that way…

This might be good if it wasn’t his sister…

Analysis:
There’s a feeling that I get from reading Alive. It’s sorta creepy. Like the world that the story is happening in is just slightly askew. I’m not sure if the mangaka intended the story to be that way, but it’s really effective. There’s this underlying tension behind all of the events that take place. Something just doesn’t sit right. If this was a harem comedy manga, that’d be a bad thing, but since this is something of a horror story, I approve.

The end of the volume leaves things very open ended. Almost too much. You’re left with all the questions in your head unanswered, and it’s really annoying. What kind of powers do Hiro and Taisuke have? How does it relate to the murders? What is that creepy guy doing in the yaranaika outfit?!

Character Designs and Art:
I lol’ed at the creepy guy in the kuso miso technique jumpsuit (see below). Besides that guy, all the character designs are done pretty well. They all “look” like the characters they’re supposed to be, if that makes sense. Like Megu looks like a sort of girlfriend but not. And Hiro looks like the kid that gets bullied and suddenly kills like 500 people and doesn’t think twice about it!

Like I mentioned earlier, the art does a good job of conveying this odd sense that something is not quite right in the world.

The Actual Book:
Besides the story, the book contains Del Rey’s famous awesome translation notes, and a “light visual manga” section, otherwise known to normal people as 4koma. The 4koma are so strange, because they try to use this creepy universe as an engine for humor. It just ends up creeping me out even more.

Conclusion:
I don’t think I’ve really ever read a manga like Alive before. Most of the stuff I read is either funny or romantic. And maybe some action. Reading horror manga is a pretty nice change. And it also helps that the manga comes off as really creepy. I’ll even forgive the sappy subtitle, just this once.

I’d suggest this if, like me, you’ve been sort of bombarded by harem comedies and high school romance and are looking for something different.

Many thanks to Del Rey Manga for sending me a review copy of Alive Volume 1!

Escuse me the language but, this is one of the biggest pieces of crap I’ve ever seen (and i’ve seen alot). I admit i’m a Horror/Gore lover…. I love horror mangas…. but the ones that don’t put the own characters to shame. This one is so stupid, plays such comedy with the characters that isn’t even a Horror manga (I truly don’t know why they rated Alive as a Horror manga…). This is complete shounen!! It’s a shame to the horror mangas. If the author wanted to show the manga as a shonen manga, then congratulations. If the author wanted this to be a horror manga…. I say quit the business…. REAL horror mangas are Gantz (currently my favourite) and Battle Royale.

Gantz? Are you kidding me? Gantz is like a PG-13 version of Yu-Yu Hakusho. If thatâ€™s what you consider horror manga, then I can only assume your no older than 10.
Alive is a good series. I donâ€™t consider it hard core horror, but it does have a rather eerie element to it. The situation is somewhat believable in an unbelievable sense. Basically meaning that it sets you in a place that you can relate to. In modern times, with school kids being school kids. Then all of a sudden something happens, and you get to watch real people dealing with an ‘unreal’ situation. I find that rather freaky.
Itâ€™s sort of like (if you will) X-Men meets Cloverfield. You have a life situation, and an unrealistic event (Cloverfield) and then people with abilities that have been given to them through this virus, which is like being a mutant I suppose (x-men). Normally, I never read things like this. I am strictly a Shojo fan though I dabble in everything and what I read varies greatly, I still mainly stick to Shojo. I bought Alive because I was bored, and didnâ€™t read it till about 4 months after I bought it. Next day I bought volume 2 and 3…’nuff said.

I lolled at ‘REAL horror mangas are Gantz’

‘I bought Alive because I was bored, and didnâ€™t read it till about 4 months after I bought it. Next day I bought volume 2 and 3â€¦â€™nuff said.’

wow this manga is great do you know where is it the other mangas?? kuz i only get to the #8 so i want the all of them

Ah, the English version of this is out!? I’ve read almost the entire series from scanlation groups, but I never knew it was already officially translated. I gotta go get one.

As for Pexe, dunno ’bout Gantz, but read Deadman Wonderland. That’s pretty nice. Alive does eventually slip somewhat into a more battle manga feel, but it doesn’t feel unnatural. It just kinda… happens. Personally, I liked both the horror and the shounen aspects of this manga, so it was absolutely fantastic for me, but I don’t know about people who are just looking for horror; it might leave a bad taste in your mouth.

And yea… I saw the manga once, then skipped over it, and then ended up coming back for more a couple months later… maybe that’s just the way this manga is. >__>