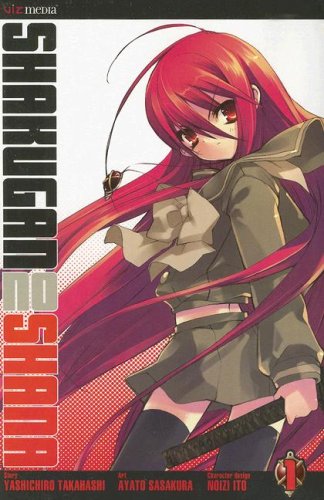 Story:
How many times do I need to write out the story for Shakugan no Shana? Okay, here’s the manga back-of-book blurb:

Yuji Sakai is beginning what he thinks will be another boring year of school. But everything changes when the world around him stops, the surrounding people are engulfed in blue flames and a freakish doll-like creature begins sucking them up! Before Yuji suffers the same fate, a young redheaded girl with a sword appears and saves him. Yuji is drawn into the struggle between these creatures from another world: the Crimson Denizens and the girl Shana, called Flame Haze. He too has a crucial role to play in the conflict, despite the fact that…he’s dead!

Analysis:
Shakugan no Shana: The Manga, takes a slightly different approach to telling the story than the anime. I haven’t read the novel yet, so I’m not sure which one is more true to the story. At this point, I’m liking the anime version more since they seemed to leave out a lot for the manga. Like in the anime Yuji had to deal with the slow disappearance of the torch version of Hirai. I thought it illustrated the significance of being a torch really well. In the manga, they just skip that and show Shana becoming Hirai without ever showing the “real” Hirai.

Besides that, the manga seems to follow fairly closely. The art style is totally different, though. More on that in the next section. Which will be coming up… now.

Character Designs and Art:
They obviously commissioned an artist other than the original character designer to draw this manga series. Instead of the more serious looking style found in the novel and anime, you get a chibifest. Think of Shakugan no Shana-tan, then imagine the whole manga being drawn like that. Almost. In a way I feel like it detracts from the seriousness of the plot. On the other hand, it’s way cute and I like the chibi!

The Actual Book:
The print quality is good. But I noticed that the inside margins are so close to the book’s fold that some text is super hard to read. I had to almost tear the book apart to read what they were saying in some parts!

Conclusion:
For some reason, the Shakugan no Shana manga feels to me like a quick attempt to cash in on Shana. The book just doesn’t seem to belong. I think it has to do with the art and the changing of the plot. Perhaps it’s really closer to the novel though? I have the novel here, so once I finish it, that should complete the Shanathon trilogy.

Many thanks to Viz Media for sending me a review copy of Shakugan no Shana Volume 1 (Manga)!

The manga is actually more authentic than the anime version – the Hirai stuff was pretty much non-existent in the novel. To be honest, I preferred it that way, as the opening episodes of the anime repeated themselves to the point of heavy-handed tedium. Actually, the anime version isn’t really all that faithful at all.

Mileage, of course, will vary.

Well, leave it to DiGiKerot to correct me. I liked the Hirai stuff, personally. I thought it made the whole torch thing easier to understand.

^^ shakugan no shana used to be my fav anime! im thinking about rewatching it

i have a question.. when comes shakugan no shana chapter 13 … i want to read what happend next

I personally dislike the Manga adaptation. Artwork in it is average quality, doesn’t really tell the story that well, and just doesn’t have the overall feel of Shana. The Manga pretty much seems like the kind of work I’d expect from an average fan-comic author.

shakugan no shana kills many emotions,
from the bottom of my heart!
it really tells how LOVE can overcome STRRUGLES in life.

i really really love the art work.
it appears as a professional hand work of an artist!
for that I’ll give a big hand of applause!

iloveit shakugan no shana is the best animae

khacie : yeah me too! but I think its not the best… sorry~