It’s about that time again for some anime season previews! I’m doing these in small chunks, since I’m going to be out of town, and this is awesome post fodder!

Tetsuko no Tabi is apparently some kind of non-fiction anime based on a manga writer who accompanied his boss and a crazy Densha Otaku. So the plot is just them riding in trains and maybe the otaku wigging out about the train.

I’m pretty sure no one will sub this (it’s way too culture specific) but if someone does, it’d be pretty funny just to check out. 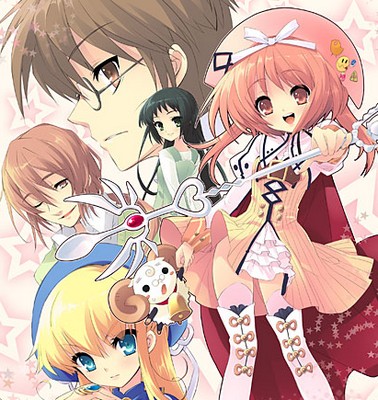 Nanatsuiro Drops is that one anime I and Hinano mispronounced in the podcast, then someone went crazy over it and bragged about totally completing 100% of the game it’s based on.

It has something to do with a guy who turns into a stuffed sheep toy and tries to find star droplets that’ll turn him back. Okayyyy… At least the character designs look interesting. 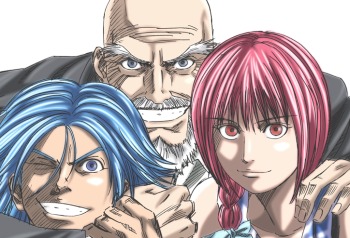 I’m assuming this anime is about basketball because of the name, and the rotating basketball during the extremely long flash loading intro animation. Besides that I can’t really say much about this. There’s an old guy grappling two kids?

I don’t really like sports anime, well, Suzuka was pretty good. In a bad way. I think it stems back to middle school, when I was routinely chosen next to last for basketball. I usually beat out the retarded kid…

And that’s it for today! Come back tomorrow for more Summer 2007 anime previews!

They’re by Noizi Itoh, who did the illustrations for the Haruhi and Shana books. But you probably knew that already.

I predict Buzzer Beater will suck because the recent original was terrible, and the source material is not that great. But I will still watch it anyway, because I will watch any anime with basketball in it.

“I usually beat out the retarded kidâ€¦”

Tetsuko no Tabi looks definitely interesting at least from that little information. The monsters, lolis and other over-the-stop stuff get a bit tiresome now and then, so I’d appreciate something more down to earth.

Kabitzin, don’t you mean you watch anything with big balls?

That too. And Nanatsuiro Drops looks great.

I’ll be watching everything except nanatsuiro drops… talk about a bad idea… It would be like watching sailor moon. I don’t know why, but some people like sailor moon… I slap everyone who even mentions sailor moon *slap*