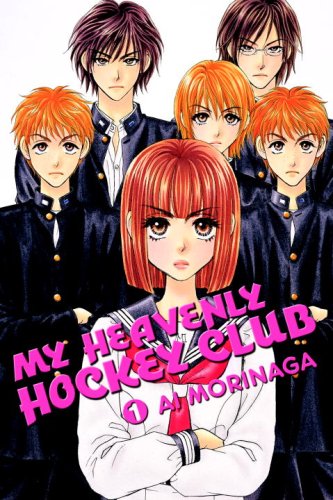 My Heavenly Hockey Club is like one part Ouran High School Host Club, and one part Mighty Ducks. Except in this version of the Mighty Ducks, the team sucks hard and never gets better (or even has a game)…

Book Blurb:
Hana Suzuki loves only two things in life: eating and sleeping. So when handsome classmate Izumi Oda asks Hanaâ€“his major crushâ€“to join the school hockey club, persuading her proves to be a difficult task. True, the Grand Hockey Club is full of boysâ€“and all the boys are super-cuteâ€“but given a choice, Hana prefers a sizzling steak to a hot date.

Then Izumi mentions the field trips to fancy resorts. Now Hana canâ€™t wait for the first away game, with its promise of delicious food and luxurious linens. Of course thereâ€™s also the getting up early, working hard, and playing well with others. How will Hana survive?

Analysis:
Like I mentioned before, this manga is really like Ouran High School Host Club with a sports twist. Hana is Haruhi, Izumi is Tamaki, the Ayuhara brothers are the Hitachiin brothers, Natsuki is umm… Honey, and Itoigawa is Kyoya. All we’re missing is Mori-senpai (and Renge!!!). Even the plotlines are similar: Hana has to join the club (and pretend to be a boy) because she damaged Izumi’s car that was uninsured…

Who knows if this is a blatant ripoff or an homage or a coincidence. In the end, I don’t think it really matters anyway, and the manga still ends up succeeding on its own merits.

My Heavenly Hockey Club is definitely a character driven manga. Hana is a lot like Nodame in that she’s totally weird and makes weird noises occasionally. That’s a plus in my book. The other characters are also somewhat strange, though their personalities really haven’t had much time to develop yet. For now, Hana’s antics in trying to get more sleep are amusing enough to keep me reading.

The general mood of the manga is somewhat surreal. It’s almost as if the story is taking place in an alternate universe. A universe where high school kids can afford helicopter transportation, and bears fall in love with girls and agree to play the goalie position in a game of field hockey. It’s definitely strange, but I like it!

Character Designs and Art:
The manga has some really ugly cover art. Luckily, the art inside is better. Like I mentioned before, the characters all seem like bizarro versions of Ouran High School Host Club characters. Ah, well. I still like them just the same.

Being a reverse harem, the art tends to lean towards bishie style. There’s a lot of chibi used as well. Luckily, Hana makes quite a number of costume changes over the first volume. While being plain, Hana is still kinda cute, plus she has weird quirks, which is hot.

The Actual Book:
One thing I noticed about the translation of this manga was that sound effects were sounded out or translated, but not both. The choice to do either seemed random. Like the sound “Doki” which is the sound of a heartbeat was just translated as “Doki.” But I think most readers are not going to know what Doki actually means, as it doesn’t really sound like a heartbeat to American readers.

Same thing with “Pachi” for clap. Yet in some places the sounds were translated to English, like “Baku” being “munch.” There was also one instance where the sound effects and their translations were switched. I only caught that because I can read Japanese, though.

Perhaps Del Rey should just include a list of sound effects, much like the list of honorifics that they include in all of their books. I think it’d be helpful to establish some kind of standard, as well as help people who are trying to learn the complicated array of Japanese sound effects.

At the end of the manga, there’s translation notes much like the ones I’ve seen in other Del Rey manga like Nodame Cantabile and School Rumble. They were useful, but I think they could have been expanded even more. There were a few times that I looked in the back to see if there was a note for something I didn’t understand, and there wasn’t.

Conclusion:
It’s not often that I go into reading a manga with no expectations. In this case, I was really pleasantly surprised. Despite the similarity in plot to a certain other manga, My Heavenly Hockey Club is good on its own merits. The story is strange and wacky, but most importantly, fun. I’m looking forward to reading more about the adventures of the Hockey Club, minus the bear, of course.

Many thanks to Del Rey Manga for sending me a review copy of My Heavenly Hockey Club Volume 1!

that looks funny, and i really liked ouran high school host club so i think i’ll give this one a try.

Yeah, it’s like a weirder version of Ouran with less romance and more random crap. Which ends up being pretty good.

This is a great manga! I just picked it up today (very randomly). The thing that appealed to me was the hockey aspect (Im a hockey player too, ice hockey though. Anyways it is so funny. I was reading it outside today and I’m pretty sure my neighbours thought I was crazy! I will probably read it again tomorrow. The sad thing is that the next volume won’t be coming out until August 28th. We will have to wait three months ;_;

I love this manga. The art is pretty good and funny too…

I always laughing when read it,
but I think the girl character on that’s story tomboy and doesn’t interest with love…just need sleep and eat well.

how can this be a ripoff if it was published before ouran?

I just love this manga!

It has some similarities to Ouran, but when I read it I dont think “That’s just like Ouran!”
It’s so wacky that it seems too different from Ouran.

Anyway, its another manga I would recommend too! ^_^

I borrowed volume 1 from a friend, and instantly fell in love with it. The characters are great, Hana is funny and the boys are all awesome. I know it bears a lot of similarities to Ouran (I read that manga as well ^_^) but the stories are good in their own way. Izumi is fit, so it Natsuki and Takashi (though it has to be said Takashi is my fave guy in this manga… heehee) and I love the twins. I can’t wait to read volume 2!!!