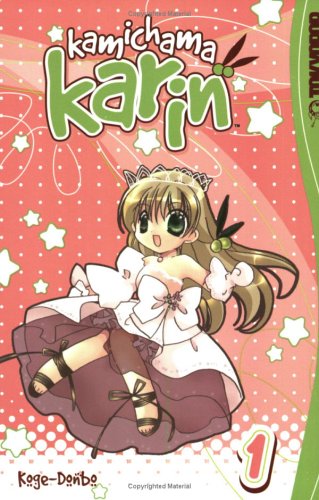 Since the Kamichama Karin anime is in full swing over in Japan, I figured I’d check out the manga version. Because the book is always better than the movie, right? Especially when the production values drop.

Story:
So Karin’s life has has been pretty rough. First off, her parents are dead, and she lives with her super mean Aunt. Next, her pet cat (who doesn’t even resemble an organism) is dead. The cat’s name is shi, what do you expect!?

Her life is changed when she discovers that her dead mother’s ring allows her to transform into a goddess. Or at least, borrow the powers of one. Of course, being wacky, Karin thinks of this as some kind of super sentai magical girl transformation. Well, it is, in a way. Karin has just begun to slowly understand what it really means to be “divine.”

Analysis:
So this manga goes totally slow. At the end of the volume, we still don’t really know what the heck Karin’s mission is, besides fighting evil and being an ally of justice (my words). I guess this first volume just serves to set the plot up. Like the three “good guys” are in middle school, but there’s two “bad guys” too. And one is the class president! And one turns into a girl? Either that or he/she is a reverse trap…

I thought the pace was a little boring. Not enough cute, and a little too much emo from Karin. Koge Donbo wrote that this is her first time doing a shoujo manga. I thought Pita Ten was shoujo! Anyway, you can tell this one is, because of the number of bishounen shots: a lot!

Character Designs and Art:
So in typical Koge Donbo fashion, these character designs are chibi and cute. The boy, Kazune, totally reminds me of Ten-chan from Pita Ten, though. And Himeka reminds me of Shia. Shia = <3, by the way. I hereby proclaim that Koge Donbo is the master of huge sparkly eyes. Seriously, the eyes! They sparkle! The art ranges from crazy bishounen detail to uber super deformed. It's kind of distracting, actually. I think the manga would be better if the SD was turned down to maybe, 10, but that's just me. Also, the cover art is way too freakin’ cute. Look at it and tell me you don’t want to buy this immediately!

The Actual Book
This book is printed really nicely. It looks like they added a bunch of “full color” inserts that look strange when converted to black and white, though. And there’s these weird sections that have been censored (?) with cute images saying “I wonder what used to be here?” Japanese Imperialistic propaganda? The world may never know.

Oh, and also, a lot of the Japanese sound effects are left untranslated. I think all of them except for “doki doki” and “shiiiiin” which I both know already. It would’ve been nice to see a bit more effort in this regard.

Conclusion:
I really like Koge Donbo, but this first volume of Kamichama Karin felt a bit slow and boring. It should probably pick up, though. The shoujo bits are kind of annoying too (like how Karin keeps on mentioning how hawt Kazune is), but whatever. People seem to like this, so I’ll continue on.

Many thanks to Tokyopop for sending me a review copy of Kamichama Karin Volume 1!

The manga is superior to the anime XD
Unfortunately I have to disagree that the Japanese cover is much prettier.

So what does the Japanese cover look like? You can’t just say it’s prettier and not link!

I’m gonna have to disagree with you on this one, Hinano. American cover rocks!

I am going to have to disagree with you hung – the japanese covers are better. They come with plastic overcover too!

“Look at it and tell me you donâ€™t want to buy this immediately!”

Hmmm, I guess some people just aren’t as weak as I am against chibi floating characters. It sorta reminds me of the first few seconds of the Azumanga OP, if that makes any sense.

Yeah, after looking at the cover for a little while, you’re right, it does seem reminiscent of that.. (0.0)

Lol, i agree that the cover of kck is adorably adorable!!! That was the main reason why i bought the manga. xD

If you thought Pita-Ten was shoujo, you -really- need to look up what shoujo really means… >.>;;

To my knowledge, Kamichama Karin (and its sequel) remains Koge-Donbo’s only shoujo work to date. The start of the series is somewhat weak as a result of the entire series initially being planned as a two-chapter short, then being extended due to popularity. The anime seems to try to fix this by merging chapters here and there, though that opening sequence straight from the sequel series… >.>;;

The link for the cover is dead!

Oh, btw, where did u manage to find kamichama karin anime? (besides Youtube) Is it on DVD yet?

I LOVE Koge Donbo’s mangas and art, so I like checking out reviews for them. The reason you might’ve found the first volume slow was because the whole first half of the book wasn’t created originally to become a full manga, it was a short story. Plus, Koge Donbo always likes keeping us in the dark. The ‘real reason’ and explanation for everything won’t come in this series because she’s releasing a ‘sequel’ which is the one where supposedly, ‘everything will be explained!’

Oh yeah, whenever you see koge donbo’s inserts like that (which also appears in a lot of other mangas actually) it is where there can be an AD if the manga was to be serialized in a magazine like Sugar, or in Kamichama Karin’s case, Yatta!

If you’re a fan of Kazune or Himeka, check out Koge Donbo’s Kon Kon Kokon! where they appear often!

‘Shojo’ is usually defined as having a girl as the main character, and first person narrative. In Pita Ten, the main character was in fact, Kotarou not Misha and Shia. Also, we saw things from his point of view mostly.

The anime for this came out this year (2007) and it looks really really nice! (much better than what they did with Pita Ten…)

I agree with you, Koge Donbo rocks! Hope we all can see more stuff coming. >.

I really like the anime. I think it rocks! ^^
I read some of the manga and I think it is quite nice too.

It always baffles me when people wangst about sound effects being left untranslated. If you can read kana, you can tell what the effects say and, more importantly, know what they mean based on context. Besides, kana are -really- easy to learn. Just download a freakin’ kana chart.

the “what used to be here” are mostly ad or charater info (if i’m right) most i seen are on manga scans nothing really inmortant.

OMG!!! The Japense one is cool looking. But the American one looks better!!!

Oh and just so you know the guy Karin likes is a girl.. ( But in the anime I think she still likes KArin I mean Like Like. But I’m not sure I forget.)

@Naruto Uzamki: You’re a moron. There are such things as romantic shounen stories. The only reliable definition there is for what is shoujo and what is shounen (and kodomo, seinen, and josei…) is by knowing what magazine a comic was serialized in. Pita-Ten was serialized in Dengeki Comic GAO!, a shounen magazine. Try as you might, there’s really no way to pigeonhole Japanese comics by content without pissing someone off, so you might as well go with the magazine-that-published-it method. The different genres really say very little about comics’ themes.

Naruto Uzumaki is a total idiot. You’re implaying that just because a manga is romance, it is considered shojo? There are alot of shounen, seinen, and other types of manga that are romance. They may not be FULL of romance, but there is. ANyways, i think that the japanese version would be better, and i hope kamichama karin doesnt come out dubbed. It would suck because they would choose bad voices. Like what they did to Digi Charat.