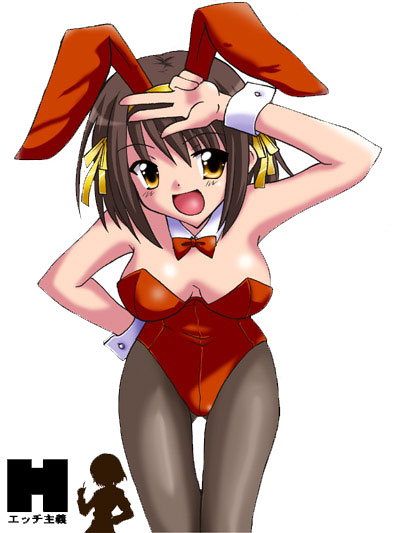 Over 400 votes were counted in our most popular poll yet! The discussion was heated, and anime fans across the nation had their voices heard! It was an intense battle between everyone’s favorite tsunderekko and the up and coming crossdresser! So who takes home the victory? Whose cuisine reigns supreme!?

Suzumiya Haruhi. But by a very small margin. Suzumiya netted 55% while Fujioka got 45%. I was really expecting Fujioka to be wrecked, but she proved her resiliency once again. As Tamaki would say, “good, good, very good!”

I was also surprised at how many people dislike Suzumiya as a character. I guess bossing people around makes for an entertaining anime, but not a cool chick.

Now that the battle is over, I think andrael is right; Fujioka and Suzumiya should be anime best friends forever! Just think of the damage they could do with Suzumiya’s god powers and Fujioka’s level-headedness… If only Suzumiya willed it, we could have a “The Melancholy of Ouran Host Club” anime!!!

Up next: What’s the best OP of the Spring 2006 anime season? I didn’t put all of them in the poll, because it would kill my sidebar. If you haven’t heard them yet, you can find most of them in the MP3 section.

NOOOOO. DAMN IT, NO. Fine. If she cant win here, she has to win at our place.

Yeah, OS, I feel your pain. I was tempted to do a poll answer switch, but the voice of the people must be heard. And plus I bet someone would’ve called me on it…

Can you imagine what horror Suzumiya would wreck on the Host Club?

Would be pretty darn entertaining though. 😀

There will only be one Haruhi and she doesn’t wear bunny girl suits.

Damn! I was sure Haruhi would win! Guess I was wrong as Haruhi won.

*sniff* Fujioka will continue to be my hero..ine.

I was also thinking of setting up an electoral voting system where some parts of the anime blogosphere (namely Basugasubakuhatsu and Kono Sono) get more votes than other areas. I’ll figure out a way to rig the vote next time. Don’t you guys worry!

Well, at least Haruhi F. made significant inroads into the S. It is almost time for the armies of Ouran to march into the dark Melancholy hordes, and curb their dominion over the land of anime.

I really don’t see what’s so special about Suzumiya.

Actually there’s nothing special about F Haruhi either. But that Suzu onna is just irritating.

Suzumiya Haruhi is so overrated, both the anime and the character. But I expected the result to be heavily in her favour so there is hope for humanity.
How about a poll “Tamaki vs random popular character from this season”? I am probably going to try to find a way to cheat if Tamaki starts to lose. 🙂

Haruhi won!
Never doubt the power of the S.O.S Dan!

The Genki Girl won over the Bifauxnen hay? I can see why some people are so bitter (girls mostly?).

Tamaki will no chance vs Ginko, but he is in a underrated show (and he is no Bishonen). I love to see who would win in a Bishonen poll.

I find the Haruhi vs Haruhi thing overrated, I find the fanboying over Melancholy a bit too much, but I also find the fangirling (or fanboying) of Ouran to put me off a bit as well.

The Haruhi x Haruhi Crossover? it may be better than the CLAMP Crossovers I’ve seen so far.

Suzumiya and Fujioka crossover will result in an emotionally scarred F. Haruhi that is involuntarily abducted to the SOS. If S. Haruhi was the one that broke the vase in the Ouran club, she would have mitigated all liability onto the club by blackmail and/or other means and choke the boys where it hurts… if F.Haruhi was to run the SOS she won’t last… and a ‘state visit’ to the Ouran club by S. Haruhi is anything but shoujo material.

S.Haruhi polarizes people with her utter ruthlessness, crude comments from time to time that stings while F.Haruhi makes some feel rather plain and ‘uninteresting’. I dread the day that Haruhi^2 crossover occurs.

Fujioka would go on relativeyl well with Kyon, as both would understand the utter amdness around them. Haruhi and Renge will blow things outof poportion,a dn bothwill fondle BOTH Honey and Mikuru… though Mori and Honey will protect Mikuru with their judo. Unless Haruhi has some uber-cool amrtial arts we didn’t know about (which she is bound to)

Ultimately, Yuki will fix all corssover problems by uttering a few five dimensional words and resetting everything. As she always does.

Enough of the Suzumiya flaming ! S. Haruhi rocks, and you know it. Sure, she’s selfish, angry and a little bit bitchy, but her eccentricity and hyperactivity wins her over. Not to mention that she does change for the better over time, unlike some two dimensional characters (*cough* Daioh’s Tomoe *cough*) SHe’s like a mix of Kaolla Su and NieA, but made into the perfect girl. No, seriously.

I wonder what would have transpired had the poll waited for the inclusion of Haruhi Kamisaka (a witch in training) from Happiness.

I like both of them, can’t vote on either

Well, in fact, if I remember well, there was a episode in host club called “The melancholy of Haruhi Fujioka” or something like that…

Suzumiya is SO OVERRATED! I watched the entire series, and all I saw was typical anime, the only episodes I remember liking where the ones that focused on Yuki and the Mikuru movie (funny). Kyon was annoying, too (all he did was complain).

I like how Fujioka is intelligent, mature, and not annoying (a departure from most anime heroines). She has more redeeming qualities than Suzumiya (my opinion). Too often do I see anime fans dismiss the bold heroines and gawk over the loud ones just for the fact that they’re eccentric and hyper. Just b/c someone is different doesn’t mean that they’re someone you’d want to hang out with in real life. I know someone in my school who’s VERY eccentric (she likes to count hairs on other people’s arms) but at the same time she’s bratty and spastic.

Suzumiya is NOT the WORST anime character ever created, but she isn’t great either. She’s quirky and I like different anime characters, but when they’re annoying…

Anyway, FUJIOKA ALL THE WAY!

Noo I wanted the other Haruhi to win!!! Ouran is the best anime ever.

Yes! Go Suzumiya! I love her, she’s so awesome! Sure, she’s a bitch, but that just makes her even better. At least she’s not like Mikuru. (shudder) I hate Mikuru so bloody much. Yuki is cool, Haruhi is awesome.

I think they should do a poll asking which male lead fans like more: Kyon or Tamaki. I think I know who would win, but it would be interesting to see what sort of comments people would have about it.