Back when I did my first preview of REC, all I really knew about it was that it involved a seiyuu. A hot seiyuu! Even with that small amount of info, I had a feeling it would be a pretty good anime. Okay, so maybe I just thought the picture was hot… So how does the first episode hold up?

REC follows the relationship between the pathetic salaryman Matsumaru and a cute aspiring voice actress, Aka. They meet when Matsumaru is about to throw away a pair of movie tickets after being stood up. Instead, Aka convinces him to watch the movie with her. She keeps reading the subtitles outloud and saying she wants to be Audrey Hepburn. Weird.

After the movie, Aka takes Matsumaru out to console him (his treat). They part ways, but for reasons yet unknown, Aka’s house burns down and Matsumaru offers to help (take advantage of) her out by letting her stay at his place. This is the part where I refuse to suspend my disbelief. Am I really supposed to believe that a girl would stay at a dirty unfamiliar salaryman’s house the same day she meets him? And have sex with him!? I guess Japanese girls are easy following their house being burned down…

The character designs for this anime are interesting. Aka is really cute. The amazing part is that she accomplishes this feat without being uber chibi or deformed. I will say, however, that Aka seems a bit less… endowed in the anime versus the original picture. I think this calls for an obligatory bust comparison: 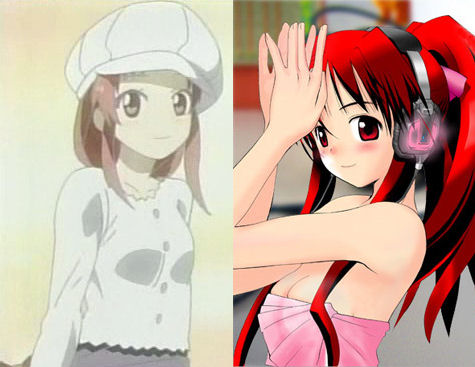 I can’t really say that I like Matsumaru. He kinda seems like a scumbag. First he’s kind of a jerk to Aku, and then he takes advantage of her while she’s still emotional from her house being burned down. Seriously, is this a good way to start off? I guess we’re supposed to feel sorry for him, but his conduct is totally uncool.

The OP is sung by the seiyuu for Aka, who does a pretty good job. Though the melody is kind of unorthodox, the song is still catchy and cute. I like it. There’s an ED listed on ANN, but I didn’t see it on the raw or the sub that I watched.

Listen to the OP: Cheer~Makka na kimochi~ by Kanako Sakai

Overall, I’m kind of split with this anime. On one hand, Aka is really cute and adorable, so I want to keep watching and see what happens. On the other hand, Matsumaru is such a jerk that I don’t want to see Aku end up with him. REC is only 9 episodes long at 12 minutes each, so I guess there’s really no reason for me to stop watching. Hopefully Matsumaru will redeem himself.

“Am I really supposed to believe that a girl would stay at a dirty unfamiliar salaryman’s house the same day she meets him? And have sex with him!? I guess Japanese girls are easy following their house being burned down…”

I guess you take animes too seriously 🙂

Actually, I liked Matsumaru; he is the kind of I guy I would pick to watch a movie with too. There was some mutual attraction between them, I figure (since she didn’t resist,) so he wasn’t exactly taking advantage of her.

Yeah, I don’t see the “taking advantage of” thing either. It’s more a fact that she was in shock. After seeing the destruction of her house, and realizing how closely she came to death, she wanted to have sex, which is a life-affirming action. It’s fairly common.

And I don’t see why Matsamura is a creepy or scummy. The guy got stodd up, and then was kind enough to put up with a girl who was being a bit unorthodox, even taking her out to dinner. (Which shows some mutual attraction, I think. You don’t go through with an entire first date without some amount of attraction.) Then he had the common decency to allow someone who is basically a stranger to stay with him, after her house burned down. Not a lot of people would do that. Not to mention he offered her his umbrella. I don’t think the sex was planned, I think it just happened. Sometimes, you know, these things do.

Sure the guy is a bit sarcastic about life and love, but he’s a 26-year old salaryman. As a 25-year-old in a dead-end job, I can relate.

In the end, I really appreciated the lack of self-conscious Japanese humor. No “you perverted salaryman, I can’t stay with you!” Nothing weird about the sex. If you have nowhere to stay and it’s raining, you’ll stay where you can. (Having been homeless, albeit briefly, again, I can relate.) And I think it shows that it’s totally normal for consenting adults to have sex, which I think is a good message to send.

Well, Im’ quite relieved to see someone sharing my opinion about Matsumaru 🙂

Well, it’s not that I hate him, but thr “takes advantage of her while she’s still emotional from her house being burned down” really made me angry against him >

In the manga, Matsumaru is much more likable and understandable. I like the manga-Matsumaru, but the anime-Matsumaru is a bastard. However, episode 2 helped improve Matsumaru’s image a bit.

this anime is pretty nice to watch. i definitely like it and i hope more come out soooon. (jus to let u know i like almost any romance anime (but has to relate to modern day life))

Hi there ,
i just start to download the first 3 episodes but i do not know what i will see a good anime or another poor serias !!

This anime is great, the intro is good, the song is superb and the animation is great too. The episode 9 is quite good, some of the subjects of the story are well done. You can tell there’s something that keeps you watching the anime.

I can’t belive the anime is only 9 episodes long… geez! I WANT TO SEE MORE!

I loved this anime! The song is awesome and catchy. Why do they make really great anime only 9 episodes long? I seriously checked back at the site I downloaded it from for like a month cuz I didn’t really think it was over. I REALLY want to see it continued. I think the whole “taking advantage of her” is a little wierd. It really calls for an understanding of the human psyche.

On one hand, she was in schock and needed something to emotionally latch on to. Being a girl (no offence ladies, this is a great characteristic) makes her a lot more susceptible to hurt because women tend to express and deal with feelings and emotions a lot better than men. Matsumaru was there for her and he was the closest thing to a male friend she had. You have to admit: people of your opposite sex can comfort you better than your own sex can.

But, on the other hand, he really took her in as a friend and took it too far. Personally, I’m waiting for marraige. But, being a hormone-filled guy, I , too, would I jumped at the idea of having a girl live with me… especially if she was as cute as Aka! Over all this was a great down-to-earth series. I REALLY wish this would have gone on! Does anyone know of a series that is similar to this?… or one that is really great? Please e-mail me at ‘radmancaner @ gmail. com ‘
I’d love to hear from everyone!

I really like this anime. When I saw it I thought it is boring however, it is much pretty interesting especially in the last part. I was shocked also in the aggressiveness of the characters in the anime. I didn’t expect that they will have sex in one night even though they didn’t know each other so much…