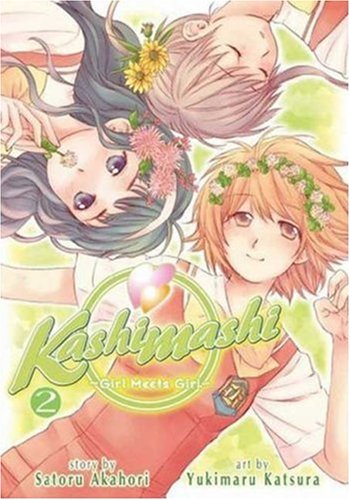 Okay, so it’s been a while since I posted on this blog. I finally graduated and I have some free time to read stuff, including manga. So I finally read the second volume of Kashimashi, only about three years after I read the first one… At least the complete series is already out!

In this chapter, Tomari really starts to understand her feelings for Hazumu. Which is that she wants to bone him/her… Or at least keep Yasuna from getting with her. This makes Tomari kind of a bitch. But she’s also Hazumu’s childhood friend, which wins her points. Conflict! Hazumu also shows that she is less decisive than Hamlet. Which is to say she can’t even pick which kind of cotton candy to eat (they all just taste like sugar anyway, kid!).

Ayuki steals every scene she is in. But maybe that’s just because I have an obsession with Ayuki. She should really be one of the potential girls for Hazumu. And Hazumu’s best friend who is a dude is pretty hilarious. First he denies having a crush on his (prior) bro. Then he gives up and has lots of fantasies that are really wrong.

Kashimashi is pretty formulaic and situational, but that doesn’t mean it can’t be entertaining as well. The characters all mingle well with each other and a sort of equilibrium is achieved. It also doesn’t hurt that the manga is really well drawn and visually appealing (minimum of dudes per panel). I might pick up the Kashimashi Omnibus(es), which are apparently the entire series, halved. So you get vol 1-2.5 in the first one and 2.5-5 in the second one, which is due out in December. For like $10 each. Sounds good to me!

Disclosure (because I guess the FCC requires it now? But I did it before anyway): Seven Seas Entertainment provided a review copy of Kashimashi Vol. 2 to me for free. Thanks guys!

welcome back! i also previously purchased the kashimashi set as well, sweet thing to read when bored