So I kept getting email from Appliya Inc., which is apparently making Evangelion-themed iPhone apps. I mostly ignored these until I realized they were trying to give me free apps so I could review them. Hey, I have an iPhone! So I got some promo codes and the apps. Here’s some reviews. 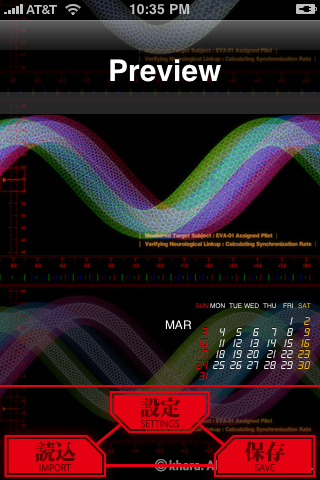 This one’s kind of interesting. It’s an app that will generate an image that you can use as your iPhone’s wallpaper. It basically takes one of 12 images and you can overlay a calendar on it. It’s pretty limited because you can’t add more images. The images are not really that interesting. Have I mentioned I’ve never seen Evangelion? Anyway, if you’re a fan I guess it’s cool. The app makes the calendar based on the month and year, though it only goes up to December 2013 (which is one year longer than it needs to be, apparently). Pretty cool if you don’t already have a calendar makin’ app and you like the images (though rotating through them might ultimately become kinda stale). 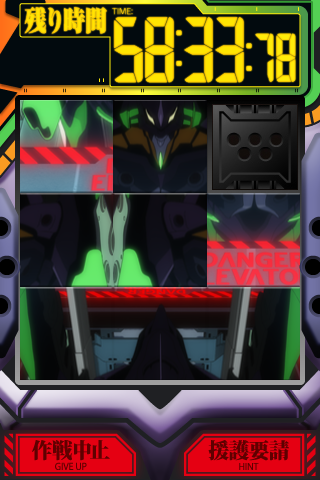 This is just the slidey puzzle game that I’m not very good at, times 9. But you have to unlock the current puzzle to get the next image. I’m pretty sure there’s some kind of algorithm for going through these puzzles if you know which square goes where. But I’m too lazy to figure it out because solving the puzzle is ultimately not very fun. You can choose between easy, medium and hard difficulty (probably determines how effed up the computer scrambles your puzzle) and 3×3, 4×4 and 5×5 grids. It’s pretty easy to get through them all on easy 3×3 mode!

So that’s about it! As an iPhone developer, I can say that the apps work pretty well. They don’t crash randomly, which is hard to accomplish in Objective-C! The premise of all these Evangelion-themed apps is kinda funny. They could literally make anything based on the franchise. I kind of expect to see an Evangelion Farts app next. Anyway, thanks to Appliya for sending me the apps. Go to their website for more info on the first 5 apps they’ve made so far.

I’m glad Evangelion is being merchandised again. It really was a landmark series.

Impressive that you coded all this yourself but one small glitch on this website. The ‘no follow’ tags are not working correctly with username links. Hope you can fix it 🙂 Wish mine looked as good as this.

How can you review anime and not have seen Eva :[

It’s interesting that they came up with the idea of an Evangelion app at this point in time – one would imagine a Haruhi app would be the natural result of researching what anime are now wildly popular.

Did you think it was good or bad that they made you do puzzles to get the images?

That’s some weird permalink craziness. I’ll have to look into it.

Puzzles are good incentive for images. I mean, that’s the whole point of the app :p

wonder if these applications will appear in the evangelion NERV phone…

Heh, I’d love to have an Eva calendar for my Windows Mobile powered phone.