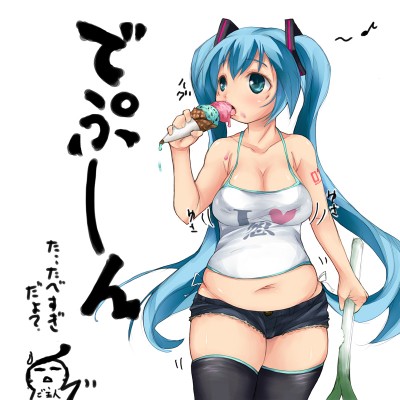 So what’s the deal with anime and manga products getting bigger and bigger? I mean, who are the ad wizards who came up with that one? </end Seinfeld reference>

Anyway, I’ve noticed that anime is getting packaged in larger and larger sets (like the half-season sets and full season sets from Funimation) along with some new giant manga volumes (like the Mao-chan I just got from Del Rey that’s like 380 pages!).

I wonder what this is a response to. The previous method of releasing series very, very slowly (I remember Jeff Lawson’s post about how Full Moon wo Sagashite would take for-e-ver) might not have paid off for distributors. So instead, they’re slamming fans with lots of a series off the bat. Maybe it just makes sense for companies with a trillion licences too (like Funimation and Del Rey, the two companies I referenced).

Is it better or worse for fans? The whole slow release thing just doesn’t make sense in the world of digital downloads anyway, so this is probably a response. I’m sure jpmeyer would be able to give a good explanation of this (he probably has already). Just thought I’d mention this since I noticed a trend appearing with the appearance of giant-sized manga as well.

I’d much prefer to buy a thinkpak of an entire season for $30-50 instead of paying $18-24 per DVD. Perhaps that’s the reasoning behind this move.

I’d rather buy a whole series rather than volumes, as long as the full set doesn’t cost an arm and a leg. The only appeal to me to individual volumes is this broke girl sometimes had $20 to spend but rarely has $150. I’d bet most people just wait for a full series to release though, rather than buy as smaller collections are available.

At the same time, I feel for some series we’re losing out on the wonderful Art boxes and collectables we used to get. I mean, I just got the Koi Kaze and Ichigo Mashimaro DVD’s from the old Geneon, and they’re beuaitufl…sturdy boxes, stickers, pencil boards, inserts and tons of art. We have the “Limited Edition”‘s from Bandai, but only very few series get limited editions.

I do, however, love the trend of bigger manga…no, not bigger page counts, just BIGGER. Wider trim and all. Sunshine Sketch, many of Seven Sea’s yuri books, a lot of Yen Press’s manhwa, Pixie, Maka Maka. Bigger books = better books. I’ve noticed some Waldenbooks’ having problems with too-small shelves though, lol.

What’s not to like about thinpaks? They cost less, occupy less space on your shelf, and allow you to watch the whole series (or at least a significant part of it) rather than waiting weeks between each volume. For series released in both single and thinpak form, the thinpak version usually has less attractive packaging and may lack extras, but that should change as more series go straight to thinpak. It’s not like there’s significantly more space for artwork on a standard artbox than on a thinpak box, and there may actually be more space on the individual disc cases (since the cases in a thinpak set don’t need to have all that crap on the back cover). All you really lose with straight-to-thinpak releases are the physical extras, and personally I’m not much for physical extras.

Same, but what do you think of FUNimation splitting entire seasons (26 episodes) in half, and selling each half for $30-50?

$30-50 for 13 episodes sounds quite reasonable to me, so I’ll keep snapping them up. I’d rather pay less of course, but then I’ve zero control over pricing so all I can do is keep digging into my pockets.

Some series are worth decking out in full bells and whistles, but if we’re picking a one-size-fits-all treatment then I say straight to thinpaks.

I guess there’s the issue of trying a series before you commit to buying a whole season (or half). But… there are other methods for trying out a series, I guess.

I agree with Kairu Ishimaru, I still can’t get that image out of my head 0_o

As for the main topic, though, I haven’t thought much about it since I stopped following the North American industry quite some time ago, but I found that giant AzuDai manga omnibus to be pretty useful.

With manga, it’s cheaper. Bigger = cheaper for the companies. They won’t have to spend so much money on keeping every single volume in print. Instead, they just slam 2/3 volumes into a giant-sized package.
The negative aspect about it is that if you collected 2 out of the 3 volumes and the 3rd one is out of print, you’d have to buy the giant-sized one to complete it.

There was a Huge discussion thread on AnimeOnDVD.com’s message boards (don’t remember which specific forum, but I think it was R1 and/or English Track) about the possibility of 1 and 2 cour sets (13 & 26 episodes, respectively) being sold and how that would affect the overall anime econimic environment. The general conclusion was that there was a very strong likelyhood that it would be as good as or better for the market as a whole. Plus the fact that you don’t have to wait a year or more to finish a series (once the release strarted) was a big plus for consumers.

I personally like big sets. Not so much box sets, but I fondly remember the telephone-book-sized copies of X1999 I used to read more than…five, six years ago now? Pretty art spread over huge pages. ^^ Only thing that came close to that that I see here in Australia (where I once again got into anime/manga) was a Furuba copy, and it was hard cover. Ugh.

If sets had extras, though, I reckon would be goot incentive to buy. ^^ And I can definitely understand how it’d be easier for manufacturers to package it all at once.

What about that pic? I almost thought you ment that the manga charaters were starting to get fatter or something xD
Honestly, i must say, that the picture wasnt ugly… acctually i kind of liked it, a normal person’ish.
And if Miku Hatsune was real, maybe she’d look like that xD