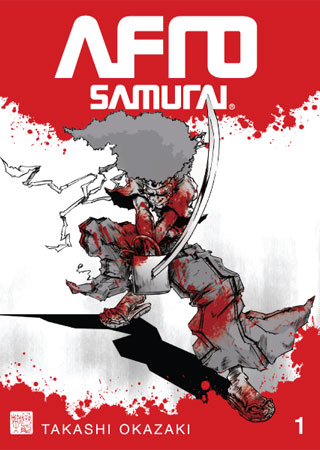 Years ago, a swordsman who wore the No. 1 was brutally slain by a power-hungry gunman named Justice. The swordsman’s son witnessed the murder, and has grown up to become the cold-hearted warrior Afro Samurai. Afro has honed his skills with a single purpose in mind.

With the No. 2 band around his forehead, Afro sets out to give Justice his due. But with scores of assassins and two-bit warriors eager to kill the No. 2 and take his place as top contender, will he survive long enough to avenge his father’s death?

Review:
So I reviewed the Afro Samurai anime series a while back. Apparently they adapted it into a manga. The back of the book says “The basis for the hit Spike TV series” but I’m pretty sure this manga came afterwards. The origins of this manga are actually kind of confusing to me since it reads like a normal graphic novel, left to right. I’m not sure if it’s flipped or if it was written for a Western audience. I guess it doesn’t really matter too much either way.

The manga starts off much like the anime with Afro seeing his dad, then no. 1, killed by that gunman and getting the no. 2 headband. He grows into a psycho killing machine whose only reason for living is revenge. But from there, it seems almost all of the plot elements are different from the anime (or I totally forgot everything that happened in the anime).

Afro goes from town to town killing people and looking for no. 1. It’s funny because unlike a normal protagonist, Afro has no problem killing anyone, using women as human shields, kicking guys in the nuts, etc. He’s not really likable at all. He is a badass, but he doesn’t score points for saving anyone. Of course, the guys he’s fighting are kind of jerks too (some use naked women as dining tables, wtf?) so that must make his behavior okay.

One interesting thing about this manga is that it’s presented in three colors: black, white and red. Yes, there’s so much blood spilled that the publishers deemed it necessary to actually color the blood in. I wonder who had the job of doing the blood after the pages were inked in? Or maybe the artist specifically decided to do the manga in three colors.

I think heroes are generally interesting because they have a sense of humanity to them. Superman is boring because he’s basically invincible. Batman is interesting because he’s got some issues (and he’s mortal). Afro Samurai is also boring because at this point in the story he has no humanity and for all purposes he’s invincible. A lot of the art is so confusing that I’m not sure exactly how he survives stuff, which doesn’t help. Judging from the anime, Afro really never does gain his humanity later on and the story ends up feeling very two-dimensional (no pun intended).

This volume ends with Afro being thrown off a cliff by the guy in the mascot costume. I imagine the next volume will have some Afro flashbacks. Probably not enough to make the character interesting, but it’ll fill up pages. At the very least, the manga doesn’t repeat the anime scene for scene, which is nice.

The whole blood and guts thing kind of eludes me at this point. I’m sure I would’ve thought it was cool when I was 11, but for me it seems a bit excessive and pointless.

Many thanks to Tor/Seven Seas for sending me a review copy of Afro Samurai Volume 1!

I just saw Afro Samurai Resurrection a few weeks ago. Having never seen the original anime nor the manga, I thought the animation was great, but the story was so-so (probably because this was an one-off movie and the fact I didn’t really know much about the character backgrounds).

They did do a good job about explaining stuff like the #1 headband and the fighting animation was just pure awesome. Seeing him fight a guy wearing a teddy bear mask was also mildly interesting.

well you should know the story by itself is in fact very two dimesional(misspeled) afro does not show any redeming qaulitys at all in the movie resurection (wow i feal like im about spoil it for every one) afro feals some remorse but that’s it he contiues on his mad killing spree.

if you like the anime/manga for it’s style it’s bad ass ness it’s music(it’s the wu coming threw taking ******* for there garment’s!) then you’ll love it plot wise no