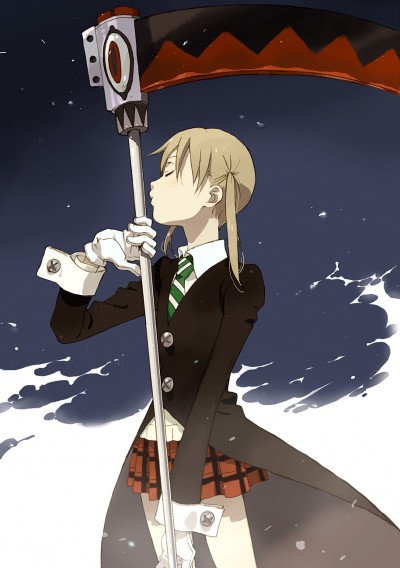 Anyway, Maka is a female meister (does that mean “mister” or “master” in German?) who uses Soul to kill demons. Soul is a scythe, but he also takes the form of a human. Sometimes he’s also half-human half-scythe, which looks pretty funky. He needs to eat 99 demon souls + 1 witch soul to become a super weapon. And he’s already at 99 at the beginning of the episode.

It appears, then, that Soul Eater is going to be a really short series. But Maka and Soul make a mistake and end up eating a cat’s soul instead. Back to the drawing board… I kinda like the idea that we start in the middle of where the story might end, then do a “reset end” so we can avoid any potential resets later in the series. Unless the author is just a sadist.

What kind of weirds me out is the cartoony world of the meisters. The sun and moon look really wacky and there’s a cg castle. Also, Maka’s dad seems to be a version of the ultimate weapon that Soul is trying to become. So that means her mom is a meister as well? And um… weapons and humans can procreate? Weird. So I guess Maka and Soul could be an item… except that Soul doesn’t like the flat-chested type. The whole making babies with your weapon thing sounds like it could open the door for some really weird fan-fic.

Anyway, the first episode of Soul Eater was passable, I suppose. The character designs are good but the animation itself is kind of choppy. Or maybe it’s just because I encoded the thing to play on my iPhone… That could definitely be it. The juxtaposition between the wacky shinigami world and the serious demon killng doesn’t really work for me either. I’d prefer all wacky or all serious or maybe a lot of serious and a little wacky.

I’m quickly running out of anime to watch while doing my daily workout, so these belated first impressions posts could get sparse until I can get back to the mothership and encode more stuff.

He is her stepdad.

But humans and weapons can still mate, right? RIGHT!?

Demon Slaying Action is always an instant WATCH for me, and so far the series doesn’t disappoint. It’s also a crime to watch this on a small screen. ALL HAIL HQ MP4 ENCODES!

If the animation is choppy, then something’s gone wrong. If there’s one thing Soul Eater has going for it, it’s the high quality and fluidity of the animation.

I’d suggest watching one of the good ol’ HD releases that are around.

Wikipedia says that Death Scythe is Maka’s father not her stepdad.

They can still mate when the weapon’s in HUMAN form!

And Soul Eater has good animation going for it. I can only say perhaps D.Gray-Man is anywhere close in my eyes when it comes to the current shonen airing.

And no, I don’t watch Gintama.

I am on episode 24 and let me tell you. Its perfect and it was defnately your iphone with the choppy animation.
BEST ANIME EVER!!!

or a tadashi sub @ veoh.com

Well, i’m from there so i should know it *gg* (Should *gg*)
In the end, the wrong mispronunciation is kind of funny for me ^^
*Go Go Japan, we need more German words :D*

Huh… well, thanks again to your blog I’ve found another interesting series. ^.^ It’ll be neat to see how this does in the US (have they already dubbed it?), and I’m REALLY loving the concept of the meister-weapon partnership. Plus, Maka’s character design ROCKS!

lol meister is someone who crafts and has a special skill involving use of certain stuff.

It is indeed Meister

The word in german does mean master

but the use of it impied is

A person referred to as x meister is one that has extensive theoretical knowledge and practical skills in their profession, business concerns and training.

My friend told me to watch this. I didn’t get a chance, but I read the manga…
Not a fan. I’m too used to the ultra-serious shinigami of Death Note, Bleach, and Zombie-Loan to think of a “God of Death” as a comical thing in any way. Were they trying to make it look cute?
And the whole weapon-turning-to-human thing, with it “eating” demons didn’t do anything for me. Give me the D. Gray-man demon hunters anyday.

AmeKage… Shinigami’s good reasons to act like a retard that are explained in the anime, but it looks you haven’t hear him when he’s seriuos… just scary…

However, is one of the best series I’ve seen, the final of the anime is a shit but all behind 47 chap is really cool.

AND well, actually Soul was born as a Human, and discovered his skills later, so I think he can still mate with Maka xD

I see that you think the term “weapons” in the series are just..
i dunno, weapons. XD
Well, they’re not just weapons. They’re totally human just born with a special ability to transform into a weapon.
And i think that’s the main point of the series. 8D
asdfghjkl. WELL NEVERMIND. lol. :>