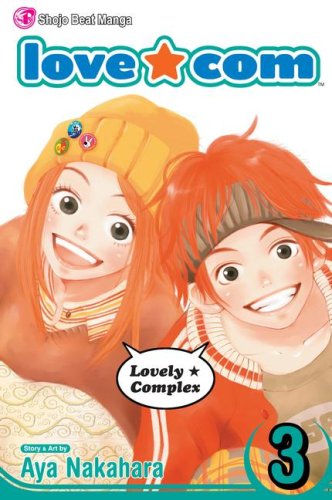 Review:
In this volume, Risa and Otani are both still a bit confused about their relationship. Otani says a lot of messed up stuff, like “It’s hard to believe sometimes, but Risa is a girl!” Ouch. Risa battles her confusion and finally decides that she really does love Otani, and that she should just go for it. Go Risa!

Of course, our two heroes would have it way too easy if they were left to their own devices. So two new characters are introduced in this volume. First is Haruka, who is Risa’s old childhood friend. Haruka happens to be tall and kind of suave, but Risa just remembers him as being a crybaby. And he still sort of is, but he tells Risa that he’s planning on asking her to be his girlfriend, which spirals her into a chasm of madness. Or at least, she can’t decide because something (her love for Otani) is fighting with what seems like an okay coupling. But the fact that they look good together on paper doesn’t change the fact that they are both weak vs. dogs, and Otani proves he’s boyfriend material by saving them both.

After dealing with Haruka, Risa has to compete with Seiko, a super cute incoming freshman. Seiko develops a crush on Otani and pursues hard, stealing a kiss from him while his guard is down. Luckily for Risa, Seiko turns out to be an epic trap! Oh man, Seiko is pretty much my favorite character. It’s actually kind of poignant the way that Seiko goes after Otani, even though he (Seiko) is a dude. Risa finally convinces herself that if Seiko is willing to go that far for Otani, her own height shouldn’t matter. It’s still an uphill climb though, since Otani is pretty dense about the whole situation.

Despite all of the wacky comedy, Lovely Complex is still a pretty damn good romance story. Risa is a real character with real insecurities (I guess Otani is, too) and the plot actually seems pretty plausible. At the end of the manga I felt triumph because Risa finally acknowledged that she really likes Otani. Now the trick will be for her to convince him to reciprocate. This could take a while…

I love this series! It’s so realistic and it could actually happen, though of course I doubt it would happen EXACTLY the same way. I’m a girl and quite tall for my age, though unlike Risa I have not made any efforts to get a boyfriend, I just go with the flow. Anyway, this manga and the anime ROCK!