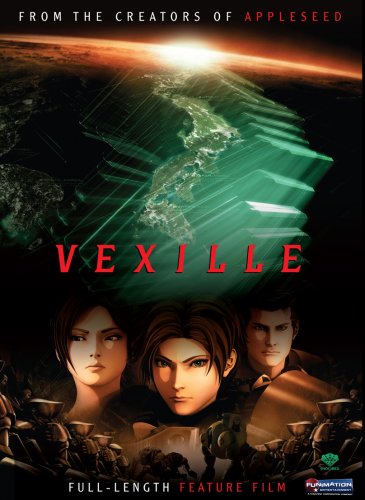 DVD Blurb:
2067: ISOLATION
Japan seals herself off from the eyes of the world in the face of unilateral international policy setting strict limits on the use of robotic technology. The island nation exists only behind the veil of seclusion. No sour shall enter. No soul shall leave.

2077: REVELATION
The veil is breached. Japan is infiltrated by agents of the organization S.W.O.R.D., a fighting force operating outside of the protection of the United States and her allies. Their mission: Determine if the Japanese are developing banned robotic bio-technology, forbidden due to its threat to humankind.

In the battle between machine and man, humanity stands to suffer most.

(I got the trailer in this press kit that I was sent, so I guess I might as well include that, too!)

Review:
So it seems like Japan is back to its isolationist ways after the UN outlaws advanced robotics and cyborg research. For ten years, Japan hides in a neat electromagnetic shroud shield thingy. Yes, ALL of Japan goes hikikomori!

But strange things are afoot. When the US Navy team S.W.O.R.D. breaks up a Japanese cyborg party and comes back with the leg of one of the Japanese guys (no joke), he tests positive for being part robot. The Americans then decide to break the shroud of mystery and infiltrate Japan!

One of the weird things about this movie is that the point of view is totally messed up. Our point of view is from the American side, yet this movie (anime?) was made in Japan. So it’s Japanese trying to tell a story from the perspective of Americans infiltrating Japan! It’s already confusing enough, since the Americans seem to be speaking impeccable Japanese (I was watching with the original Japanese sound track).

It’s also funny to hear “Americans” use Japanese sayings and generally exhibit Japanese mannerisms throughout the movie, like when Vexille tells some villagers that she probably shouldn’t say anything since she’s an outsider but says it anyway, then bows at the end. Maybe the Navy agents just got a lot of cultural training before the mission.

I guess I should mention the action level in this movie. Being a completely CG anime, the action scenes are really the point of the thing. And in this case, they really are quite good. There’s a stiff animation here and there but for the most part they actually live up to expectations.

The thing that the movie fails at is drama. It’s strange, because almost everything but the human models in the movie look passably realistic. I guess the humans really shouldn’t look completely realistic, otherwise it stops being an anime (I’m not quite sure it counts as one anyway though) and just becomes a live action simulation. But it’s depressing that the models still can’t show enough emotion to pass at doing drama. Anime has stuff like giant sweatdrops and people falling over to convey emotions. But as a CG affair, Vexille can’t really do the cartoony things, and it can’t recreate actual human emotions well enough either. The movie does one thing right, at the very least. It reproduces “The Rachel” in stunning CG glory: 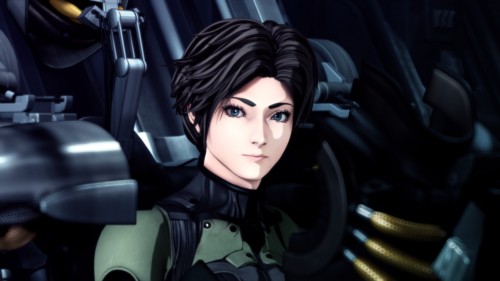 So Vexille is not going to win any Oscars for CG performance. How does it work as just a movie? There are quite a few really entertaining dramatic parts that are unique to Japanese cinema. Like how the main military dude in the huge control center stands in the back giving orders, and when something bad happens he falls back into his chair. This happens multiple times in the movie.

Also, the bad guy in Japanese cinema always has to have a really dramatic death scene. This also happens. Finally, I think it should be noted that pretty much everyone at the end of the movie ends up with some kind of leg injury. It’s like a Shakespearean tradgedy, but instead of everyone dying at the end, they all just have sort of a limp…

Vexille is kind of sleek and cheesy all at the same time. The CG works for it, but also hinders the dramatic parts. But who cares about drama with all the fighting anyway, right? I guess that overall, it’s a mix of good and bad. Your enjoyment of the film will depend on your expectations and ability to enjoy cheese when it occurs. I thought the movie would be horrible, so I was pleasantly surprised when it was slightly better than average.

Many thanks to Funimation for sending me a review copy of Vexille!

‘Sleek and cheesy at the same time’ is a neat way of summing up this one. It lacks a certain something that the two Appleseed CG movies have but as an action movie with a an energetic soundtrack it fares quite well.

Things like the limping race at the end kinda took away the pathos of scenes that I suppose ought to be pretty serious – I felt I should have been on the edge of my seat and amazed at how they were struggling but the limping thing just looked a bit stupid.

At the end of it all, Vexille is intended to be a shiny blockbuster kind of movie so I’d say it was a success. If you’re interested in the director’s other stuff, I’d recommend his live action sports drama Ping Pong. It’s so different you wouldn’t guess it’s by the same director but it’s a great movie.

@Martin: Yeah, there were quite a few unintentionally funny parts like the limping scene you mentioned and just the random melodramatic parts that didn’t work because the CG models couldn’t really pull off the emotion. You can take those as pluses if you like unintentional humor.