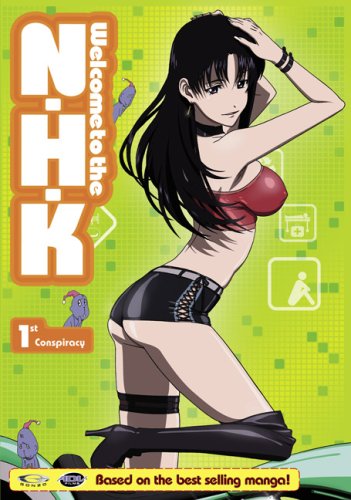 Story:
Hikikomori Satou thinks the NHK is behind some massive conspiracy to make Japan into a bunch of hikikomori. Cute girl named Misaki tries to save him (and has ulterior motives?). Old pal Yamazaki tries to get Satou to make an h-game with him. Insanity ensues.

NHK is sort of strange, because the very people who can understand the lingo and all the jokes are probably the same people being having fun poked at them in the anime itself. I guess you don’t have to be a severe hikikomori to get all the jokes, but you’ve got to have some kind of obsession with Japan, especially considering this is a North American release of a Japanese anime.

The DVD:
Like I said before, the cover totally makes no sense. I think it’s Satou’s ex-senpai dressed as a hooker. The DVD itself only has a few extra features like a clean opening and ending, which are actually pretty sweet (I like the OP a lot). There’s also a sort of otaku encyclopedia for people who don’t know their NEETs from their standard otaku.

I listened to the first episode in English, and the rest in Japanese. The English voice acting isn’t too bad, and I like that they threw in a bunch of profanity to keep things interesting. This is apparently a “TV MA” rated DVD. I think they kept a lot of stuff (like nipples) whited out as in the Japanese tv release so it wouldn’t be considered an X-rated anime dvd or anything. I betcha they put the nipples in for the Japanese release, though.

Conclusion:
Welcome to the NHK is a weird offering. It’s about a dude who, in real life, would pretty much be the scummiest guy alive. The things he does are repulsive, and yet this is completely a comedy (I guess satire would be a good fit, too). You might find Satou’s antics to be totally unamusing, but I think he’s funny. In that “I totally wouldn’t do that” sort of way.

Many thanks to ADV Films for sending me a review copy of Welcome to the NHK Volume 1!

God… I do not look forward to having that DVD case on my shelf, too bad ADV never goes through the trouble of making reversible covers…

The show itself however, was great.

I definitely look forward to having that on my self. Preferably front-cover first. 😛

I wish the cover had Misaki. She’s way MOEEEEE.

That’s one seriously misleading cover – a bit of a weird choice considering the show’s content. Which is a shame because I enjoyed the series enough to want it on DVD…but I’d be seriously embarassed to have that on my shelf. Fortunately I buy most of my DVDs online, which ought to prevent awkward looks at the checkout in HMV or similar when I get around to collecting this show.

Thanks for the review. Actually, I’m surprised that the show even got an American release.

I personally love this show. It’s easy for people to misunderstand it, and pass it off for its “Otherness” without bothering trying to understand the characters, since a lot of stuff is about the dark side of Japanese society that might turn off people at a superficial level.

The show does meander a little after the middle. After an intense turning point (or what would have been one), the director had so much potential to move forward, but arbitrarily decided to keep Satou going through two more problems before exploring more in depth the relationships of the main characters. The rest of the show is phenomenal, though.

Anyway, the show’s definitely not for the prudish or judgmental, I’ll say. I think the manga is edgier, though.

BTW- shouldn’t it be the manga that’s based on the anime? Even then the manga diverges a lot from the anime, especially the end. Just another way the cover is misleading….

I don’t think Satou is the scummiest, really, since what he does is harmless and directed more inward towards himself than outward (he tries to take a pic. of the girls because he wants to prove to himself how low he’d become). He’s just one of many suffering from social withdrawal and the show just depicts his struggle with himself.

More appropriately, the title of scum should be directed to those with destructive tendencies who would directly harrass other people, like some of the youth in this side of the world…

Now there’s an… intriguing cover. Does the class chairwoman even figure into the story in the first volume in any substantial way? Makes me think someone at ADV just took a random fanservice page from the tankoubon or something like that.