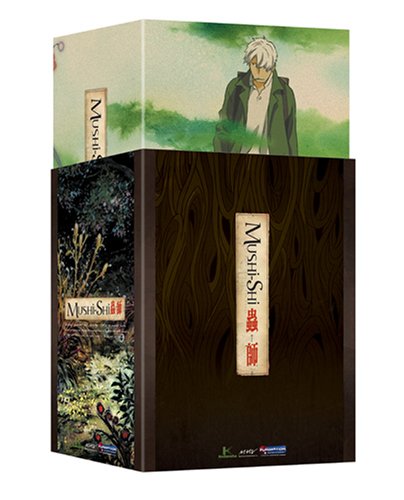 Story:
Mushishi are not bugs. They’re actually pseudo life-forms that were around before life even existed. They usually can’t be seen, but their effects on people can be pretty strong. Ginko, a “Mushi-shi,” travels the world ridding people of their Mushi afflictions and learning more about them. Aaaand that’s about it.

Analysis:
Mushi-Shi is really an out there anime. It’s basically a Mushi of the week show, with Ginko solving a Mushi mystery each episode. Sometimes all that’s required is to cover the patient’s ears. Other times the Mushi will take over a person’s life and there really isn’t anything that can be done. The interesting part isn’t how Ginko solves the problem, but rather just learning more about these weird creatures.

I tried watching Mushishi with some buddies, and it didn’t really fare too well. I guess it’s because they weren’t really into anime and the story ended up being a bit slow. We also watched it in English, which was quite the exercise in lameness.

But watching it again alone, I could focus more on the story and the animation. Plus I didn’t have to watch it in English. I think Mushishi is probably an anime best experienced in a mellow setting. It’s not a great anime to watch if people are expecting explosions and cat girls, etc.

Animation and Art:
One of the best things about Mushishi is the art. You can’t really have these otherworldly creatures that are drawn badly, right? The Mushi take varying forms, like that of a snail, or a bug, or random doodles flying in the air. Now whenever I see a paper bag flying around, I immediately assume it’s a Mushi…

The whole idea of Mushi is pretty hard to believe, but the animation really help in suspension of disbelief.

DVD and Extras:
I got the Mushishi starter kit to review, which includes a pretty looking box with some Japanese (and about 70% that I can understand!). The DVD case has some neat extras like a booklet and a Mushishi postcard. This one is Ginko looking stoic. But I think they’ll probably all eventually be Ginko looking stoic.

The actual DVD has some interviews with the voice actor for Ginko and the Director, all in the original Japanese. It’s interesting if you’re into it. Too bad there’s no interview with the original mangaka.

Conclusion:
Mushishi is a somewhat slow anime. But given some patience, it can be interesting to watch. I’d say to spread out the viewing, as 5 whole episodes of Mushi action (or inaction) can be a bit much. The episodic nature of the anime definitely helps here.

Many thanks to Funimation for sending me a review copy of Mushishi Volume 1!

Man, Mushishi is such a great show. I really should go back and watch it again.

Interesting that your friends weren’t into it. Everyone I’ve shown Mushishi to, regardless of age, gender, or whether they were an anime fan or not, has appreciated it on at least some level.

I can’t wait for my DVD of this to arrive…if the R2 looks as pretty as the pic above, so much the better.

As Orion said, most people I’ve talked to who’ve seen it have been as enthralled as I was – it has a small but very enthusiastic fanbase. It is a very episodic show, but you do learn a bit about Ginko later on.

I recommend watching it on a rainy afternoon or something because the atmospherics of this show are nigh-on unbeatable. That and the fact that it’s one of those shows that really makes you think long and hard about human nature and our relationship with the natural world.

Yeah, I bet watching it in the rain would help out the mood a bit. Actually, it’s raining now, but I already finished the volume! ARGGH.

Will volume 2 have exploding cat girls?

I like Mushishi. My Japanese director friend told me to watch it as I “would find it interesting”. I did =) True, it’s kind of slow, but slow in a good way as it doesn’t rush anything and lets you enjoy the unique artwork and the amazing sceneries more.

I have watched all episodes and i confess i love them .
Every episode adresses a human myth .. and the aproach is so different,
sometimes the world is a ” shadow on the wall” other times is just impossible to understand.
The scenery and music are in a different class .. it all converges to create a belivable reality where drama and simple life merge with
fantasy and supranatural.
I strongly belive this anime should be shown all over the world as a
morality lesson for teenagers and adults , it would definately increase
peoples awareness for their enviroment and fellow humans.