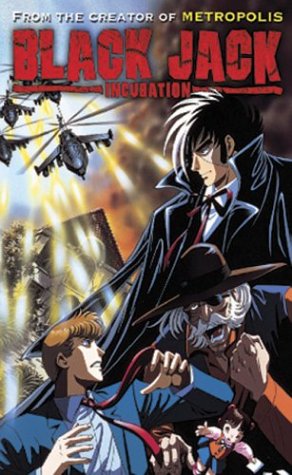 Story:
So in this volume, Black Jack encounters a man who had a surgery from a master surgeon. Black Jack becomes more interested in the man’s surgeon than the case itself. Based on just a song, they search for the doctor in a civil war zone.

In the next volume, Black Jack goes through some feudal Japan nonsense and ends up diagnosing Mesothelioma! Which just happens to be a really high-paying Google Adword! Or at least, it used to be?

Analysis:
I started out really liking Black Jack, but it seems like they’re really stretching for plots now. The first one has a bit too of a sci-fi/miracle theme going. It’s not really interesting for a medical show to have supernatural stuff happen since it takes away from the actual medicine.

The second episode was just horrible. The whole time I was thinking to myself, “I’m going to be sooo pissed off if this is a dream.” And guess what, IT WAS A DREAM! Just like the eighth season of Dallas! At least this dream sequence didn’t last a whole season…

But yeah, I’m getting tired of this random junk. I want my old Black Jack back! Actually, I want my third season of House M.D. on DVD, but it’s not out for another week or so.

Conclusion:
The earlier volumes of Black Jack that I reviewed were pretty sweet. But it looks like Black Jack has finally jumped the shark. If all they can come up with is dream sequences and miraculous healings, I won’t have any part in it. Come on, Tezuka-sensei! Do better! Oh wait, you’re dead. Gomen.

Many thanks to Central Park Media for sending me a review copy of Black Jack: Incubation!