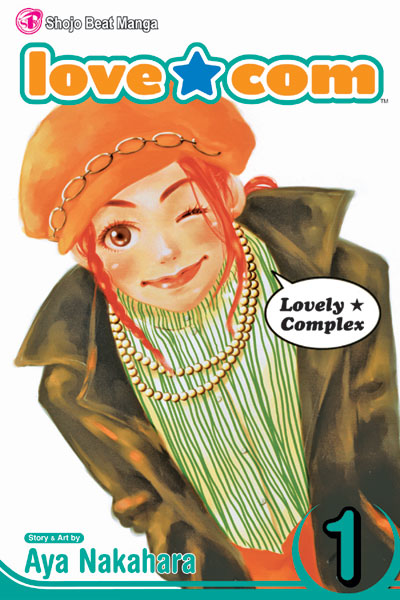 I really think Love*Com should’ve been called “Napo*Com” instead. Because it’s about a tall girl who falls for a short dude. At least it wasn’t called “Shota*Com” or “Loli*Com.”

Story:
Koizumi Risa is friggin’ tall for a high school girl. At least, for a Japanese high school girl. She’s constantly being called an Amazon or other weird names by Otani Atsushi, the shortest dude in class. Their constant bickering is a form of amusement for the entire class.

Life is not easy for the two, since a “normal” couple would consist of a guy who’s taller than the girl. It seems they both understand the other’s plight pretty well. At first, they decide to help each other get mates, but when that doesn’t work out, Risa starts falling for Otani. It’s going to be an uphill battle…

Analysis:
I’ve been watching the Lovely Complex anime. It’s pretty much the only anime I’ve stuck with from the Summer season. The anime goes amazingly fast while the manga takes a more leisurely pace. I kinda like the pacing of the manga better, personally. There’s time to reflect on what’s going on, instead being hit over the head with new developments. It might turn out hurting when the story starts getting repetitive, though.

Basically, Risa and Otani are meant for each other; they just don’t know it yet. Risa catches on near the end of this volume, but there are going to be a lot of obstacles in the path of their love. The comedy is pretty slapstick and wacky. It’s really fun watching the two get along and then realize they’re getting along, then get disgusted.

In the anime, it’s pretty obvious the characters are speaking in Osaka-ben, the weird dialect that Osaka from Azumanga Daioh speaks. It used to be that publishers would change any Osaka-ben to an American southern accent to compensate. Luckily, all the language is normal English here.

Speaking of the dialogue, I thought it was really well done. The translation itself is obviously not 100% strict since Otani says stuff like “Jumbo-gal” and Risa calls him “micro-boy.” That was actually pretty funny. The translation notes are pretty good, but they did miss the part where Otani calls himself “Kotani.” They should’ve explained that “o” is like a prefix meaning big, and “ko” meaning small. Oh well.

Also, I really like the use of the secondary characters. Risa’s best friend is endearingly meddling, and the rest of the cast keeps things interesting when they’re in a big group. Chiharu-chan, kawaii yo!

Character Designs and Art:
I like the character designs in the manga more than the anime version. Chiharu is waaaayyy too cute. She should get her own spinoff prequel where she goes through life trying to do things while avoiding boys. It’d be so moe!

Risa is also drawn pretty well. I also want to point out that she changes her hairstyle more often than Elaine from Seinfeld! I think Risa’s supposed to be about as tall as I am in real life, so we’d be a good match. Unless she started growing even more…

Conclusion:
Love*Com is a cute love comedy with a great hook: mammoth girl and midget boy! On paper, that sounds a bit contrived, but in practice, it works out pretty well. I tend not to go after shoujo stuff, but I’m really enjoying and looking forward to more Lovely Complex.

Many thanks to Viz Media for sending me a review copy of Lovely Complex Vol. 1!

Oh I love Lovely Complex the Anime. Its one of the only ones I follow from the Spring/Summer Season too (: I love the story! Though I did want to hit Otani a lot!

Thanks for this Manga Review. I didn’t know there was a Manga of it out yet but I will be sure to check it out!

I enjoyed your review of Love Com and the joke about not calling it Shota Com or Loli Com, hee! This seems like one of the few Shojo Beat titles to get.