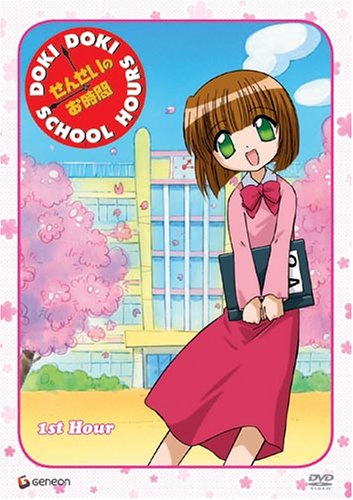 Doki Doki School Hours is that one anime based on a 4koma manga that people can’t help but compare to Azumanga Daioh. Not like that’s a bad thing to be associated with Azumanga…

Story:
Sensei no Ojikan (I prefer using that name) is a school kids 4koma anime. It does share quite a few similarities with Azumanga, but it’s no copycat. In fact, the first publish date for Sensei no Ojikan was two years before Azumanga was released.

The guys have their issues too. There’s the gay one, the crossdressing one (who isn’t the gay one, which is sort of confusing), the manga obsessed one, the one who acts like an old man… The only normal character is Suetake, who’s a dumb jock. I don’t really consider that a psychological issue,though.

Sensei no Ojikan is really about nothing. There’s no overlying plot; just the interactions between the classmates and their teacher.

Analysis:
This anime is really formulaic. Each character is designed to maximize overall joke potential. If the anime came off as being unfunny, this would be bad. Luckily, the jokes are usually pretty successful. Even though these characters have serious mental issues, they come off as being very likable. The humor is wacky, rather than being mean-spirited. Like Kitagawa is always teasing Mika-sensei, but it’s all in good fun. At least until Mika flips out and murders the entire class. But luckily that hasn’t happened yet.

After the first few episodes of character introduction, the series really takes off. Probably because the characters are so stereotypical, it’s easy to feel like you “know” them after just two episodes. It’s sort of like how Seinfeld got really good in the last few seasons because everyone “knew” the characters, except Doki Doki School Hours only takes a couple episodes to reach that. Afterwards, the anime just lines up joke after joke, some failing, but most succeeding.

Oyaji (the student who looks and acts like a 40 year old salaryman) is probably my favorite male character, just because of the misunderstandings he goes through. Girls will give up their seat for him on the train, Mika’s dad will bow to him super low (it’s a cultural thing), I wonder if there’s an episode where he gets arrested for visiting the school, accused of being a lecherous old man for gawking at the high school girls…

People think Lucky Star is awesome. I actually feel that Sensei no Ojikan is funnier. Whereas Lucky Star has its random Seinfeld moments (“Don’t you just hate waiting in line, I mean, what’s the deal?”), this anime is always in motion, setting up the next joke. Like a comedy shark! Or hummingbird.

One other note: this anime is done by J.C. Staff, who also did Azumanga. For some reason, I always end up liking J.C. Staff productions. It probably has something to do with their backgrounds and general animation style.

The Actual DVD:
The DVD comes with the typical extras, a textless opening and the Japanese text opening. There aren’t any other extras to speak of.

I noticed while watching that the show has a lot of otaku terminology that isn’t really explained anywhere. Sure, I know what a tsundere is, but do most people who buy this DVD know? It’d be useful to have like a glossary or something handy as an extra feature.

Conclusion:
Doki Doki School Hours is a pretty unremarkable anime. The characters are generic, the situations are generic, the art is pretty generic too. But for some reason, there’s an intangible that I really dig about this series. I just like the characters, and I like the jokes. I guess you could say the anime has a lot of “heart” but that’d be pretty cliche, too… For me, this anime ends up becoming more than just the sum of its parts.

Many thanks to Geneon for sending me a review copy of Doki Doki School Hours Volume 1!

How can you like THIS ?!
Well, sure, the first couple of episodes are pretty funny, but after that – it doesnt matter if you watch episode 4 or episode 10 – they are all absolutely identical ! You KNOW the gay joke, you KNOW the lesbo joke, you KNOW all of them, and they dont change till the end !

Well, I have been known to like bad anime.

Maybe it’s because I totally have a crush on Kobayashi and Iincho?

I also think it was pretty mediocre and generic, but somehow it was still enjoyable enough to keep me smiling, if not laughing, to the end. I think the pacing helped a lot. I don’t remember it feeling bogged down anywhere and devices like the quick portrait wipes helped to make brisk transitions between gags.