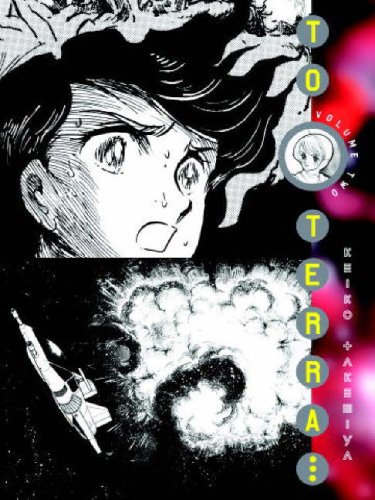 To Terra Volume 2. What do we get? More emo (much more emo), explosions, and effeminate Mu.

Story:
Keith Anyan, the elite member of Terra, is assigned to investigate the weird goings on with Terran pilots going insane. The Mu were causing this mass insanity to cover up the existence of their base on Naska. Too bad for them, because Keith is 1337!

Keith ends up crash landing on Naska with the help of his Mu buddy Makka (who kind of looks like a girl). Makka somehow escaped the maturity checks and ended up living as a normal human. But he’s a Mu! Meanwhile, on Naska the first natural birth Mu is born: Tony. It’s soon apparent that Tony has super powers beyond even Jomy’s. Keith somehow manages to escape Naksa and tells on them to the Terrans!

This is bad, because Terra decides to launch a couple of nukes towards Naska, killing everyone on it. Luckily a lot of Mu escape thanks to Tony, who’s willed himself to turn into a 12 year old girl. Okay, he’s not actually a girl, he just looks like one. What’s up with the effeminate Mu!? Due to Naska’s destruction, Jomy flips out like Obi-Wan Kenobi when Alderaan was destroyed, only like 100x more! We’re talkin’ serious emo here.

The Mu now have a new mission: to pwn Terra. They want payback, and they’re taking their own brand of justice to the streets! Stay tuned for the next thrilling volume: To Terra 3: First Blood Part II!

Analysis:
Things certainly did get more interesting in this volume compared to volume 1. I assumed the Mu would be the “good guys,” trying to coexist with the humans. Instead, once the humans destroyed Naska, the Mu grew some balls! It seems like they’re planning the complete destruction of the human race!

The developments with Tony and the other super Mu kids is sort of interesting too. The humans hate the Mu because they have weird powers, and the Mu now hate Tony because he has even greater powers. That’s like the mutant calling the super-mutant a freak! Actually, that’s exactly what it is…

While reading this manga, I can’t help but try and pin it to a genre. By the sheer amount of emotion involved (plus the bishies) I’d say it’s a shoujo. But with all the sci-fi stuff (and the sci-fi art is really cool and retro) I’d say it’s more of a seinen. I guess To Terra is an example of a manga that doesn’t really fit into a pre-constructed genre. It’s definitely enjoyable, partly because I’m so aware of the emo-ness that it’s becoming something of a joke to me. But also because I like where the story is heading (mutants destroying Earth!).

Conclusion:
To Terra started a bit slow in the first volume, but volume two has much more action and mind powers! Oh, and they upped the fanservice by showing Physis’ boobies in this volume. No lie! That should be worth the price of admission alone. Sorry fangirls, naked Tony seems to be missing a vital… organ. It’s not easy being Mu.

Many thanks to Vertical Inc for sending me a review copy of To Terra Volume 2!