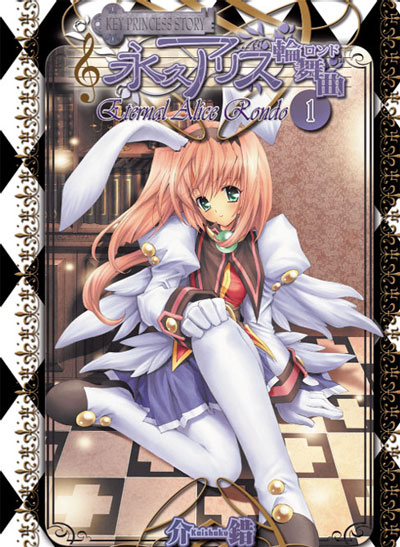 I saw the first episode of the anime version of Eternal Alice Rondo back in January of last year, but I never watched past the first episode. I’ve had the manga version lying around and I figured I should give the series another shot.

Story:
Aruto is an average boy who is really into some story called “Alice.” It’s not Alice in Wonderland by Lewis Carrol, but some other random story by a guy named Alternate L. Takion… What!? Anyway, one day he see a flying bunny girl outside of his window and immediately recognizes her as the girl from his book.

He tries to follow, but his sister forces him to take a bath with her (another WTF!?). The next day, he sees her again. Apparently her name is “Arisu Arisugawa.” That’s original… She fights other bunny girls to steal the stories within their hearts by jamming a giant key into their chests… I just felt really weird writing that last sentence.

It turns out that Aruto’s sister, Kiraha, is also one of these bunny girls. She and Arisu decide to team up in order to get all of the pages to create the new Alice story, Unlimited Alice Works Never-Ending Alice.

Analysis:
This story is really confusing, and F’ed up! I just realized that while writing the summary above. Where do I begin? The method that the Alice users gain story pages is just plain wrong. It’s pretty much rape, except in the chest, and with a Keyblade. I remember that in the anime, the characters even made panting noises, etc. Seriously, now!

Secondly, Aruto’s sister is way too into her brother. The manga actually had the term “Siskon” which they translated as “Incestuous Sister Lover!” She keeps on trying to take baths with Aruto, and he keeps on giving in… Hmmm. Later on, there’s a hot senpai (with a ginormous chest) who tries to get him to “experience new things” for some of her experiments.

I can’t help but feel like Eternal Alice Rondo is really an ecchi manga that’s masquerading as a “normal” manga. I think it really pushes the envelope as far as what can be shown and implied. The age rating is 15+, so I guess that’s about right. There isn’t anything that’s blatant enough to make it 18+. There’s a ton of fanservice, but I guess fanservice is just that.

Character Designs + Art:
The character designs aren’t really anything to write home about. The girls are cute, but then again, cute girls are a dime a dozen. If it wasn’t for the hair color, I wouldn’t even be able to tell them apart… Is there even a reason the girls get bunny ears? Besides to look cute? Ah well, maybe I’m overanalyzing things.

The actual art is really nice. Some scenes make no sense, especially the end of the last chapter. I seriously had to re-read a few times, and it still makes no sense.

The Actual Book:
The cover of this book is really cool. It’s got this “fake” dust cover thing going on that I like. The print quality is okay, though a few of the words got cut off on the edges. I also noticed a few typos, like where Arisu’s name was spelled “Arisugwa” instead of “Arisugawa.”

Conclusion:
It’s kind of weird when I get uncomfortable reading a manga that kids over 15 are supposedly reading. This is one of those books that I’d feel uncomfortable reading in public, like the bus or something. In addition, the plot is really confusing. But hey, it’s got bunny girls, and they’re pretty cute when they’re not raping each other…

Many thanks to DrMaster Publications for sending me a review copy of Key Princess Story: Eternal Alice Rondo Volume 1!

This is why I like this anime and manga… it seems innocent and cute on the outside, but there is an element of dark human desires and evils. The taking of the stories seem like rape to me also, and it probes into forbidden sexual desires. It made me look into the life of Lewis Carrol himself and discovered that he was a closet pedo. I think it’s great that you feel disturbed.. because it shows you haven’t fallen into the pits of depravity. ^_~

What didn’t you understand about the last chapter? That story is not ended and continues in the next volume.

Anyway, I’m surprised that the English translated version has such minimal editing, which I think is great.

The last chapter just seemed sorta rushed and the drawing was really confusing. I just had no idea what was going on.

Really? See if this makes sense: So far in the story, Alice-Users have been fighting each other and the victors have been taking their stories to collect for some purpose. However, the defeated girls don’t die. Now, along comes a girl who kills Alice-users and burns down their place, saying she’ll make them beautiful. Art runs into this girl who calls him “Andersen” and wants to show him something (he thinks she wants to show thanks for the food and drink), but she begins to burn books at the library and tries to kill the librarian. Then Arisu Arisugawa shows up to fight her but is defeated. She slaps Art away and moves to finish off Arisu, but a trio of Alice-users show up to say the girl (Akatsuki Akane) will be arrested.

Basically, Akane is not an Alice-user but a (Hans Christian) Andersen-User. She hates Lewis Carroll’s works and kills Alice-Users and burns Carroll’s books.

I only have the Japanese editions of the manga, but it seemed pretty clear to me… but then again, I have the benefit of having watched the anime series and had read up on Lewis Carroll’s life.

WTF!?!!!!! what a perverted manga damn i’m not reading this manga now, now that i know what it is really about.