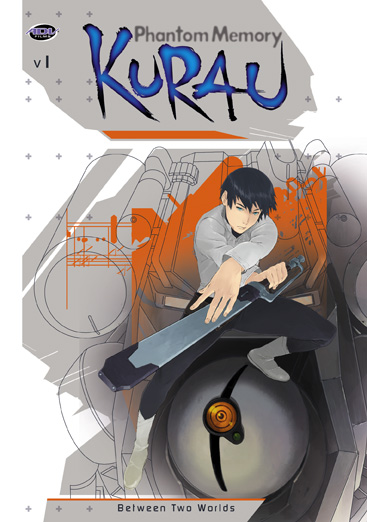 Story (from the back of the DVD):
Her name is Kurau, and in a world of mercenary agents, sheâ€™s the cream of the elite; a master martial artist and thief so skilled that no secret or objective is beyond her grasp. The greatest secret of all, however, is the one Kurau conceals inside herself: The freak result of a disastrous experiment with a new kind of energy, Kurauâ€™s body has been fused with a binary alien life form called the Rynax.

Every second Kurau lives is lived twice, one alien sharing her consciousness, the other still waiting to be born… and now none of those lives may last very long! The truth about Kurau has begun to leak out, a worldwide manhunt has been launched and now the ultimate agent is the ultimate target. From the craters of the moon to the most dangerous corners of the Earth, the action explodes at every turn.

Analysis:
Kurau Phantom Memory sorta reminds me of Binbou Shimai Monogatari, except in the future, and with super powers! At the end of the first episode, Kurau “gets” a sister and names her “Christmas.” Kurau and Christmas live a happy life together, though that life is always in danger when the government agency ties to capture them.

Most of the anime switches between happy home life and super-powered action scenes. The overall plot has to do with the origin of Kurau’s powers and the “birth” of her sister. The story feels really predictable. Kurau and Christmas are on the run, and Kurau has to leave Christmas alone sometimes to do her work. Eventually, Christmas will be alone at one point and she’s going to be kidnapped. Then Kurau will have to rescue her. Do I win a prize?

The animation quality is really good in the first episode, and decreases in the later episodes. There’s nothing to be ashamed of, BONES, it happens to all the studios. The action sequences are still really good, but Kurau and Christmas start getting drawn really ugly. I don’t particularly like the realistic look of the anime.

The Actual DVD:
The packaging for Kurau Phantom Memory is nice. It includes an insert with staff interviews and supplemental info about the series. Most anime DVDs I’ve come across have nothing but the DVD in the case, so this was nice.

The DVD itself only has a few standard extras like the OP, ED and an art gallery. What’s with these art galleries? Does anyone actually watch these? The character designs for Kurau are fairly ugly, so I didn’t get too much out of this.

Conclusion:
Kurau Phantom Memory is a fairly average anime. The animation is great at times, and ugly at others. The plot is entirely generic, though. Maybe some crazy plot twist will happen that’ll make the series go off in an entirely new direction. One can only hope.

Many thanks to ADV for sending me a review copy of Kurau Phantom Memory Volume 1!

If you want to watch the first episode, it’s going to be available for a limited time over at IGN.

I would say that your personal preference in artwork.. has absolutely nothing to do with the over-all quality of the anime…
Personally, I hate infintile chins, enormous eyes and exploding noses that appear as dots from a frontal view and giant triangles in profile but I wouldn’t base my opinion on the quality of something based primarily on the art style.

Kurau and many of the other characters, also actually appear to have nationalities and distinct facial features.. Most anime define characters by enlargeing the eyes and changing the hair style/colour.. If you took their hair away they would all look exactly the same.

I think you really cut it really short based on the fact that the artwork wasn’t to your personal taste. The first few episodes and the last few are truely the best.

The plot really isn’t generic either.. I don’t even watch anime but I go out of my way to see this one because there actually >is

I watched this not long after robin the witch hunter and felt them very similar in plot. They both had someone who inevitably became the hunted from the hunter because being somewhat “special”. I could probably gather more stories based on this idea in a different enviroment, yet kurau is still one of my personal favorite probably because of the sci-fi theme (next to planetes).