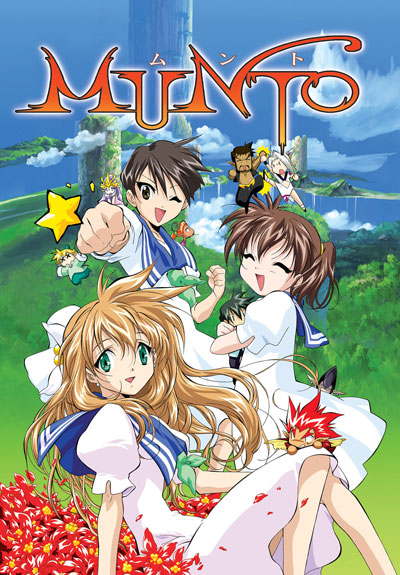 Story (from the back of the case):
Second sight is a curse for Yumemi, a psychic schoolgirl who just wants to be normal. The islands in the sky that only she can see have been nothing but trouble for her since she was little. But sheâ€™s about to discover the true value of her gift, when Magical King Munto arrives in her world, with enemies in hot pursuit!

Muntoâ€™s realm is linked to ours by a magic called “Akuto”, but that power is fading, and his world is on the brink of death. Yumemi is the only Earthling with the power to restore the Akuto of his world â€¦if she can only find the courage to use it!

Analysis:
The narrative of Munto jumps between the Heavenly world and the Human world. At certain points Munto will try and communicate with Yumemi, but otherwise you’ll see stuff happening in the world above, then the world below.

In the Heavenly world, there’s a bunch of cool fight scenes! This is where Kyoani used most of their animation budget, I suspect. Down in the human world there’s a sub-plot involving one of Yumemi’s friends getting “married” to a classmate. It didn’t really seem to me that there was any sense of connection between the two worlds.

When Munto did speak to Yumemi, all he kept saying was “give me your power! There’s no time to explain!” For some reason, at the end of the story, Yumemi and Munto seem to have developed some relationship. I don’t believe that’s possible from just Munto’s crazy yelling, though… Munto just seems like a pompous ass. In the end, I was more interested in the subplot with Yumemi’s friends than I was with her relationship with Munto.

As far as the animation goes, it looks really good. Like Kyoto Animation OVA good. It sorta reminded me of the animation in AIR more than their newer stuff. Some of the scenes looked so good I thought they were just watercolor stills, and then they started to move. There’s some really good looking stuff here, especially considering that this OVA was made in 2003.

DVD and Extras:
The DVD had a few standard extras like some art galleries and trailers. There weren’t any documentaries or anything though, which is what I’d totally want to see. Since it’s just a 50 minute OVA, the picture quality is excellent. I read that Kyoani originally released this on their website, so it makes sense that the quality is really good looking on the DVD.

Conclusion:
Munto seems to be one of those lost gems of Kyoto Animation. At least, I hadn’t heard of it until recently. The animation is sweet, even if the plot is a little disjunct. For $10, you might as well pick it up to make your Kyoto Animation collection complete. There’s a sequel too, so I might have to see if it improves on the original story.

Many thanks to Central Park Media for sending me a review copy of Munto.

IMHO the R1 DVD of Munto has crap video quality and is not worth the 10 bucks. 😛

And it doesn’t help that the story is quite a poor one – thought the Earth bits were quite nice and lovely, but Munto himself and his kingdom were crap – were we supposed to care about them? The sequel isn’t any better story-wise, perhaps the opposite as it focuses on the kingdom more…

This being, I believe, the only original Kyoto Animation work isn’t impressive at all. Quite disappointing actually.

Munto 2 builds on the original a little better–I liked the first Munto as well, but I think with so little time to work with the plot did suffer a little. At times it felt like they were trying to cram a 13-episode series into 45 minutes of air time. Munto 2 ends on a cliffhanger, but that’s good because it means there should be a Munto 3 and 4 to finish out the story and give it the time it deserves.

I liked the animation and the characters in the original Munto–if you liked the parts with Yumemi and her friends, that’s developed more in Munto 2 as well. Yumemi and Munto have still had barely any screentime together, but I’m guessing the next installment of the series will change that. Now the question is when will Kyoani work on more Munto, given everything else on their plate lately, we may be in for a long wait…