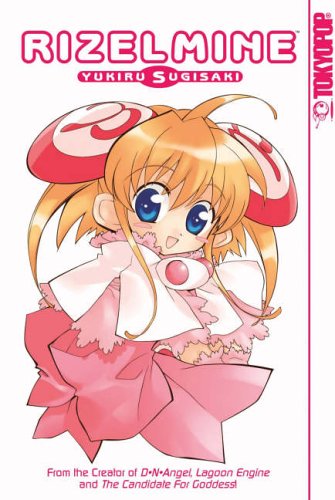 Story:
Tomonori Iwaki has just had his heart crushed. His hot teacher just got engaged. Iwaki’s always had a thing for older women, and none of the girls in his class really do anything for him. When he comes home from school, he finds out that he’s been married to a 12-year old girl named Rizel. The Japanese government has offered his parents tons of money, and so they agree to it as well.

Rizel is apparently made of nano machines, and explodes when she gets upset. Unfortunately, Iwaki hates Rizel so she tends to explode quite a lot. The plot seems to resemble that of Sumomo mo Momo mo a lot, but without the hissatsu. Will Iwaki steal back his teacher? Will Rizel remain with Iwaki forever? What are those things on Rizel’s head anyway?

Analysis:
I have fond memories of the anime series, and I think those memories have probably affected how I see the manga. A lot of the humor deals with misunderstandings between Iwaki and Rizel. Like he’ll be trying to rip his pajamas off her so he can wear them, but the Papas (government agents in charge of Rizel’s care) think his motives are dirtier. In the end, the story gets a little more serious, which is kind of lame. I would’ve preferred comedy throughout since I hate it when stories suddenly get serious for dramatic impact.

The brand of comedy is somewhat weird, which is the kind I like. For example, Iwaki will routinely throw Rizel. She just accepts it as her morning routine. At one point, she says that he threw her all the way to the neighboring town!

Character Designs and Art:
Rizelmine is one of the best drawn and designed manga I’ve read in a really long time. Seriously! The artist, Yukiru Sugisaki, also created D.N. Angel, another anime I really liked. I might have to pick up some volumes of D.N. Angel after reading this.

Rizel is super cute, and so is the class iincho. I honestly had to restrain myself from yelling “MOOOEEEE!” while reading this. The poses and everything are awesome. And the actual art quality is great through the entire book, too. I was really surprised by how good the manga looks!

The Actual Book:
The book itself is really short; only 132 pages. Moreover, Rizelmine is just a one shot manga. NOOOO!!! I really wish it was longer. I really like this series. I know the anime expanded on the plot a little bit, taking advantage of the many love triangles. I think that in the anime, the iincho liked Iwaki, but I didn’t sense that at all in the manga.

Also, there’s a couple of super sweet color inserts in the front of the book. Really nice. I noticed that Tokyopop translated one line as “You loli-con!” It’s pretty cool that they kept is as such, since I would’ve assumed they change it to “You pedo!” or something like that.

Conclusion:
Rizelmine is awesome. The story is funny, the art is superb, and Rizel is just freaking cute. I just wish there was more of it. You really need to get this if you’ve never been exposed to Rizelmine before. Period.

Thanks to Tokyopop for sending me a review copy of Rizelmine!

Hehe I bought the Japanese version a while ago..
I’m glad it got licensed.
It’s one of the very FEW of Sugisaki Yukiru’s FINISHED works
(God when is she gonna finish DNAngel?!?)

Well, it’s probably only finished because it lasted only one volume…

Well I never knew the manga looked better, way better, than the anime! Thanks for previewing it for the rest us, Hung, who couldn’t afford seeing the manga. 😀

132 pages was turned into 14 episodes? damn. why a one-shot deal? This is more enjoyable then DNangel. I demand more Rizelmine

i think its awesomeeeeeeeeee…………..
LOL. Rizel is so freakin’ cute! I could just EAT her up!