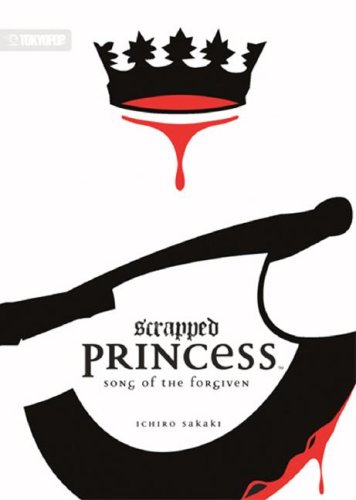 I seriously believe that 2007 will be the year of the light novels. You know, those books with occasional illustrations that a lot of manga and anime are based on? I took a look at the Scrapped Princess light novel, Song of the Forgiven. I didn’t actually realize it was the second book in the series until starting this review!

The Publisher Says:
Shannon and his siblings are squabbling as they continue on their travels. When they reach a frontier town, they don’t realize that an assassin has followed them in – and as a result, the inn is reduced to rubble! They’ll have to pay the money to fix it, but with no job, the three of them take up making mascot and maid costumes. But their lives don’t remain peaceful for long…

Analysis:
I was really surprised when I found out I had read the second book of the Scrapped Princess series first. I thought they were just using the storytelling strategy of starting in the middle… It did take me a while to figure out the characters, probably because I hadn’t read the first book yet.

The story is a mix of a lot of genres. There’s humor, drama, and action. I’d say there’s a good mix. Rather than starting with action (which would’ve been cool), it starts with some character building and comedy by way of a bread shop mascot battle. And crossdressing!

Before you know it, the two siblings Shannon and Raquel are fighting assassin after assassin. There’s also a lot of drama when Pacifica contemplates suicide in order to end her siblings’ troubles. The story goes back to action with a climactic end as the heroes attack a giant blob that’s literally eating the townsfolk they’ve made friends with.

I wonder if the story would have been easier for me to read if I had read the first book prior to this. I found that the first few chapters were a little difficult to get through. The second half of the book went by fast, though.

Conclusion:
Hopefully I’ll be able to read the first book so I can catch something I might’ve missed. Overall though, I thought that book 2, especially the end part, was some good readin’.

Thanks to Tokyopop for supplying me a review copy of Scrapped Princess: Song of the Forgiven.

I take it that you haven’t watched the anime adaptation yet then? ^^; It’s a pretty good watch, and Raquel remains my top favourite anime female of all times.

She’s like the… calmer and cooler version of Lina Inverse. You got to love a lady who apologises for overkilling on you.

“Impossible! How can your spells be so powerful!”
“You casted without chanting? WITHOUT CHANTING!?”

One of my favourite scenes was when she made an enemy Assassin EAT a truckload of humble pie by crushing him with a DEFENSIVE spell! He had been mocking her for not being able to attack him with offensive spells. 😀

She’s also well aware of her feminine attributes, and utilises them to her advantage at times. This is hilarious, because she is often depicted as being very innocent and conservative.

I really enjoyed the anime so I’ve been thinking of trying these novels; the only thing that puts me off is the potential for the writing style to be poor- .hack//AI Buster was a bit stilted and a preview I read of Kamikaze Girls (I think that’s what it was called) was so awfully written I could barely understand it.

Definately read the first book also. It’s a great introduction to the characters and background, as well as being a mostly self-contained story itself.

To Karura: I think the writing for SP was pretty good. It can be a bit simple at times and some of the action scenes are hard to describe, but it mostly works. The translation seems accurate.

ahh how funny, I just finished this book right before coming here and seeing this post!
Yes, I really enjoyed this book as well. the only thing is that it could get repeditive. Like this volume is somewhat similar to the first one. So hopefully the authour will shake it up a little in the next volume.

Scrapped Princess is one of my top ten favorites anime of all time. I even made a Scrapped Princess AMV several years ago, and also got my non-otaku friends to watch it, much to their enjoyment. I agree Raquel is quite awesome but she’s no Lina Inverse. I’d give examples but they’d just be spoilers to hung at this point.