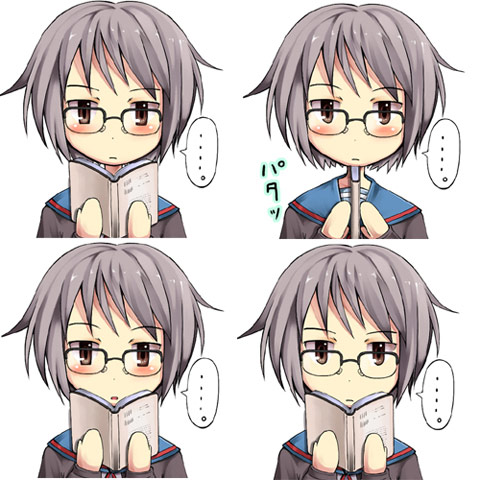 Wow! Thanks for parsing out the list like that! I think part of the reason there are so many American creators is that this list is aimed at teens, and a lot of Japanese manga (Air Gear!) may not seem teen-friendly to librarians. And also it’s a huge field and most of them are still getting to know it.

As for Antique Bakery, volume 1 is pretty tame. I think it was eliminated because it didn’t fit the time criteria.

Antique Bakery is not that BL-focused. If you read it for that, you’ll be disappointed! It’s more about the owner of the bakery… and the cakes!

Hmmm. I didn’t actually read Antique Bakery. I just checked out the official page and the Wikipedia thing. It seemed to be the main plot point to me, but I guess I’ll just have to take your word for it!

I read Bizenghast, that gothic horror one. I should probably read some more American manga…

If you feel like checking out something American, Inverloch is also an ongoing webcomic.

Tokyopop was expending a ton of effort for years in order to create American manga market (where they would reign supreme, naturally). They hoover just about anything, to the point that people created projects specifically with the exit strategy of selling to Tokyopop. Sometimes the quality would immediatelly plummet thereafter… cough cough Van Von Hunter. This is a veritable whirlwind. If you are remote from it, count yourself fortunate.

For God’s sake, READ DRAMACON! It’s definitely the best “Global manga” or Amerimanga, or whatever the hell you want to call it. It definitely deserves a place on that list.

That said, DN, Monster, and Nana are all really good too. Can’t say I’ve read the others.

Hello! Just saw your post, linked from Anime News Network, and as a member of the Great Graphic Novels for Teens Committee, I just wanted to clarify a few things

Also, just to say — if you’d like to see more manga considered for the list, please remember anyone can nominate titles for consideration! The current year’s committee will be acccepting nominations starting March 1st, so let us know what you think deserves to be on there (manga or otherwise!). We all work hard to try to keep track of what’s out there, but we can always use the help from fans.

Speaking for myself, I tend to consider manga-style comics, or American manga, or whatever you want to call them, on their own terms. I try to ignore the “manga” label for these and concentrate on whether it’s good story. The manga-style comics I’ve seen marketed that way always feel a bit more like independent comics with manga influence rather than really fitting neatly in with what manga is. That’s my take on it — so, for example, I didn’t really think of Inverloch or even Sorcerers and Secretaries as manga — more of a manga-inspired hybrid.

@RobinB: Thanks for the feedback! I’ll definitely remind people to put in nominations. This is actually the first time I’d even heard of the YALSA, so I never did any nominations before.

I’m glad the list is receiving attention, and we’re always happy to hear discussion about it. It’ll help us make even better lists in the years to come.

FYI, here’s the site for the list — when the nominations open, this is where you’ll nominate titles for consideration:
http://www.ala.org/ala/yalsa/booklistsawards/greatgraphicnovelsforteens/gn.htm

Also, on Antique Bakery, I forgot to say this yesterday, but AB is not BL or yaoi. I heard this through the grapevine from the creator herself — she does not consider it BL, and I also can see why: it’s not a romance, but more a comedy about creating a family from friends.

Of course, I think it appeals to BL readers, but I think she’s correct in not categorizing it as BL, as I think it might disappoint someone looking more for romance.