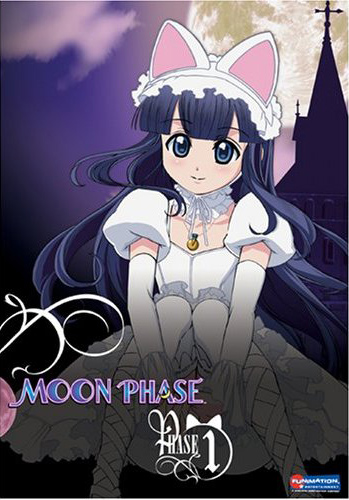 Kouhei is a top paranormal photographer. The only thing is, he can’t actually see ghosts. He’s sort of immune to them, though I guess that makes him really good at getting them on film. On one photo excursion to a haunted castle, he spots a beautiful young girl on top of the castle’s roof. He investigates further and ends up rescuing Hazuki, a vampire who was being held captive.

Hazuki decides to make Kouhei her slave/servant by initiating a blood pact with him. Unfortunately for her, Kouhei is immune to this kind of thing. Her evil eye doesn’t even work on him! Regardless, Hazuki somehow manages to move to Japan and starts living with Kouhei. She keeps treating him as her slave, even though he has full control of his actions.

Apparently Hazuki wasn’t always stuck in the castle. She was abandoned by her mother one day. Together, Hazuki and Kouhei try to figure out where Hazuki’s family is and figure out what the heck was going on in her past.

The anime sounds kind of serious, but for the most part, Tsukuyomi is cute fluff. Like the first two episodes are way serious, then there’s just a bunch of cute episodes with occasional seriousness injected in for variety. I actually prefer the cute stuff to the serious stuff.

A lot of the entertainment comes from Hazuki fighting with Kouhei. It goes like this: Hazuki orders Kouhei to do something. Kouhei doesn’t do it. Hazuki gets all mad because she can’t order him around. Repeat. As you can guess, Hazuki is a total tsundere. There’s also some dumb gags, like when Kouhei offers Hazuki some tomato juice in lieu of real blood.

Things do get a bit more serious in the last episode when Elfriede shows up and tries to get Kazuki to go back to the castle. They totally sabotage it by making the rest of the episode cute again.

While the animation by SHAFT (who also did the Pani Poni Dash and Negima!? anime) is excellent, the DVD video itself seemed kinda grainy to me. Maybe it’s because I was watching it on my computer LCD?

I checked out the English vocal track just for kicks. It really wasn’t too bad. Hazuki’s voice was a bit annoying, though, and Kouhei had some weird accent. The script was changed quite a bit from the original, too.

The only thing that really bugged me was the next episode previews. In those, Hazuki gives a riddle and answers it at the end of the preview. Funimation kept the translation of the riddles in the subtitles, but decided not to add any cultural notes. Like one of the riddles is “which animal always relishes its food” or something like that. The answer is a goat, because it says “umeee” which sounds like “umai” which the Japanese sound that you make when something tastes good. The English versions just make up new riddles, so I guess it really doesn’t matter that much…

The DVD comes with some pretty cool extras. The coolest ones are the postcards that came with the DVD. I guess since there’s no “special edition” they’re just packing in some extras with the normal one. There’s also the standard extras like creditless OP and ED, as well as character profiles. 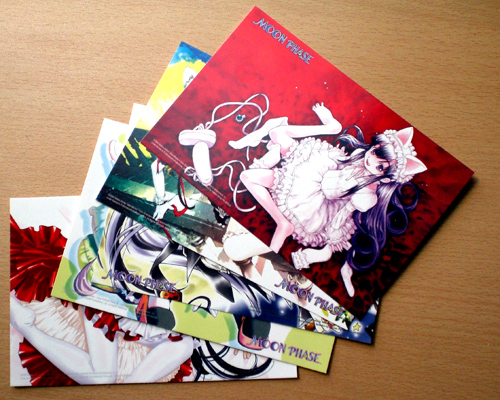 Tsukiyomi Moon Phase is basically a really cute anime that tries to have a somewhat serious plot mixed in. Right now it’s too early to tell if there’ll be a payoff for all of the serious parts, but I’m enjoying the cute stuff.

Many thanks to Funimation for sending me the review DVD of Tsukuyomi Moon Phase Volume 1.

It doesn’t really seem as if there’s 25 episodes worth of story in that series concept. I fear it’s going to turn out to be like Maburaho where there’s lots of useless filler.

Actually, there is an SE of the first volume – it comes with a box and a little folder to keep your postcard-thingies in.

Leave it to Digikerot to school me on anime merch. I thought that most of the time, those postcards and stuff usually only come in the special edition anime box sets. Either way, it’s nice of them to include the postcards in the normal edition.

i’d get it just for the folder hehe

I only know about the SE because, strangely enough, I’ve got it ^^;

BTW, you mentioned the grain – I was watching Vol 2 last night, and I suspect what you are mentioning as being grain is actually compression noise. The videophiles over at AoD are always complaining about Funis video quality, but I have to admit this is the first DVD I’ve actually noticed these issues with. I suspect the large areas of flat colours which show up so often in Shinbo-directed shows make it far more obvious than in others.

this anime is soo freaky, can i really say that the plot is any good without puking. the graphics are really nice, but the plot just seems boring, i find her a bit stuck up and too out there. she’s almost annoying to me.